Yesterday we also went walking around the city, with the goal of getting a track phone for me with a Bosnian number, a task which was promptly accomplished, after which we just lost ourselves in the city. Though the day before had been cold and few people out (it was less than fifty degrees), yesterday was a warm 70, and the streets were packed with people roaming and eating gelato.

Cafe Minjon (pronounced “minion” made me laugh, because who doesn’t love the minions from Despicable Me?

We walked past the mosque during the call to prayer:

But it really is a beautiful mosque, parts built centuries ago and reconstruction done post-conflict.  The burial grounds extend far beyond the walls of the mosque and the roadway was built passing through it, so across the way you can see clusters of very old gravestones (someone was buried there in the late 16th century) surrounded by a park.

The mosques here do a wonderful job of establishing space, a quiet, peaceful, lush space of serenity in the midst of a bustling city center. The churches do the same, but the churches create that quiet space within them, whereas the mosques extend that space around them, something I much prefer. 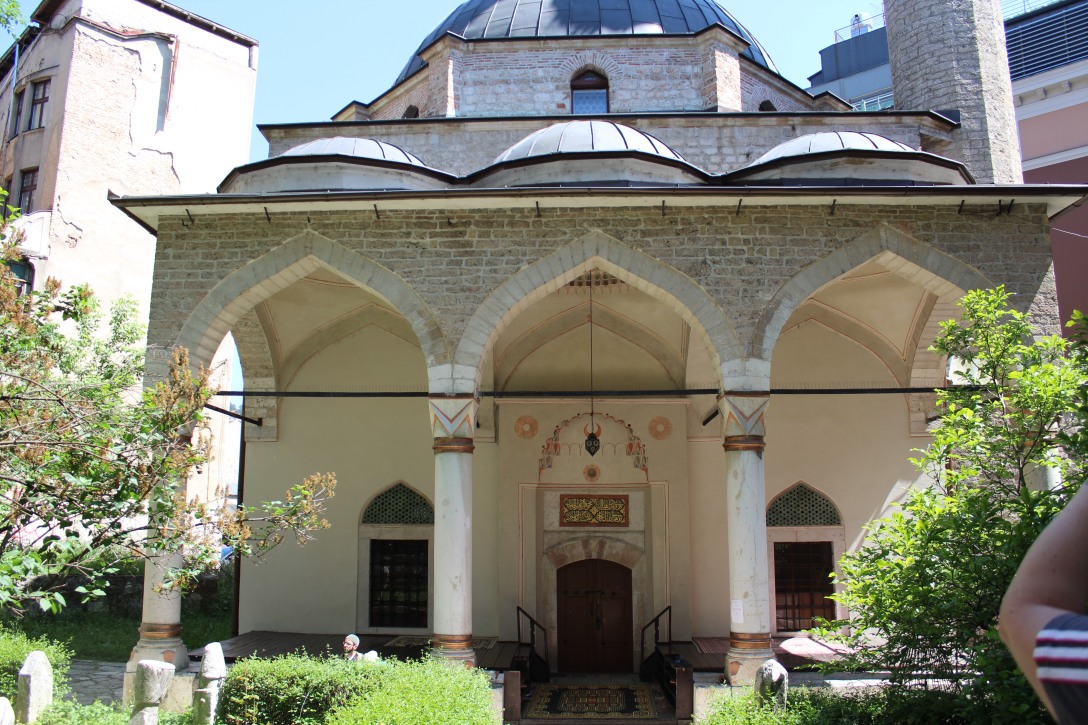 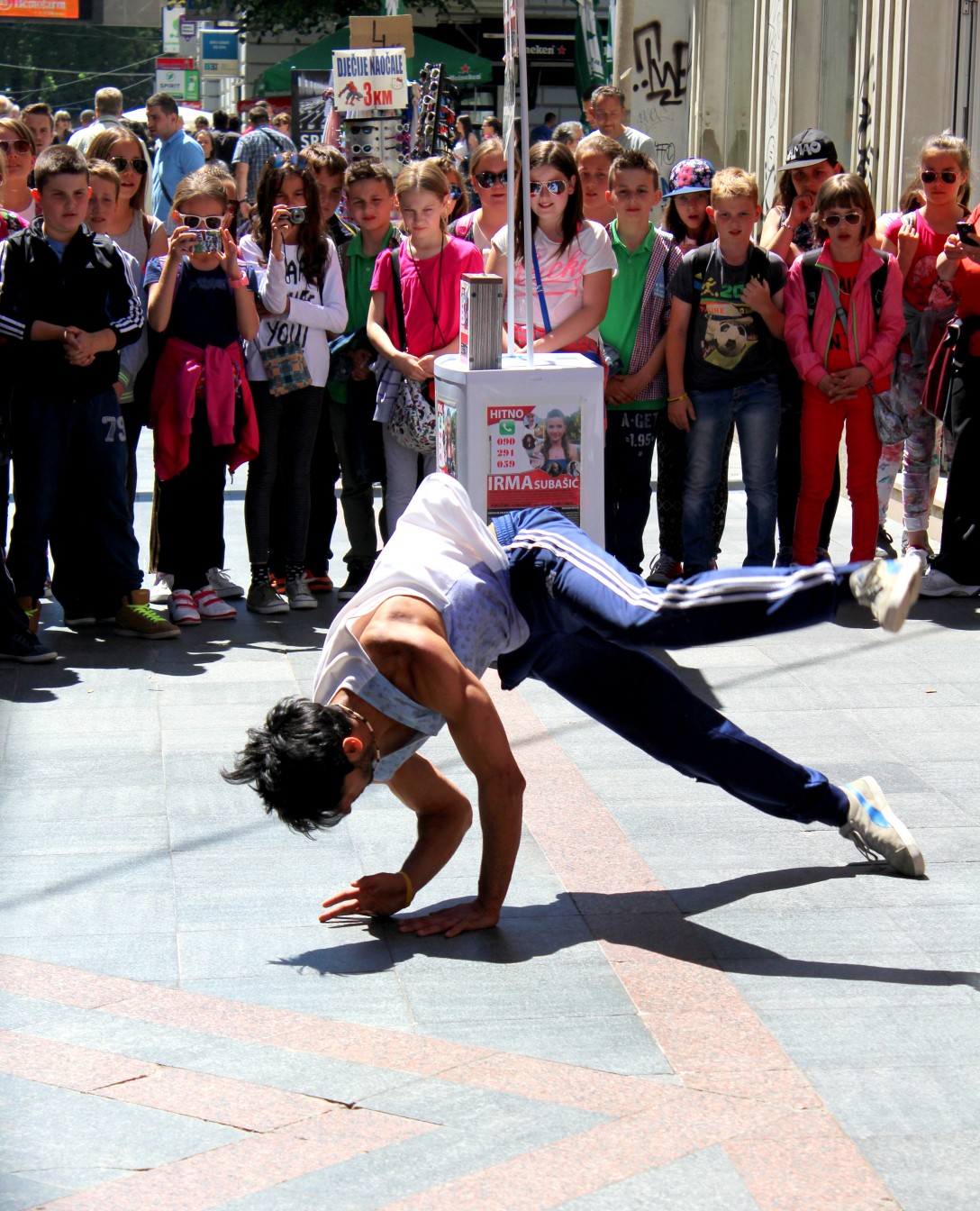 We ran into some break dancers, one of whose pants gradually came off (I really think it was quite intentional, he surreptitiously unlaced his boxers by the corner before he did his last flip) 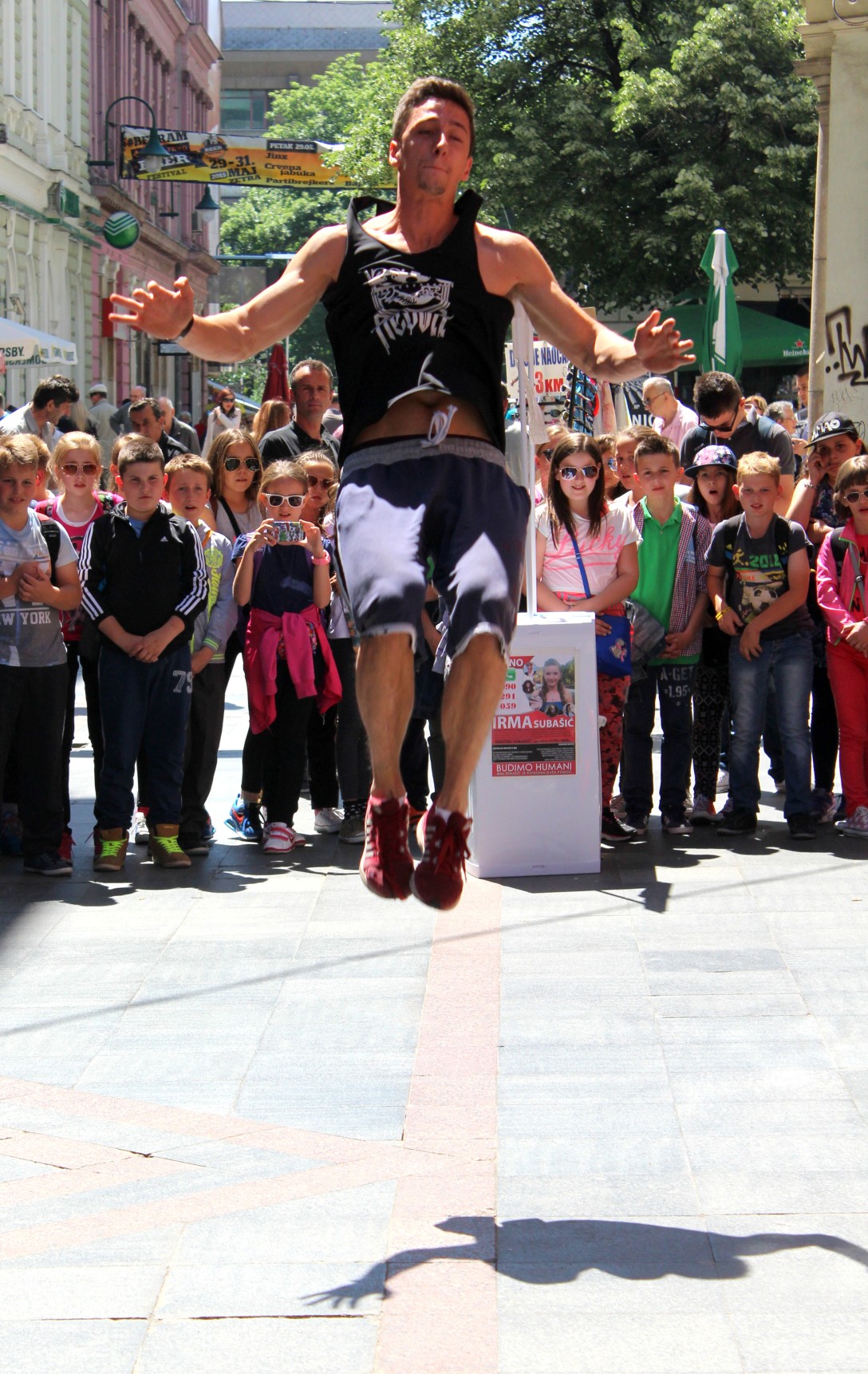 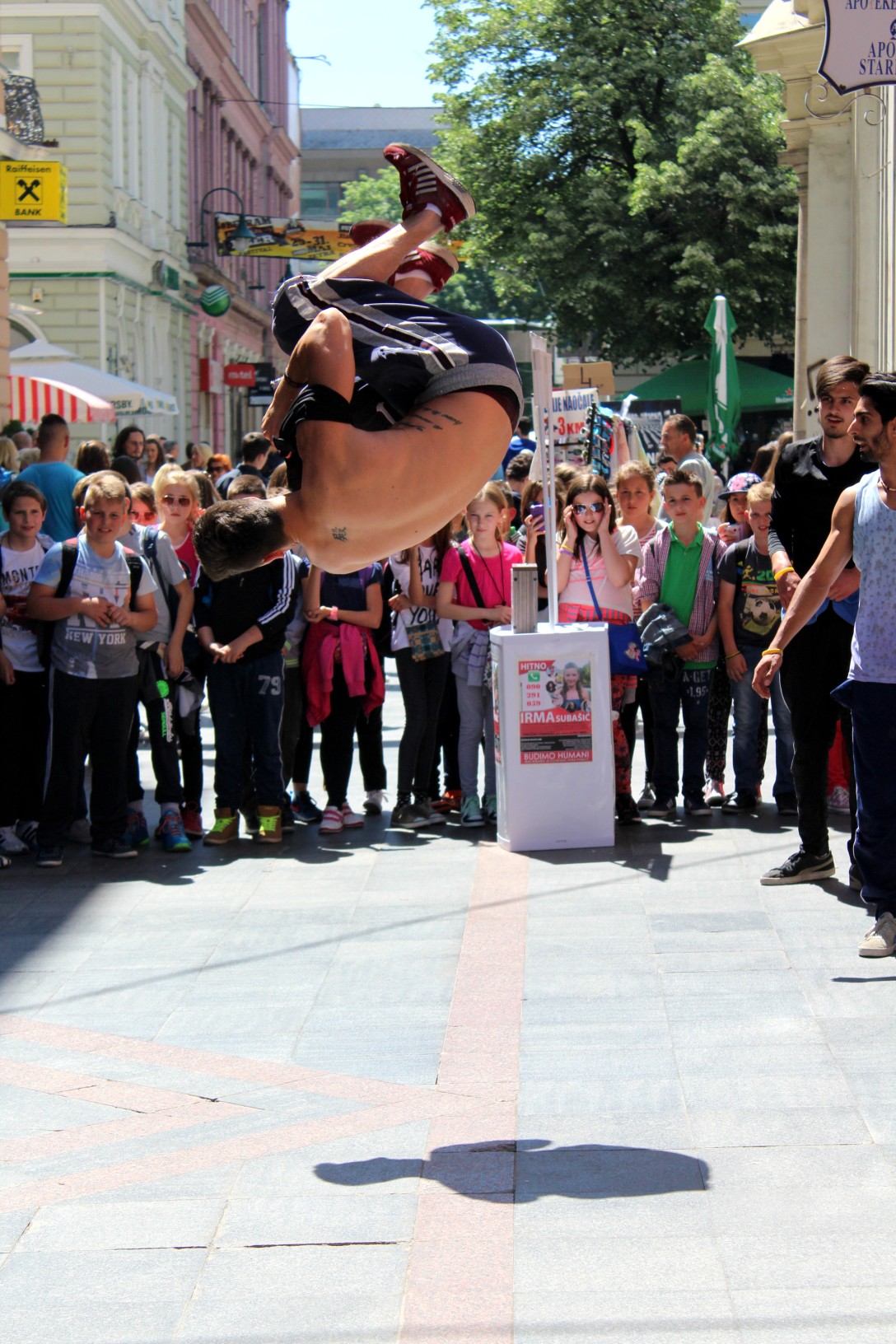 I also love all of the outdoor seating and bright colors, because it’s all so inviting and coffee is served everywhere (indeed, it’s actually harder to find food than coffee). 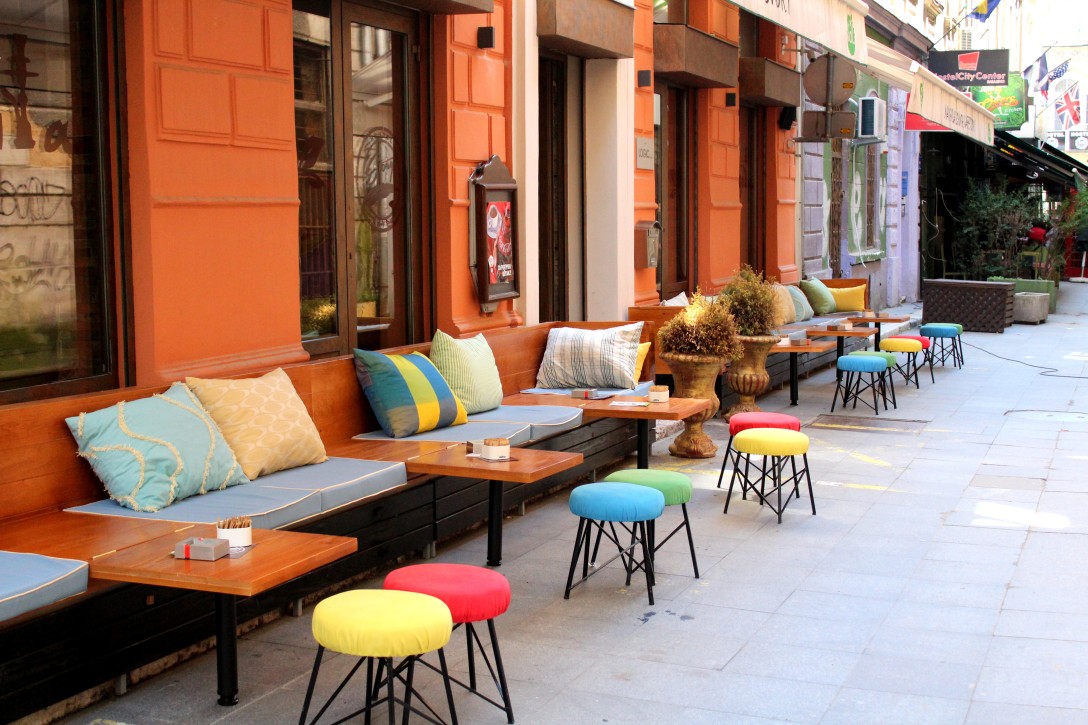 We ate lunch at a small place and each had spinach pie, which was fantastic (think similar to spanikopita but better). We also met a German working for the IMF, and he was pretty cool, asking if we were with USAID before realizing that we were, in fact, not.

And then we traipsed the market again because why not. 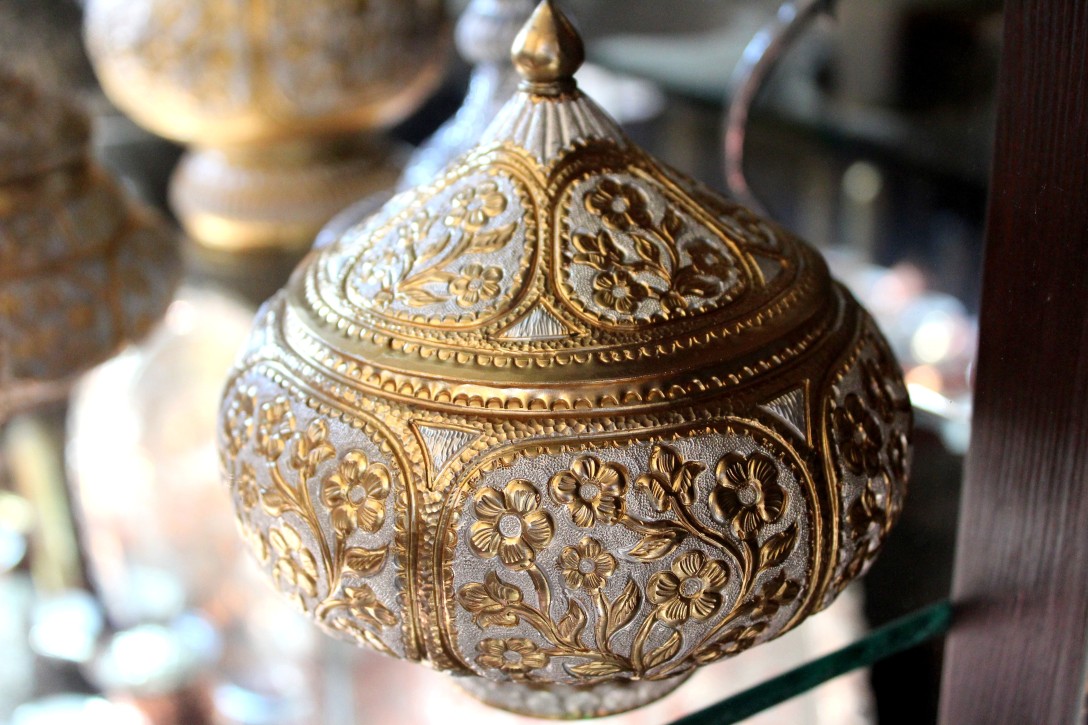 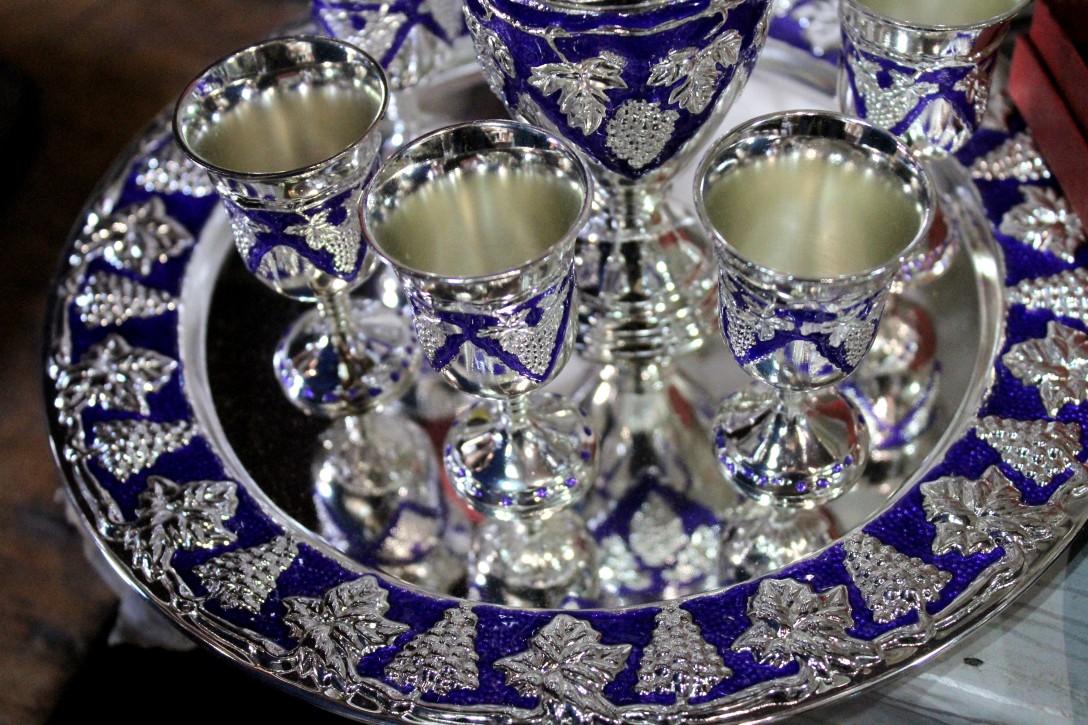 The colored plates above begin like the copper plate she’s holding, which they coat with silver and then etch a design. After they coat it with metals and etch, they finish it off with bright colors, and no two plates are the same. 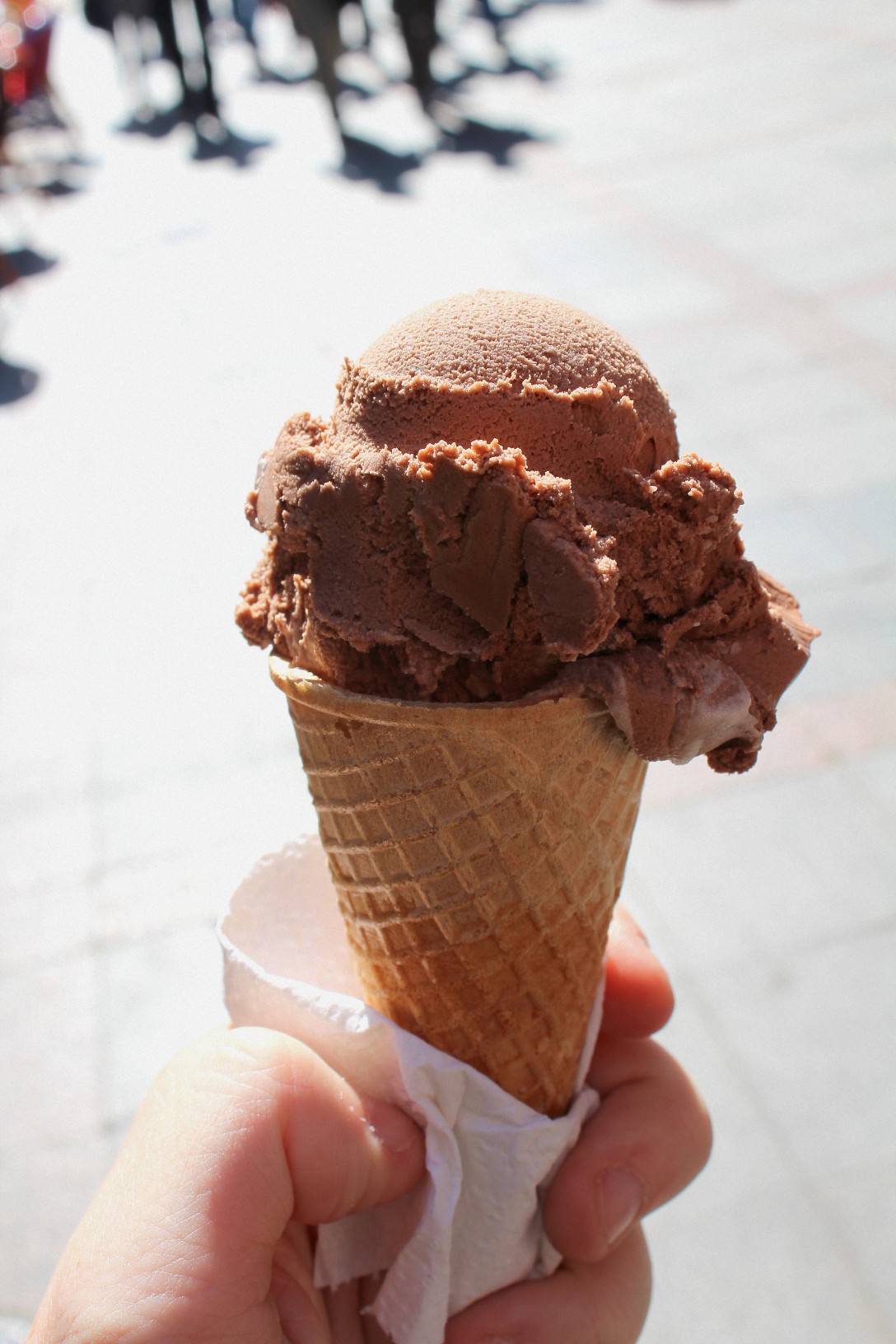 Then we stopped for gelato (this is traditional chocolate, but Maggie got Nutella), which is the equivalent of 50 cents and is a perfect walking snack. 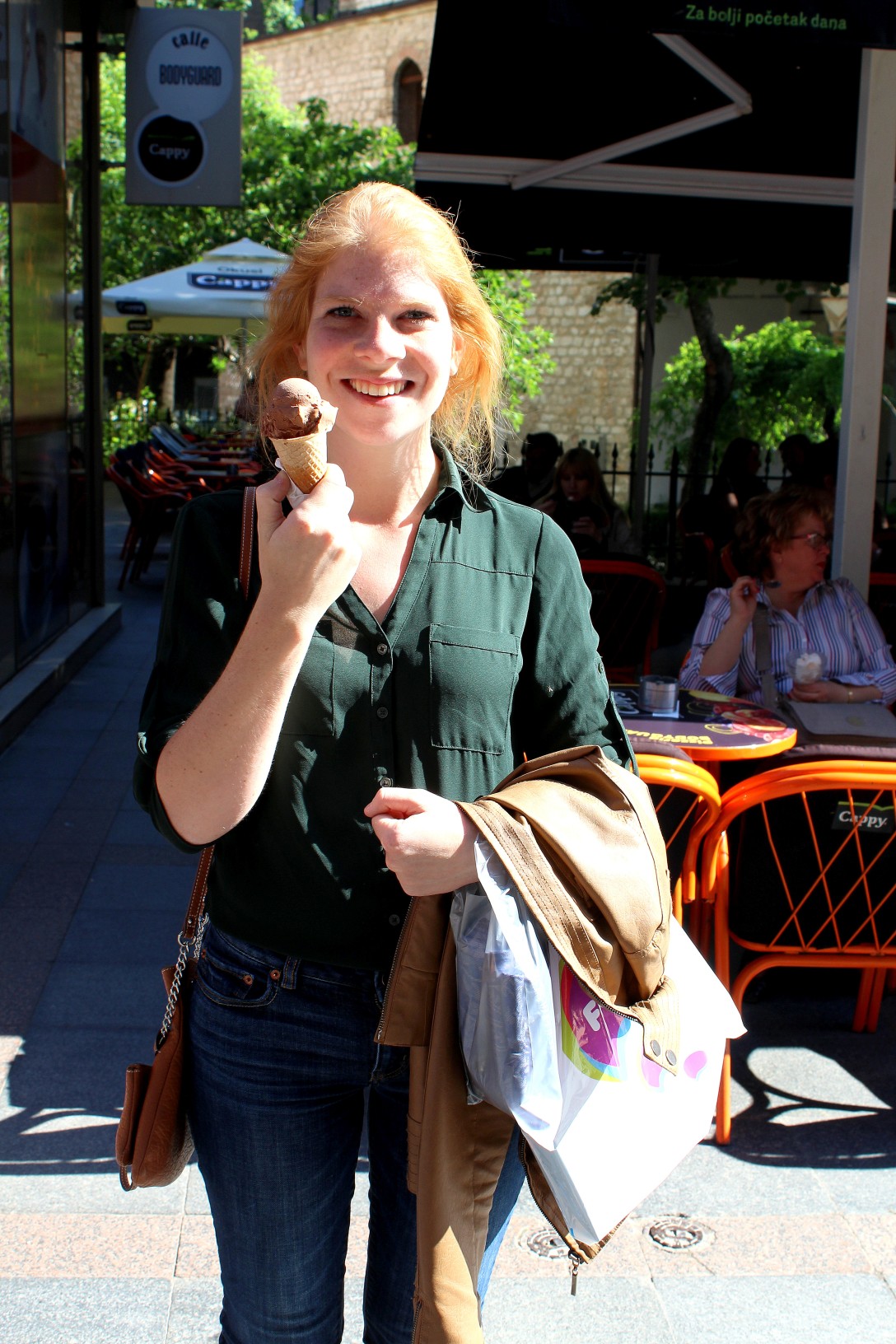 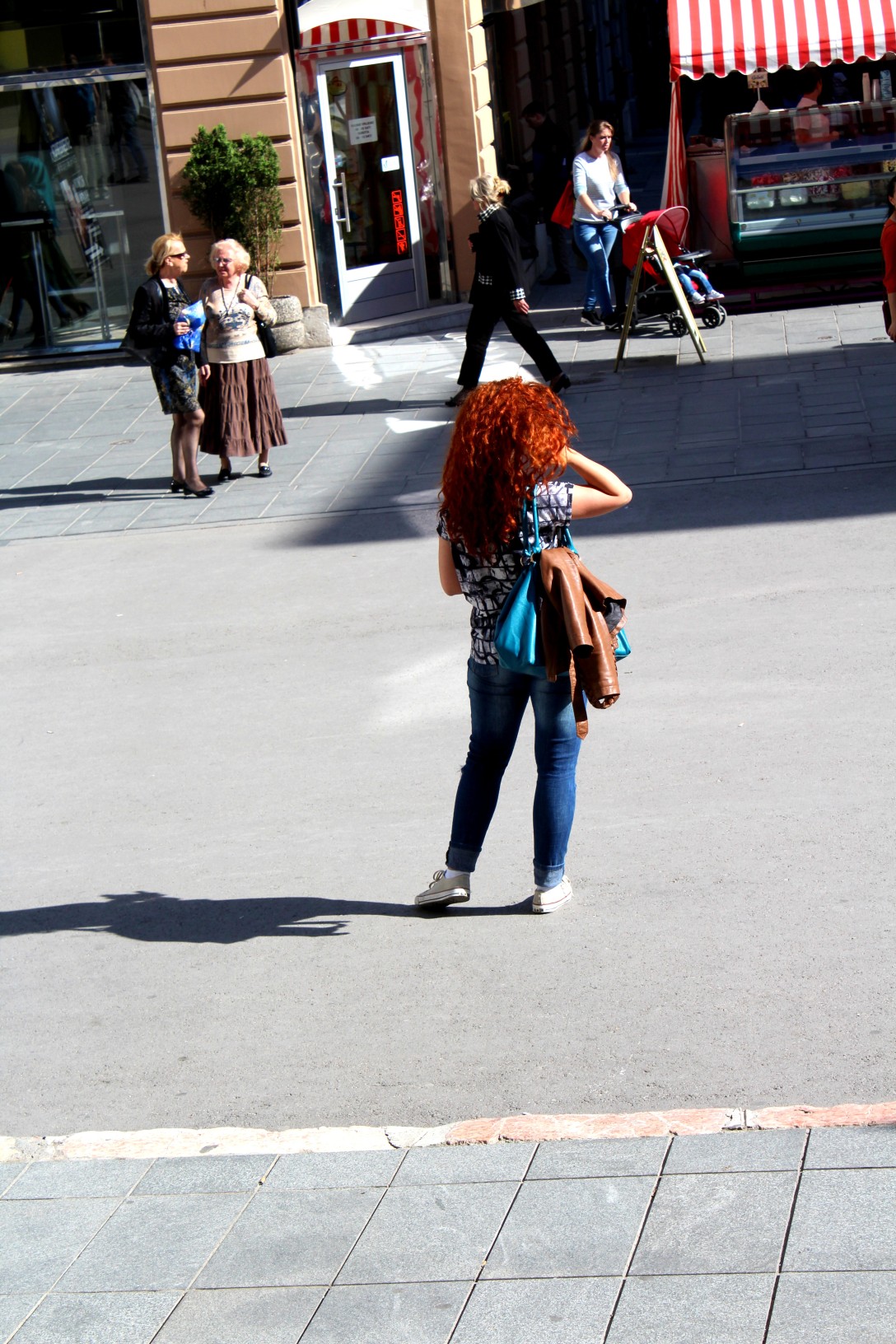 Before exploring a really old Catholic church where I only got a few pictures because technically I wasn’t supposed to be taking them. 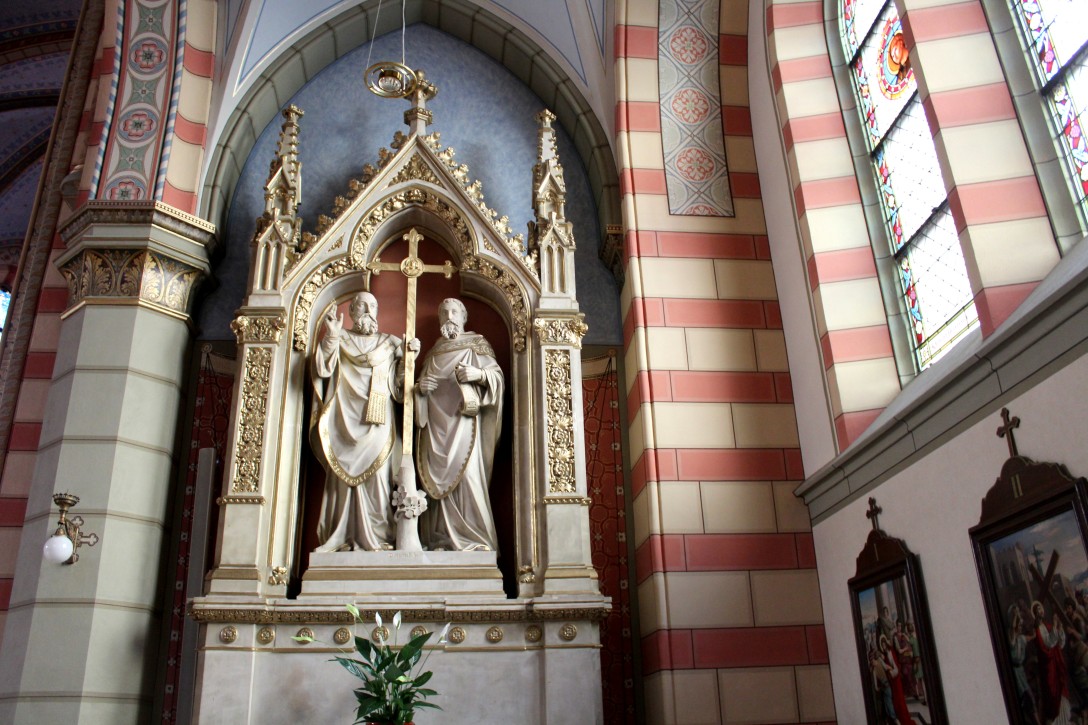 We made our way back home, stopping at this monument to the fallen children in the conflict. The silver cylinders have the names, birth dates and death dates for all of the children (and spin so the other side is covered, too). Though it’s no Diary of Anne Frank, if you want a child’s perspective of the Siege of Sarajevo, Zlata’s Diary is a good first-hand account from a very young girl. 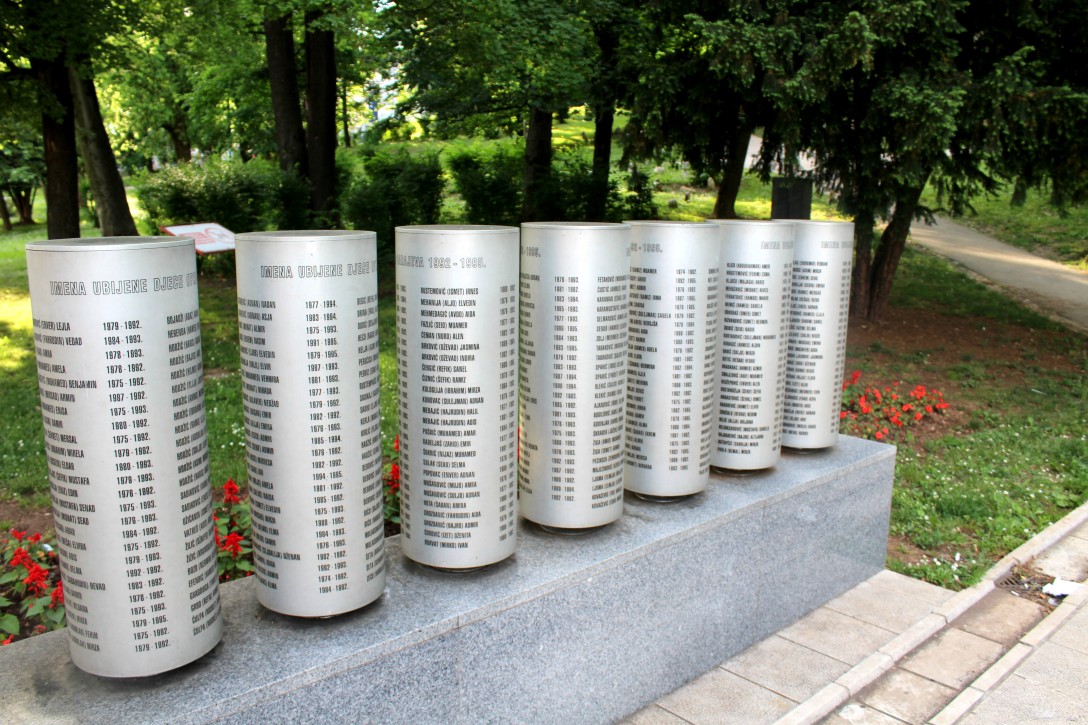 Lastly, near our hotel is an area where you can still see mortar shell marks. Maggie counted 15 between the intersection of the road and the market she went to to get shampoo, but you can see entire sections of walls that had to be rebuilt around the area as a result.

And finally, these girls randomly asked that we take their picture and posed for both of us, though I don’t know why because it’s certain that they’ll never see these pictures… either way I’ll put them here to do them justice. 🙂