We’ve kind of fallen into a routine here in Bosnia. From 9am to 1pm every morning we have our internships; from 2pm to 4pm we have briefings with officials, diplomats, and NGOs; and from 4pm to 6pm we have class with our professors. Monday is Balkan History, Tuesday Balkan Security, Wednesday Genocide Studies, Thursday is Peace and Statebuilding, and Friday is Bosnian/Serbian/Croatian Language.

Tuesday Drea, my intern partner here from Mexico, and I went to a meeting at BIRN, our internship. BIRN is a transitional justice organization that upkeeps Balkan Insight, a source in English for Balkan news (the primary one); Justice Report, a website that follows the aftermath of the conflict and the trials of war criminals in the Hague; in addition to releasing reports, studies, media campaigns, and documentaries. This meeting was a short meeting establishing what BIRN does and gauging our interests and abilities, after which we went to lunch and class.

After class, we went to a really awesome small cafe unlike anywhere in the city and rated in the top ten places to go in Sarajevo by Lonely Planet and Travel Advisor. It looks nondescript on the outside, and you walk inside and it’s like a Sarajevan Amelies for coffee and wine.

The tables are stuffed with money and autographs from all over the world. 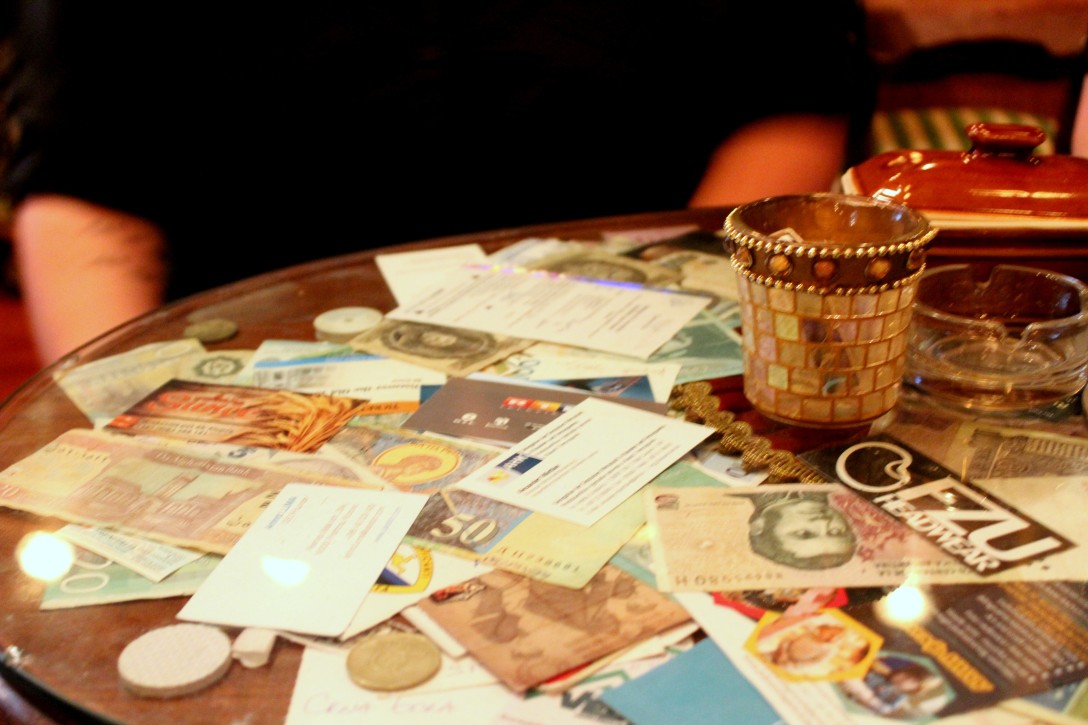 The menus are written on random books- cartoon or otherwise. 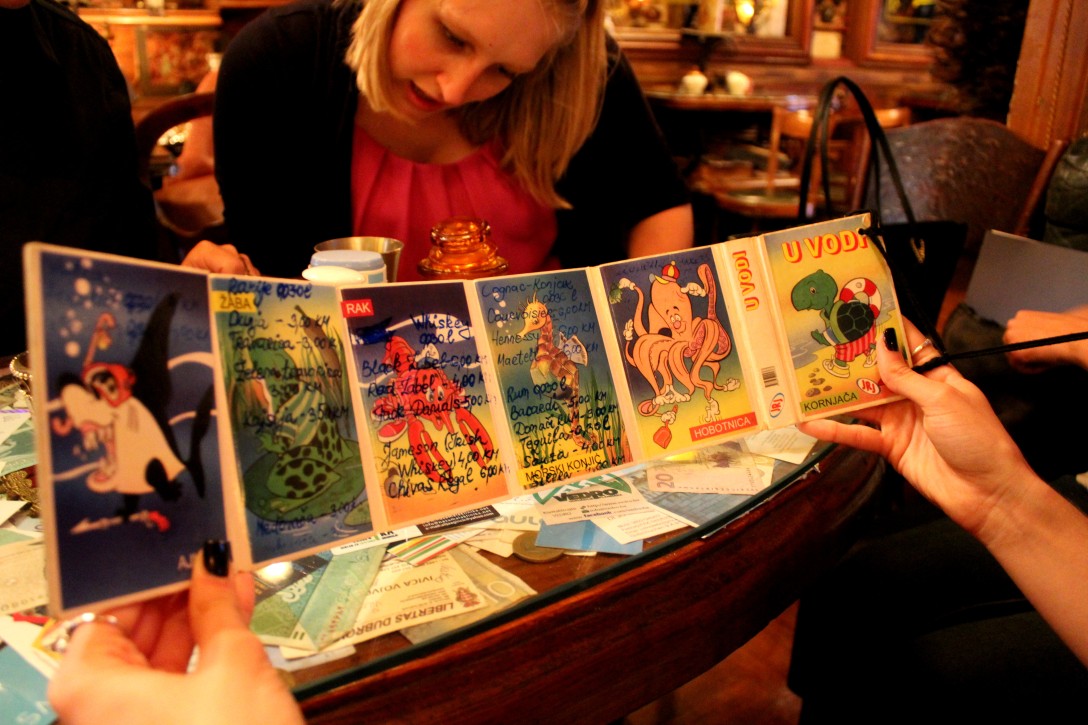 But if you can’t read that, it’s written on the wall.

We started with coffee, and I got a chocolate cappucino that was delicious and served with these delicious gingerbread cookies (normally, coffee here isn’t served with anything except Turkish Delite in some cases).

We also got wine- I think this was from a Bosnian city called Mostar, but I could be wrong- served in small glass pitchers with olives and cheese.

The next day we went to our internship for a short period- today’s gelato was berry- and I took bench pictures just to show my dad (also everyone else, but mainly Daddy) that here, benches fold up unless you want to sit on them.

(I can’t get over how beautiful this mosque is in every light).

Some students from the university asked us to go out with them, so we spent the time after class at a bar. In Colombia the most well-known drink was aguardiente, which tasted like licorice vodka; here, the drink is rakija (pronounced rah-kee-yah), which comes in various flavors but the most common is plum.

Thursday was the first full day of our internship.

Quite hungry and tired, we picked up cappucinos and chocolate croissants before work. You can tell Drea is happy with the size of the cappucino:

(but really it’s tiny, I’m so used to sipping one latte all day long, but this is paramount to Olaf’s reaction to his carrot nose)

This is the entrance to our school here: 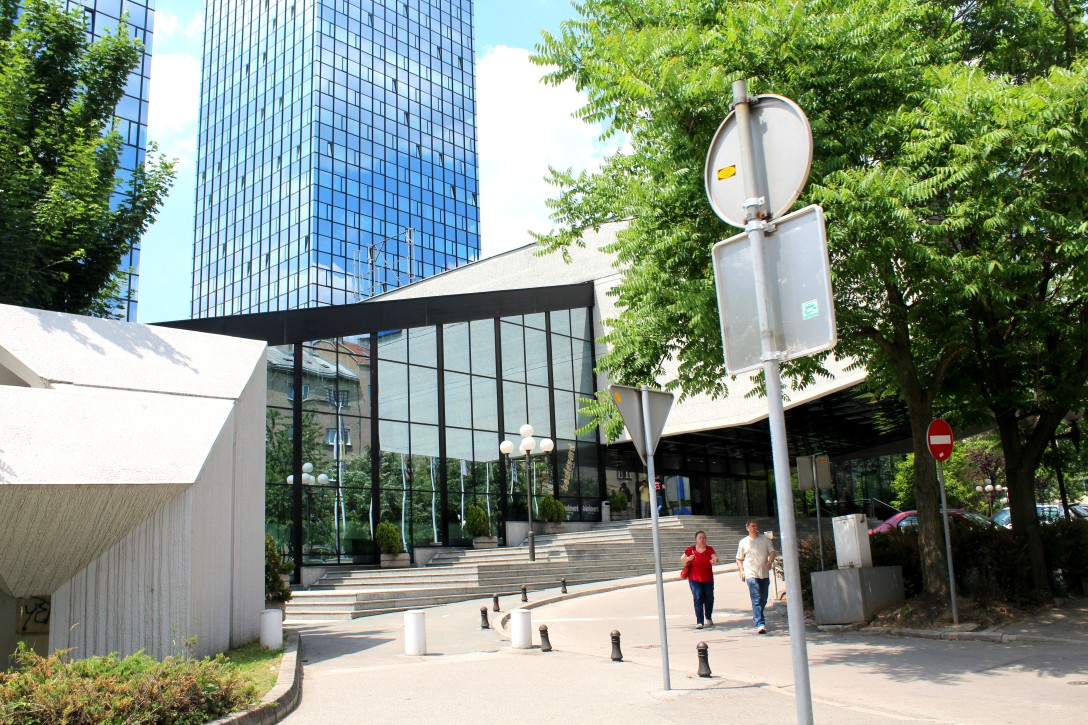 After Peacebuilding and Statebuilding, we were starving and so went to get food. I had an appetizer of the most delicious banana gelato (the best banana anything I have ever had).

I made friends with a stray cat (there are stray animals everywhere here, though the dogs aren’t dangerous unless you run into a pack of them around dumpsters at night, which I avoid).

And we had cevapi. Here it’s common to drink yogurt plain as a refreshment, a practice I was entirely unfamiliar with. It’s like an unsweetened, thicker buttermilk and is made by leaving milk to curdle for a long time after milking the cow (Merima, one of the students here, used to live on a farm in the Bosnian city of Brcko before moving to the States in 2000).

And, because who ever wants to go to bed in a city like this, we went to get coffee and hookah. I have a feeling that Bosnians drink a lot of coffee to stay awake from being tired because they can’t sleep for all of the coffee they consume (it’s all straight espresso).

Anyway, this hookah place is a courtyard of three or four hookah establishments, covered in carpets and cushions, lanterns and hanging baskets, and covered by a ceiling of lush leaves from the giant trees that grow around the maze of seats.

We ordered Bosnian coffee, in order to try to drink it properly now that we had Merima with us.

So you skim off some foam from the coffee, put it into this little cup, and pour the rest into it:

Then you dip your sugar cube into it (be careful, it’ll disintegrate if you do it for too long), before slowly biting the sugar as you sip the coffee slowly. 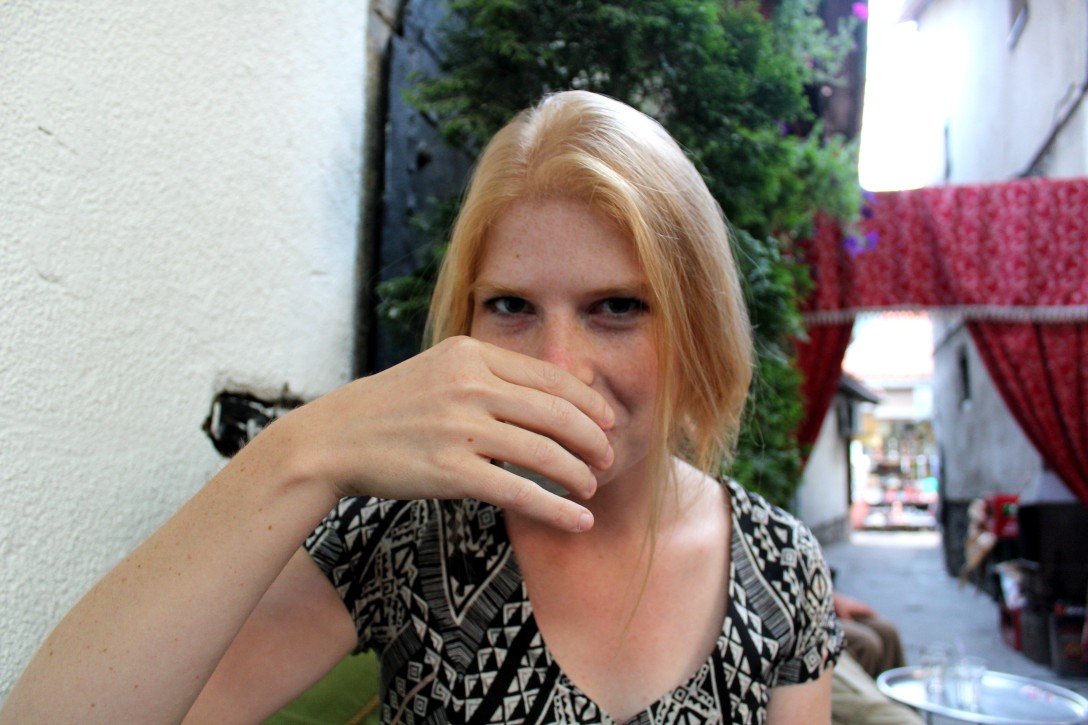 I didn’t realize you were supposed to do one cube per cup, and my sugar cubes were quickly gone. Lessons learned.

We also had peach and mint hookah (the mint was wildly refreshing).

I tried to do smoke rings. This was the result.

These turned out well, though.

This is Amna, from Texas:

Lilly, who goes to school in Kentucky:

And Jackie, from Wisconsin-Milwaukee. 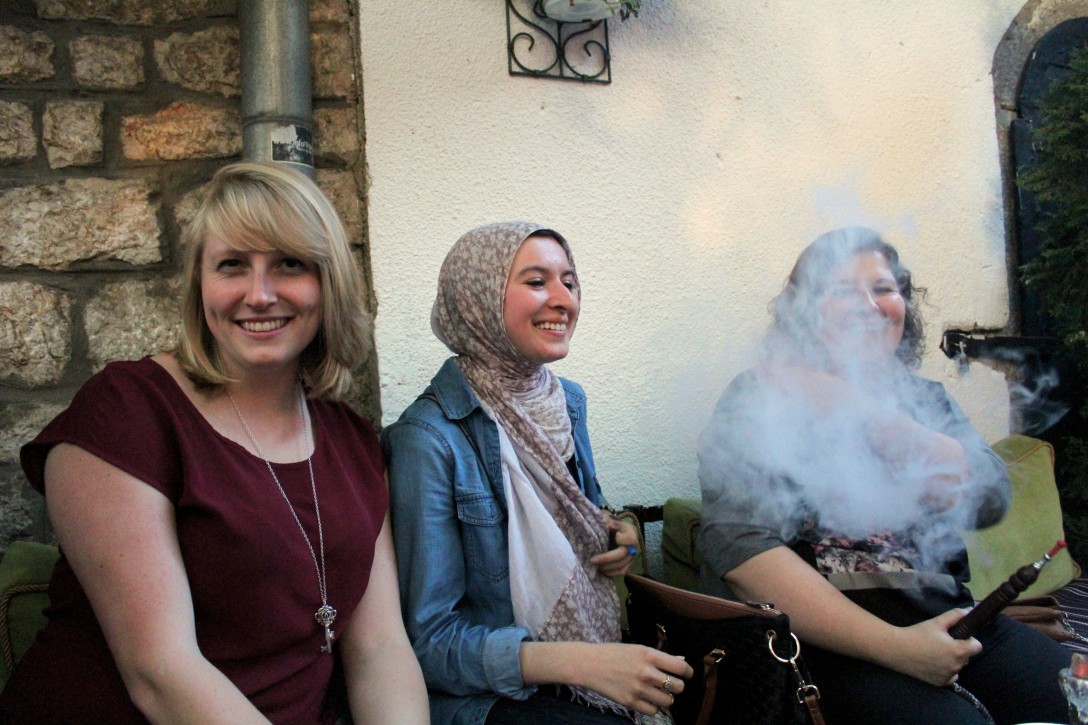 As night falls, the lanterns turn on, the hookah smoke mixes with the cevapi smoke, and the air (it’s rarely humid here like at home) becomes crisp and cool, and you forget coffee has caffeine and you probably shouldn’t have sipped three cups in the past few hours. 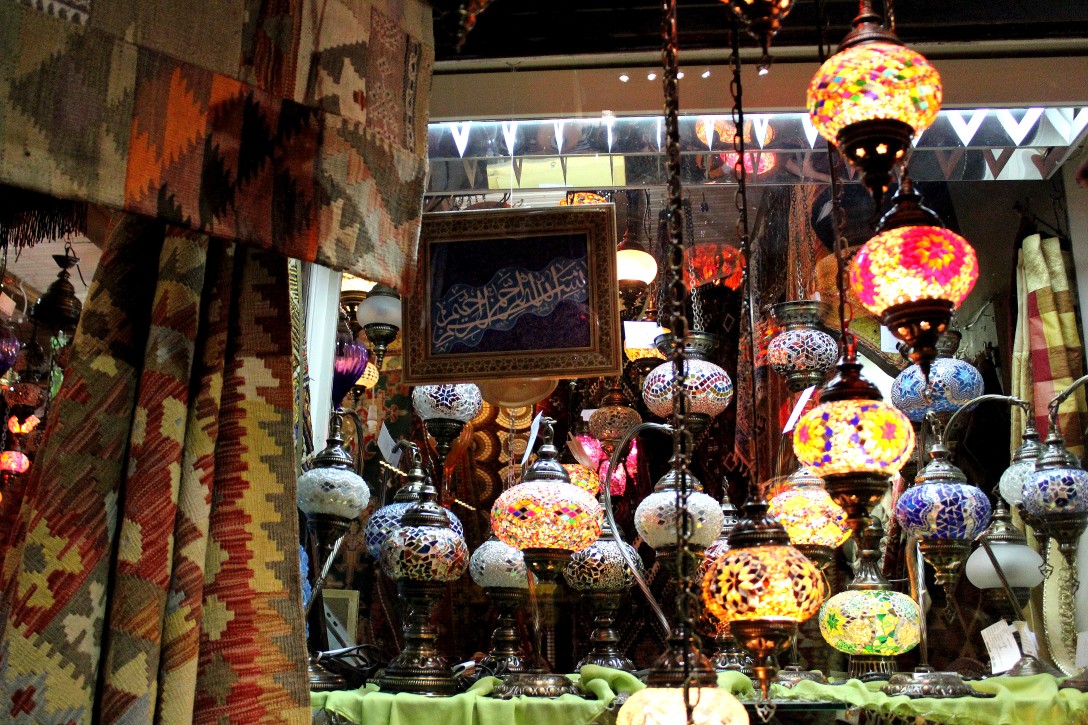 In Sarajevo, time runs away.

Today I saw the Pope and I’ll have a post soon about that!