Our days have more or less turned into a routine. Halfway through this week, our internship told us they didn’t really need us until this Tuesday, so we spent more time traipsing around. Usually though, I wake up, ride the tram to my stop, walk to my internship, get coffee and croissants with Drea, intern, and then, if we have a briefing with an official, we both go straight to class. If we don’t (like this Monday), I usually walk to the Old Town to get lunch with a group of people.

This bird was having the time of his life with these miniature dams, walking along the edge and at one point sliding off into the next segment, and even though we don’t learn the Language of Birds in school, you could tell he was quite content with his playground. 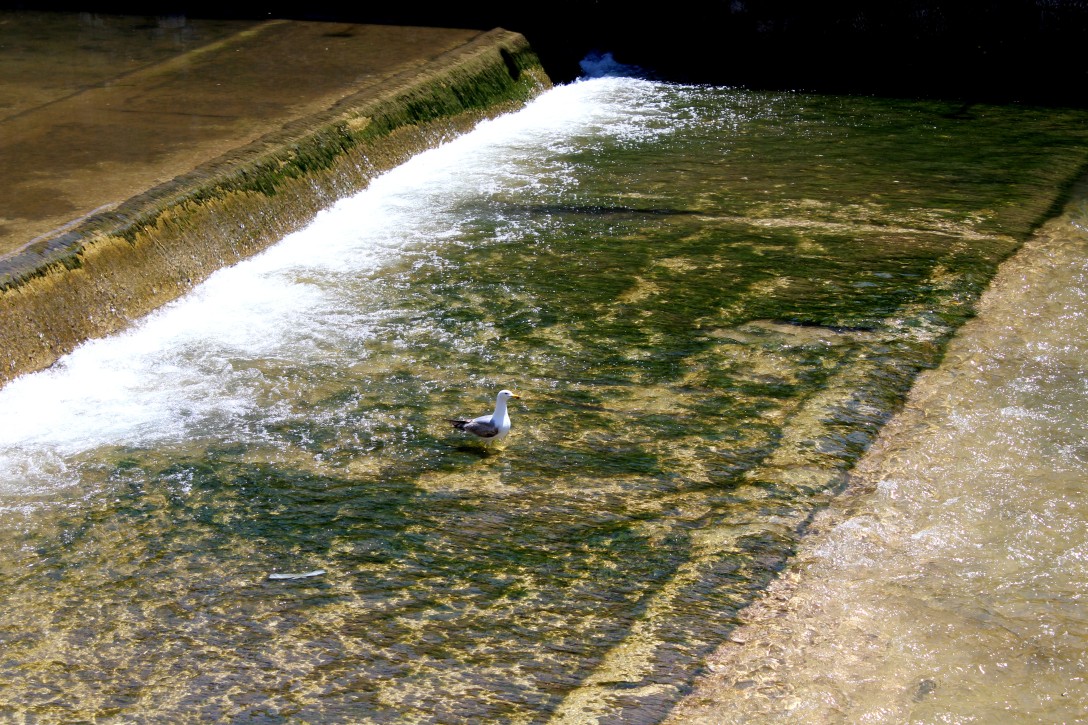 The walk to Old Town, or Bascarsija (pronounced Bashch-kar-shi-ya) from BIRN is about twenty minutes, give or take, so I meander down the river until I reach the end. 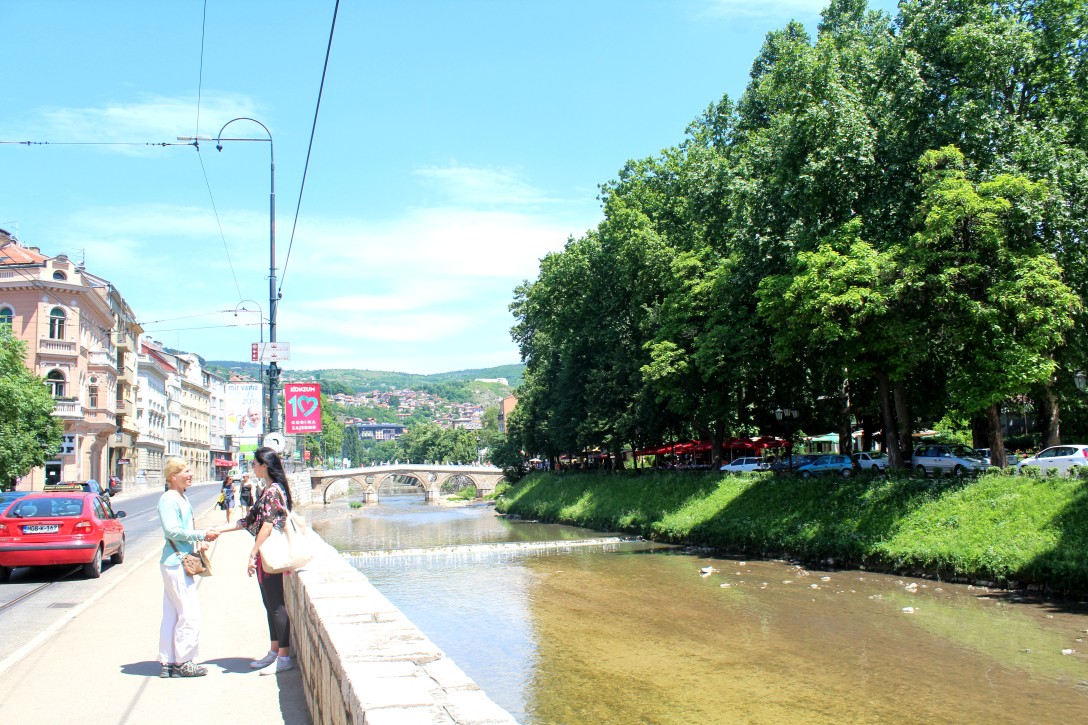 Perfect parking, sir. Right from my own heart.

After lunch on non-brief days, we go to class for our 4:00 classes. Sometimes afterwards we go straight home, or we go out to eat/drink coffee/smoke shisha.

I don’t really know what “Healing Underground Labyrinth” means or is, but this was posted on the outside of a travel agency. I’m tempted to pay to go…

I got cevapi, per usual (it’s delicious) this particular night.

While the others went out afterwards, Merima and I grabbed baklava and headed home.

These buildings intrigue me because though they are a reflection of modernity, they also reflect the sky, at once part of it and separate, and I find that beautiful. I once wrote a short story about a girl who sees the world in a skyscraper and, in an effort to enter that world that she sees, goes into the skyscraper and jumps out of the window, because perhaps it wasn’t really glass at all.

Since Merima and I had shared the baklava with Frank and Arnela, we all went to get coffee at another baklava location to share the beauty with everyone else. 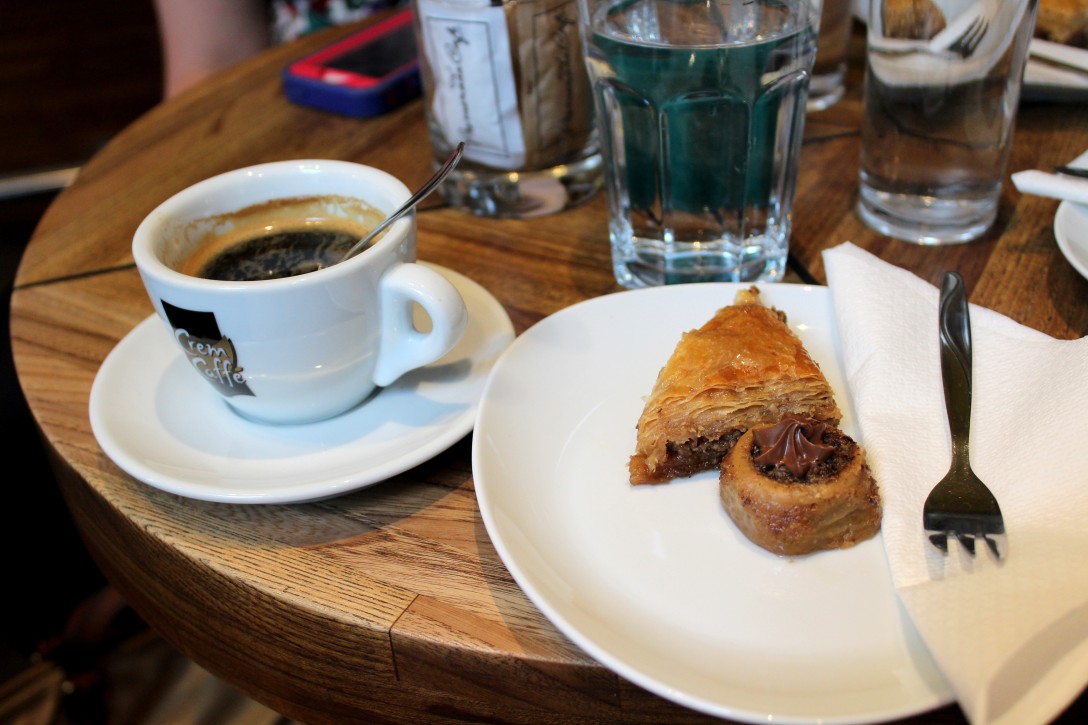 Just look at that Nutella drizzle… 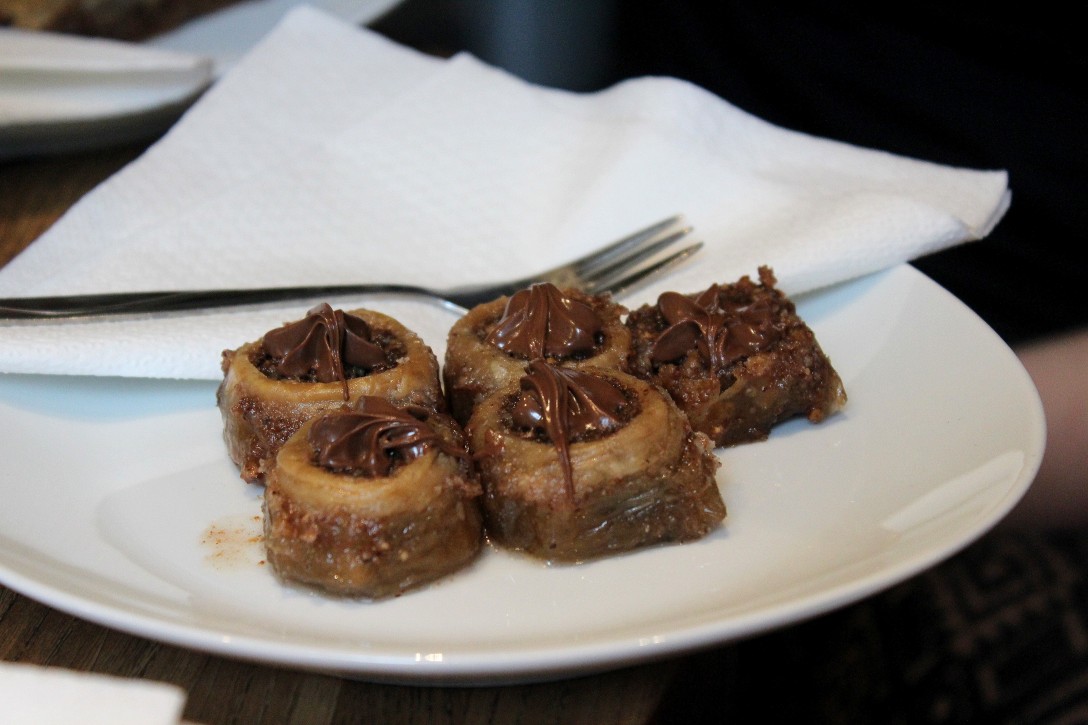 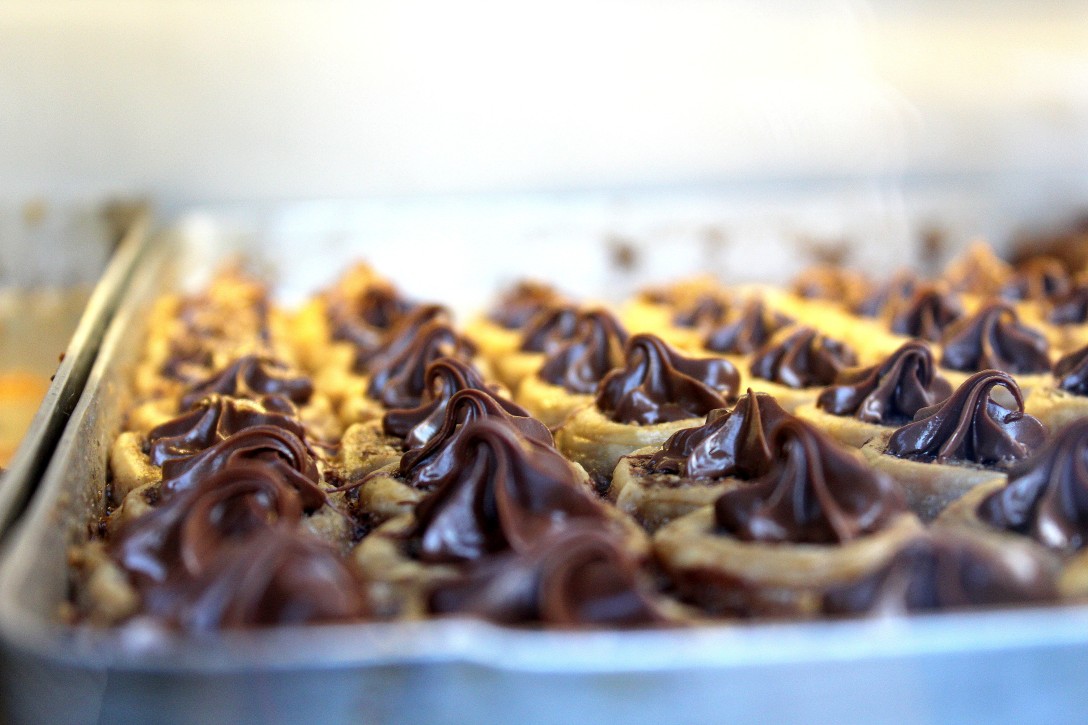 Tuesday night we headed out of Old Town to a “Green Drinks” gathering our professor invited us to. From what I gathered (there wasn’t much information), “Green Drinks Sarajevo” is a young professionals group with an environmentally-friendly mandate.

Either way it was a nice thing to sit and have drinks with your professor and his friends. We met a guy from Wisconsin (they’re everywhere!) who’s here doing photojournalism, I think, and Lily and I had a long conversation with a young architect who has always lived in Sarajevo (except for a year’s stunt working in Germany).

There’s graffiti everywhere here and it’s really a form of art, though this was the first “mixed media” graffiti I’d seen.

Though I don’t desperately miss much from home yet (except fruits and vegetables- who ever thought I’d tire of cheese and bread?), I do miss the lake at twilight, and the river reminded me of that in this image.

Drea, who is from Mexico, met a woman who is doing PhD research on memorials with a focus on the 43 missing Mexican students. (Also her shirt is perfect).

Wednesday, Arnela and I got breakfast across from the school, at a larger, more “American” cafe. 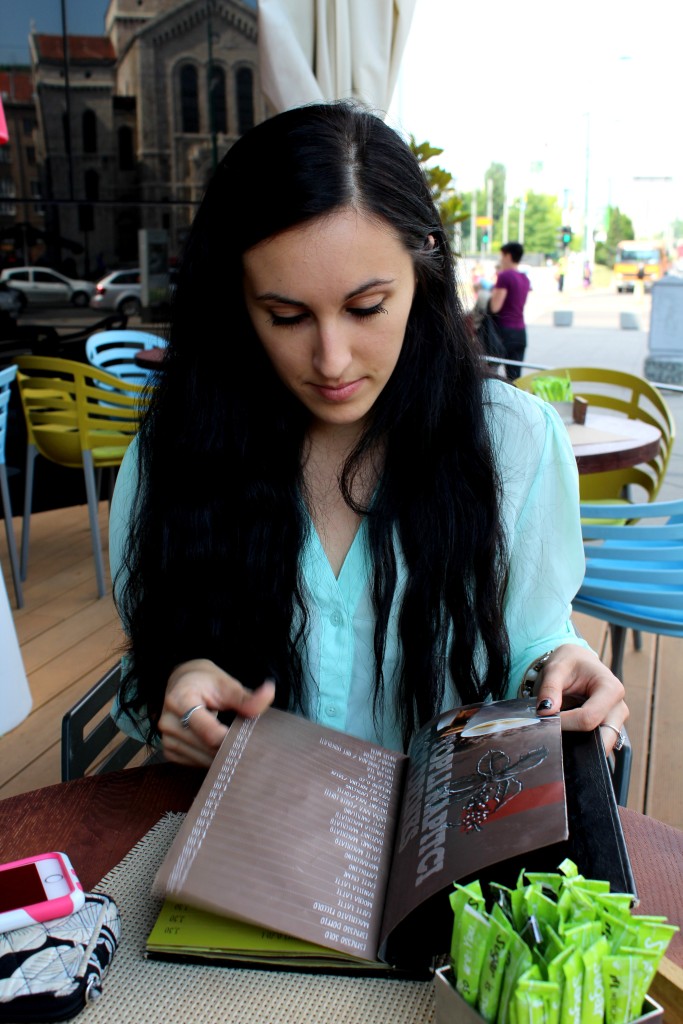 We looked across the patio and saw this: 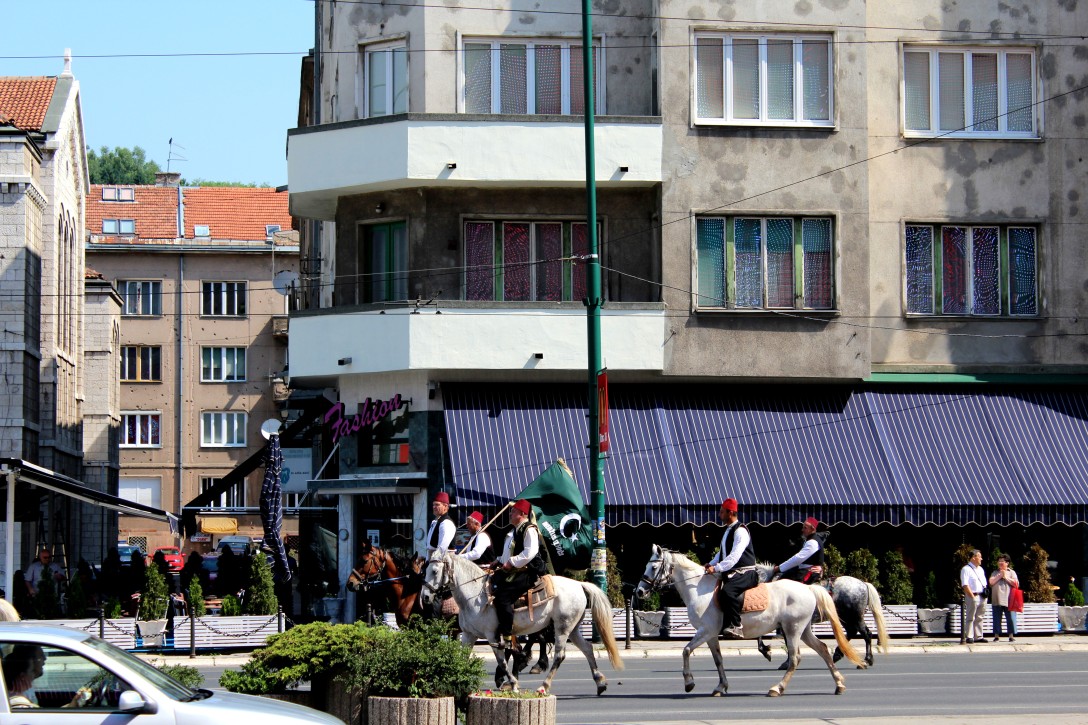 So I stopped a rider and asked what was going on- apparently they’re filming a movie (I’m assuming about the Medieval Ottoman Turks, from the look of the costumes), and for some reason had to ride through the main thoroughfares of Sarajevo.

They have a massive book fair (I’ve saved some of that for later), and it’s interesting to see how they transliterate the names. (Also these two books are two of my favorites).

Though the Little Prince is not terribly popular in the United States, it’s supremely popular here and is sold everywhere. 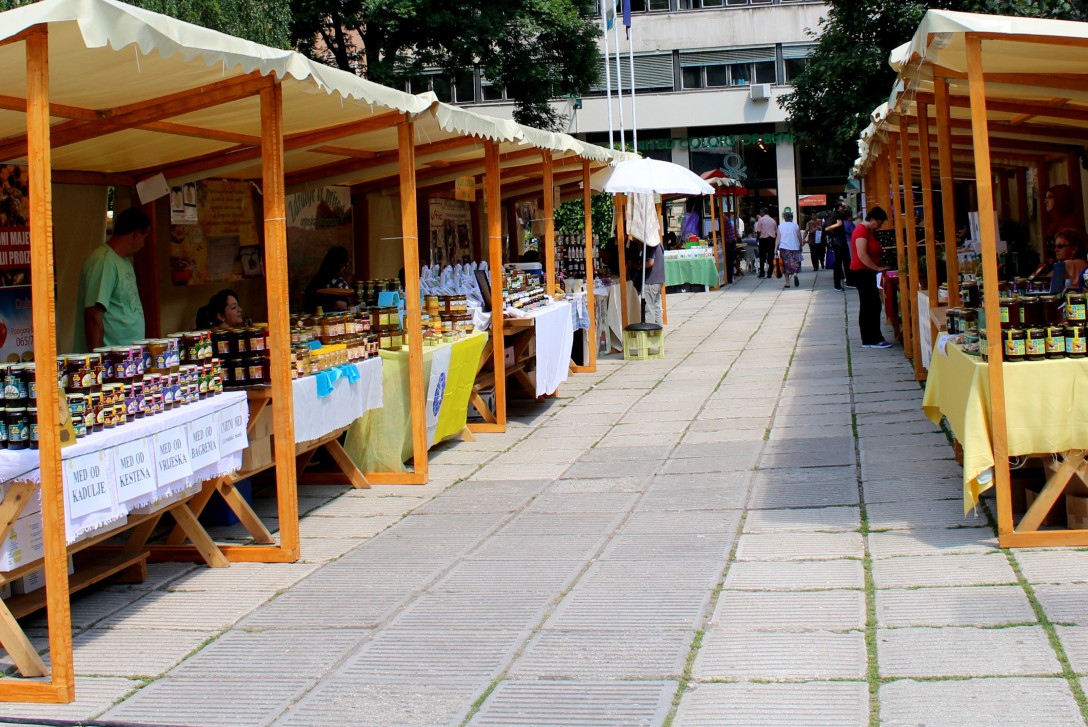 Until tomorrow! (I have a Mary Poppins-themed post that’s quite fun).