*This is what happened yesterday, but posted and written today. I’m still going to write it as if it happened today, though, because that’s just easier and more interesting.*

Remember how I said I was going to the gym? Yeah, I did that. I’m lucky that my host has a membership to a gym, and a nice one at that. You walk in and this huge dude named Ricardo, who functions as the trainer for the place, asks what you want to do. I opted for cardio, because it’s a lot of floor work.

Guys. I did 25 minutes elliptical, 20 minutes bike, 25 minutes treadmill, and 200 SIT UPS. And he watched me count every. single. one.

My abs are killing me.

It hurts to laugh.

Really, to do anything. I don’t even know when I’m hungry because it might as well be the sixth ab on my six pack screaming out in pain.

Anyway, I’m going back next week.

I’ll need a lot of luck. And ibuprofen.

Then I got home, took a shower, ate lunch, and went to meet my team at the Plaza de los Artesanos, from which we walked to our designated foundation.

This is Paola walking through the gardens that function as their facility. They’re supremely small, but they have a pet duck, and the trees are laced with clothing lines drying the resident’s clothes, and dozens of birds hop to and from the trees and plant beds. It’s quiet and cool, something that is hard to find in Ibague, and not all that bad of a place to live out your last years.

The man below can’t speak, but that doesn’t stop him from holding your hand, leading you around the place, and giving you countless kisses.

We played Bingo and Lotteria, games that amuse them and help me with my Spanish numbers and basic nouns. It’s an old game, so excuse the next two pictures, but I found them amusing and will leave them here for your entertainment.

There are approximately eight senior citizens at the foundation, and here are two more: 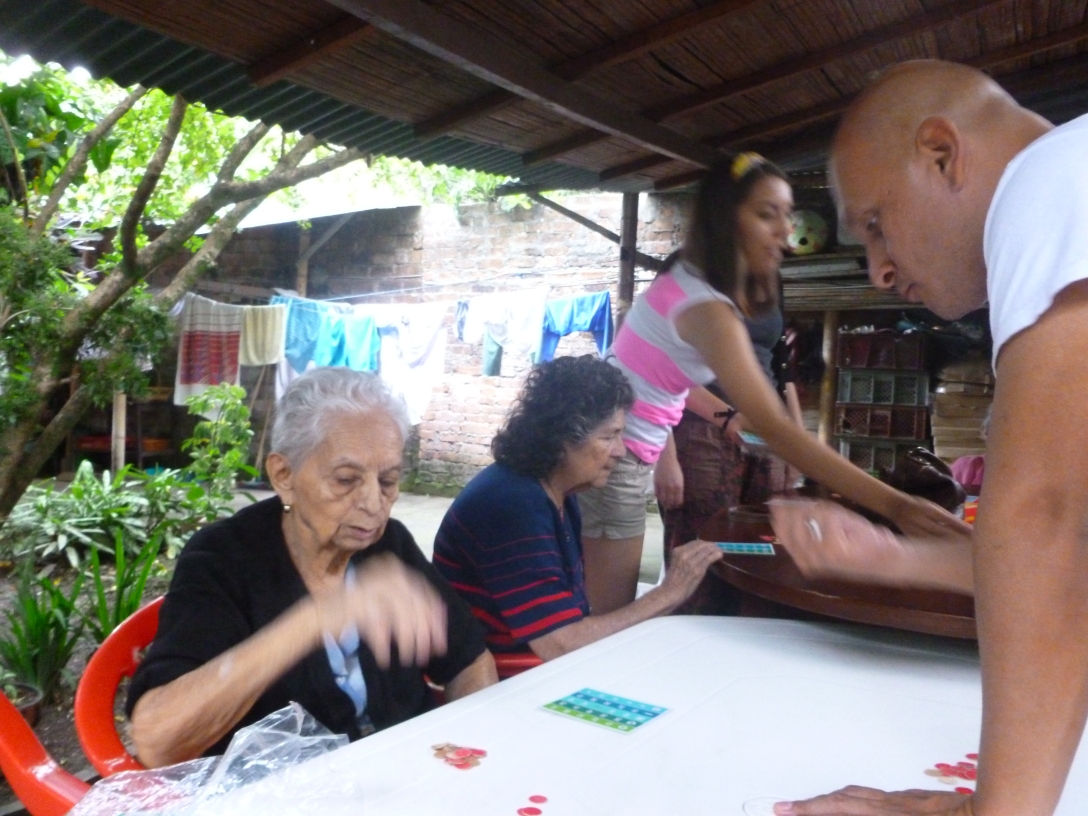 This is me and Ricardo, the man helps at the center. He’s super awesome and tries to learn English, which is great for me. 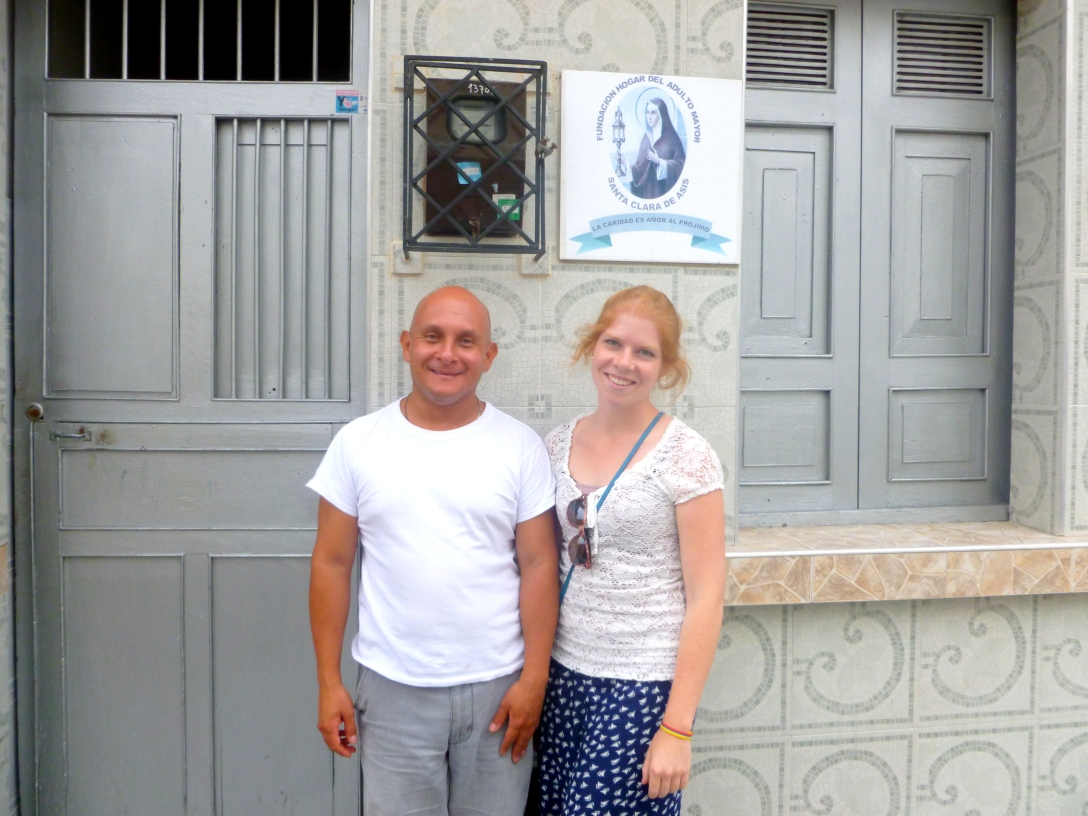 Afterwards, I met Beatrice (Italy) and Jayke (Missouri) to walk around town before heading to the supermarket to meet the others and take taxis to a bonfire for the AIESEC group. I tried empanadas con carne y pollo (empanadas with pork and chicken) and that was delicious.

We also found a book store, and I was the happiest ever because this is honestly the first place (besides my Kindle) that I’ve seen more than five books together in one place. My heart was happy, even if I couldn’t read them. 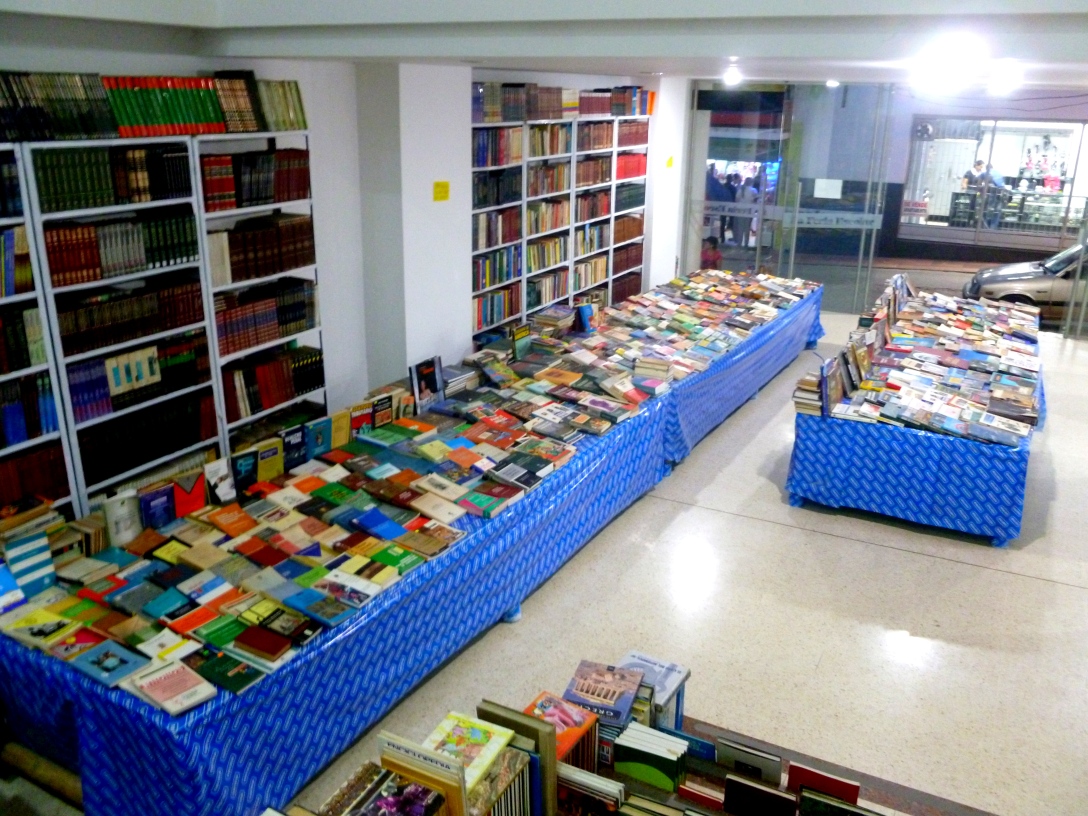 Then we got hungry again, so we stopped in a place with fried chicken and fries. I THINK fried chicken is pollo frito, but don’t quote me on that. Anyway, you eat the chicken with plastic gloves on so you don’t get your hands greasy. Ingenious idea. (Though my hands felt like a terrarium).

One thing I’ve found about young adults everywhere is that they all like to party. So, off to the supermarket we went to acquire alcohol and food for the bonfire. We decided to buy stuff for s’mores, because we were the minority in knowing exactly how heavenly a s’more is. The selection of fruit was so amazing, and it was all so very cheap! One guanabana, shown below, is the equivalent of 75 cents.

We had trouble starting the fire:

But then s’more production was a go. 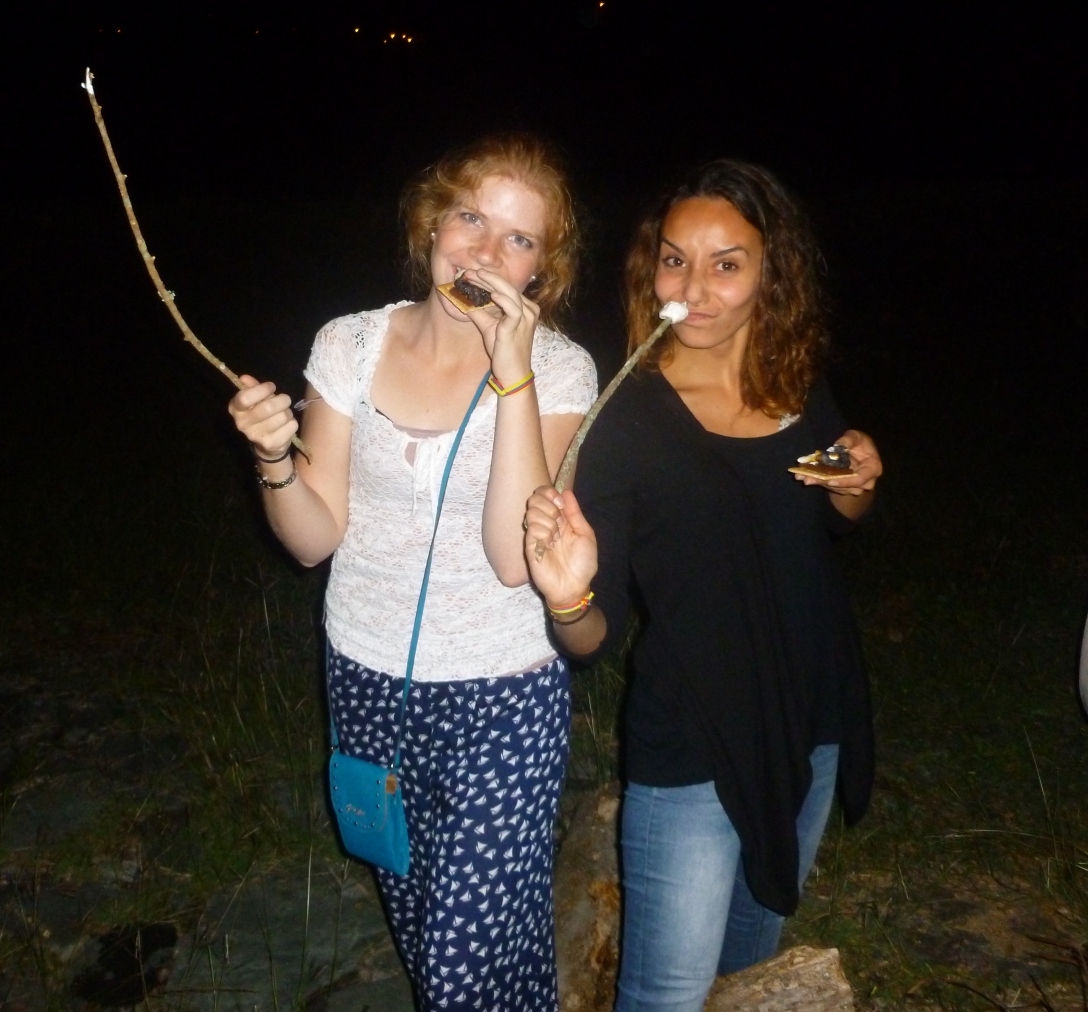 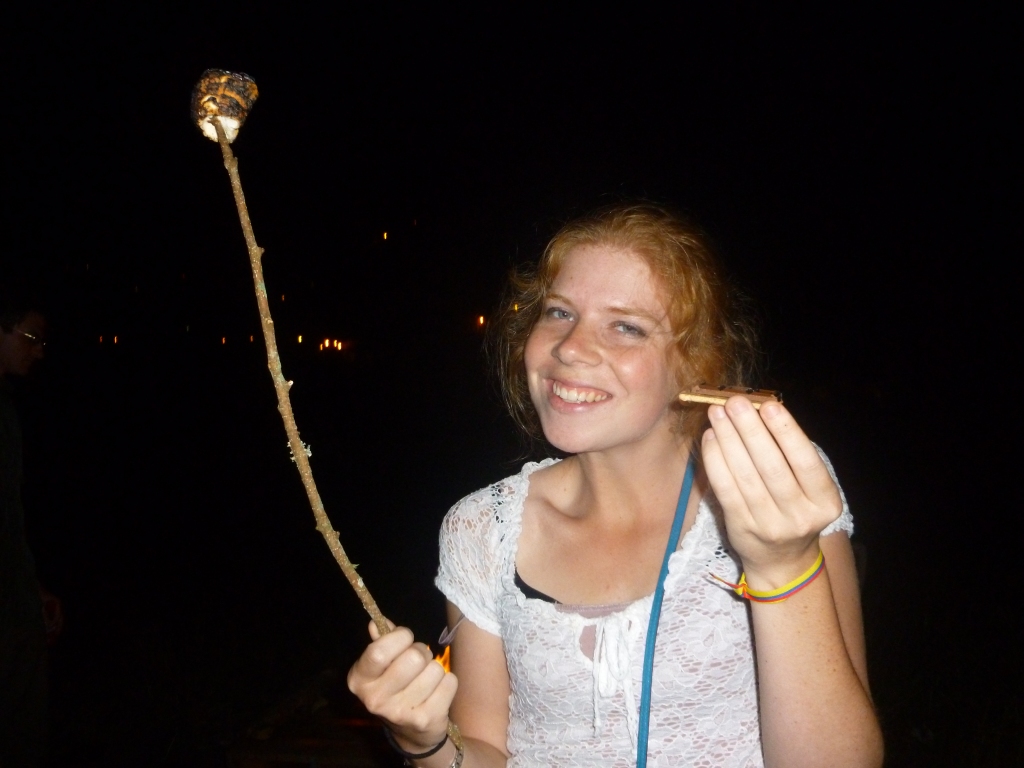 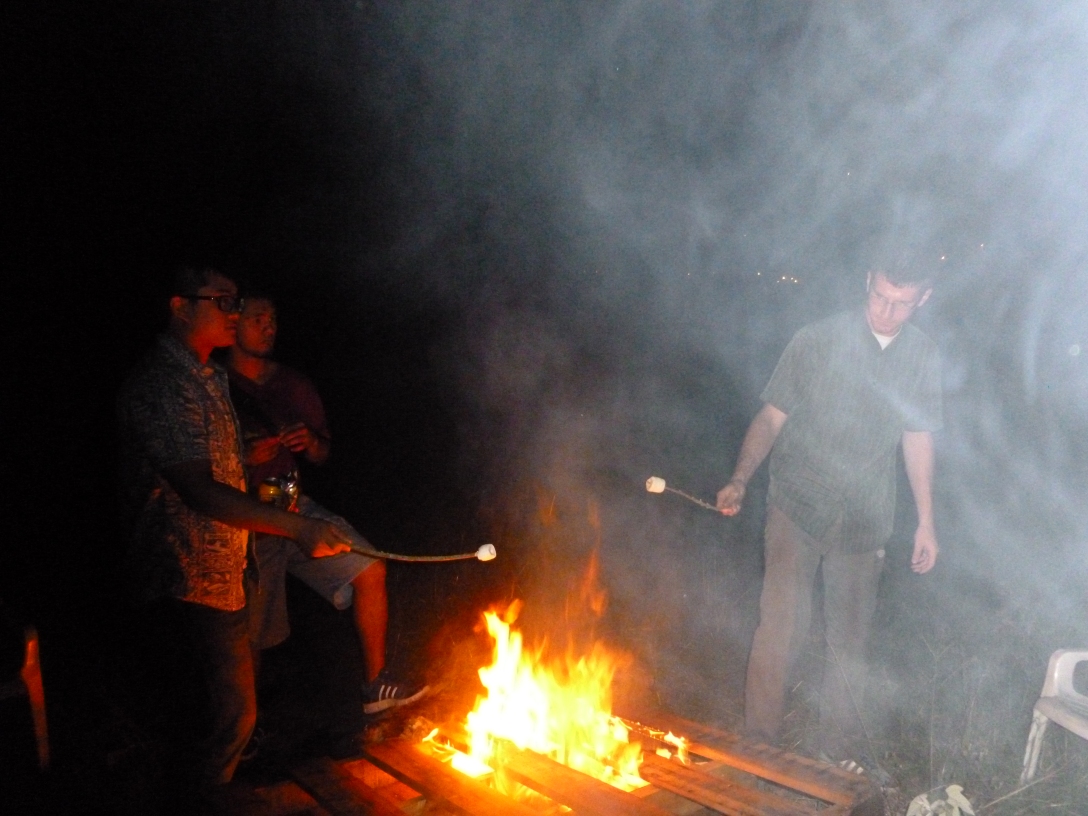 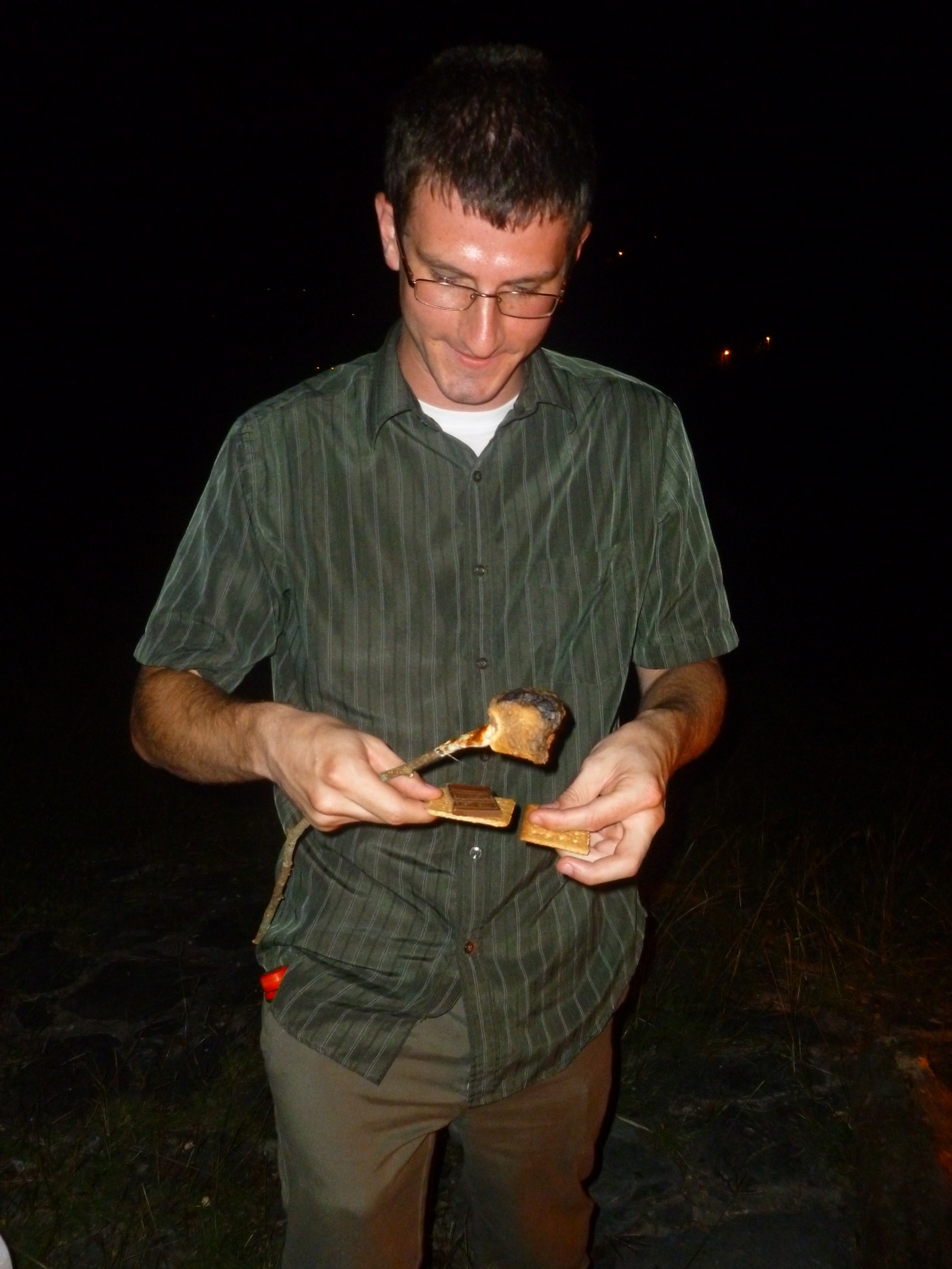 Nobody had had them before, so s’mores paired with aguardiente and beer resulted in all three packages of marshmallows, graham crackers, and Hershey’s milk chocolate disappearing quite quickly.

One thought on “Miercoles… en Nueves!”