Yesterday we had the Arts and Environment Festival that had been planned by the Festival Team for five weeks. Every country represented had a table decorated with symbols of their country and food that was typical of their home. We also had a table where the arts and crafts that our foundations (ninos and abuelitos) had made were displayed for everyone to see.

The plaza where we held the festival looked like a Colombian version of that scene from Mary Poppins with the song, “Feed the Birds.” If you run through the pigeons at full force they scatter and fly around you and look like pigeon confetti. (I don’t have a picture of me doing that, sadly, though it occurred quite a few times). 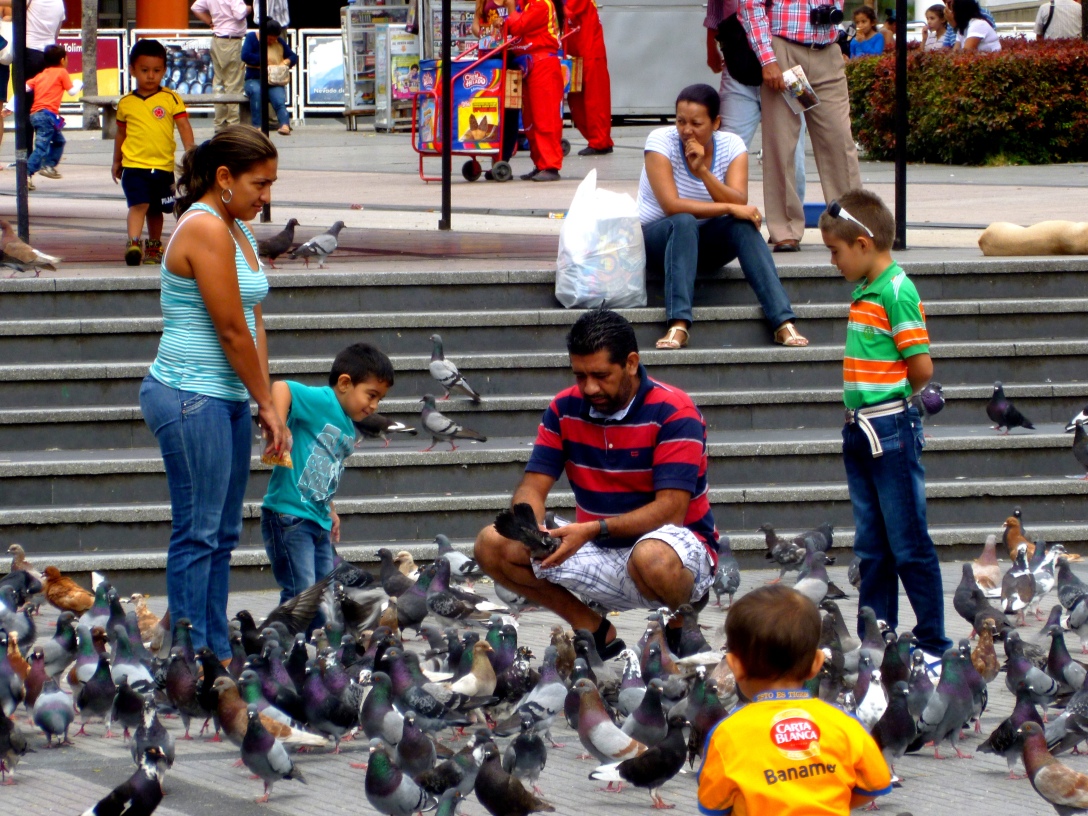 One of the foundations- the one that Bea and Eitan work at- replicated Simon Bolivar Plaza in cardboard boxes. They had little avocado and mango sellers on the streets, buses, trees, the church, and even little Simon Bolivar himself! It was all quite adorable.

Here you see Simon. (I highly recommend reading Gabriel Garcia Marquez’s The General and His Labyrinth).

At our tent, the food was a hit, but so was taking pictures with the American flag! I started the day off with a blue-and-white dress and a flag bandanna. It’s uncommon to see people from around the world here, and with my hair, they always ask to take pictures, if they don’t just stare. (Kimi and I together get the best looks). 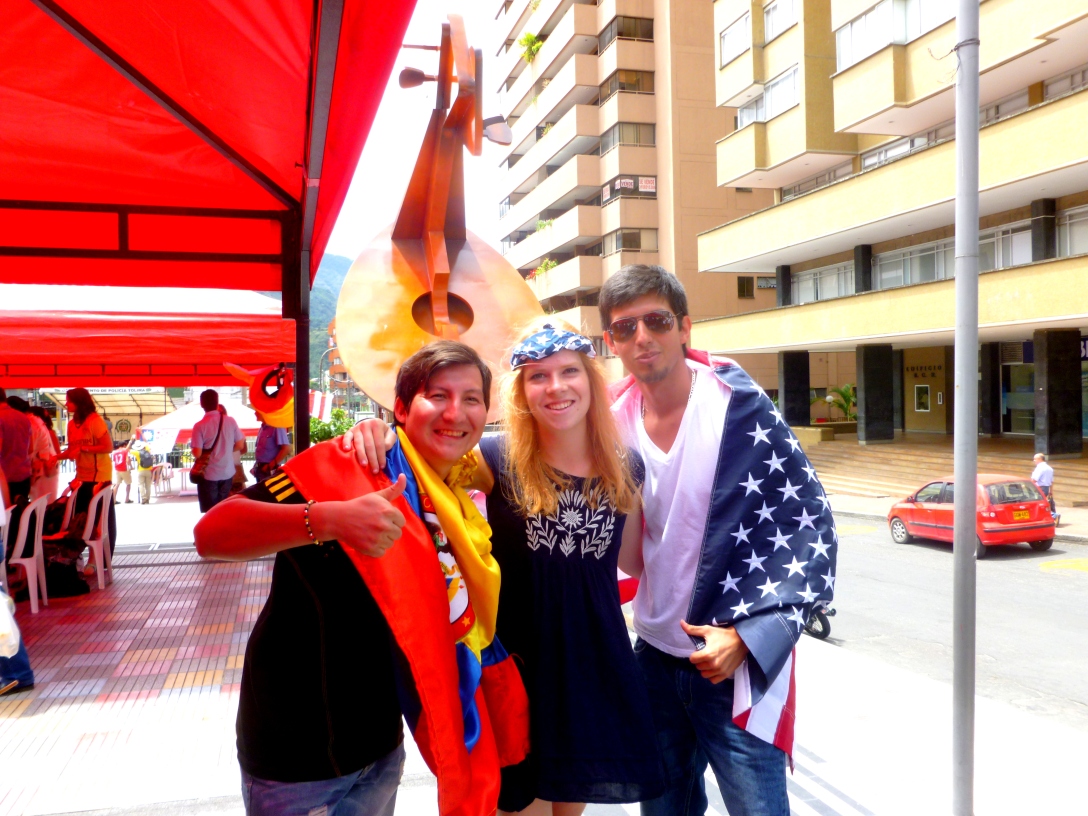 Alirio came for a visit!

These are the children from Laura’s foundation. 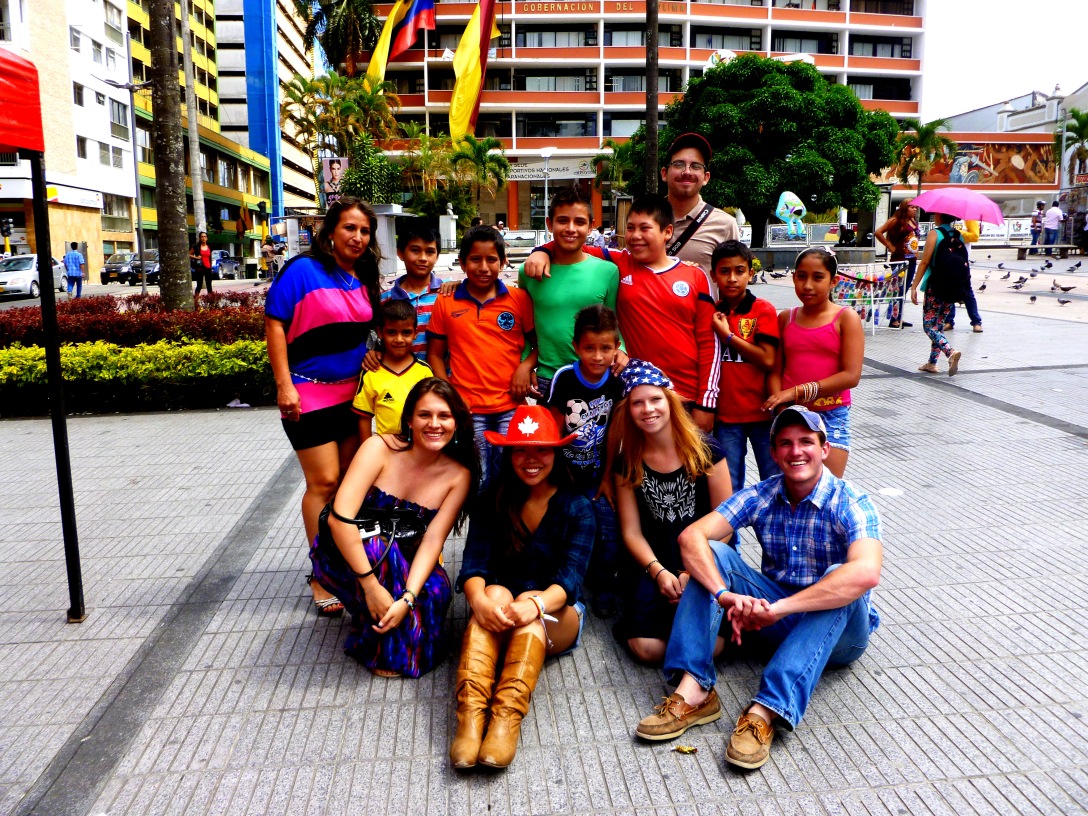 Kimi and I in our original costumes.

But then I found a Batman mask. And Batman of course needs a cape.

This is Cristian, our leader, and a wonderful person. (This picture is modeled after the now-famous picture with my best friend, Justin, but nothing will ever beat that one).

This is Carlos. He promised to show me more libraries, but I leave too soon to see them. He has plans to come see Ryan, Flynn, Lucy, and myself in North Carolina, though, so it’s not goodbye. 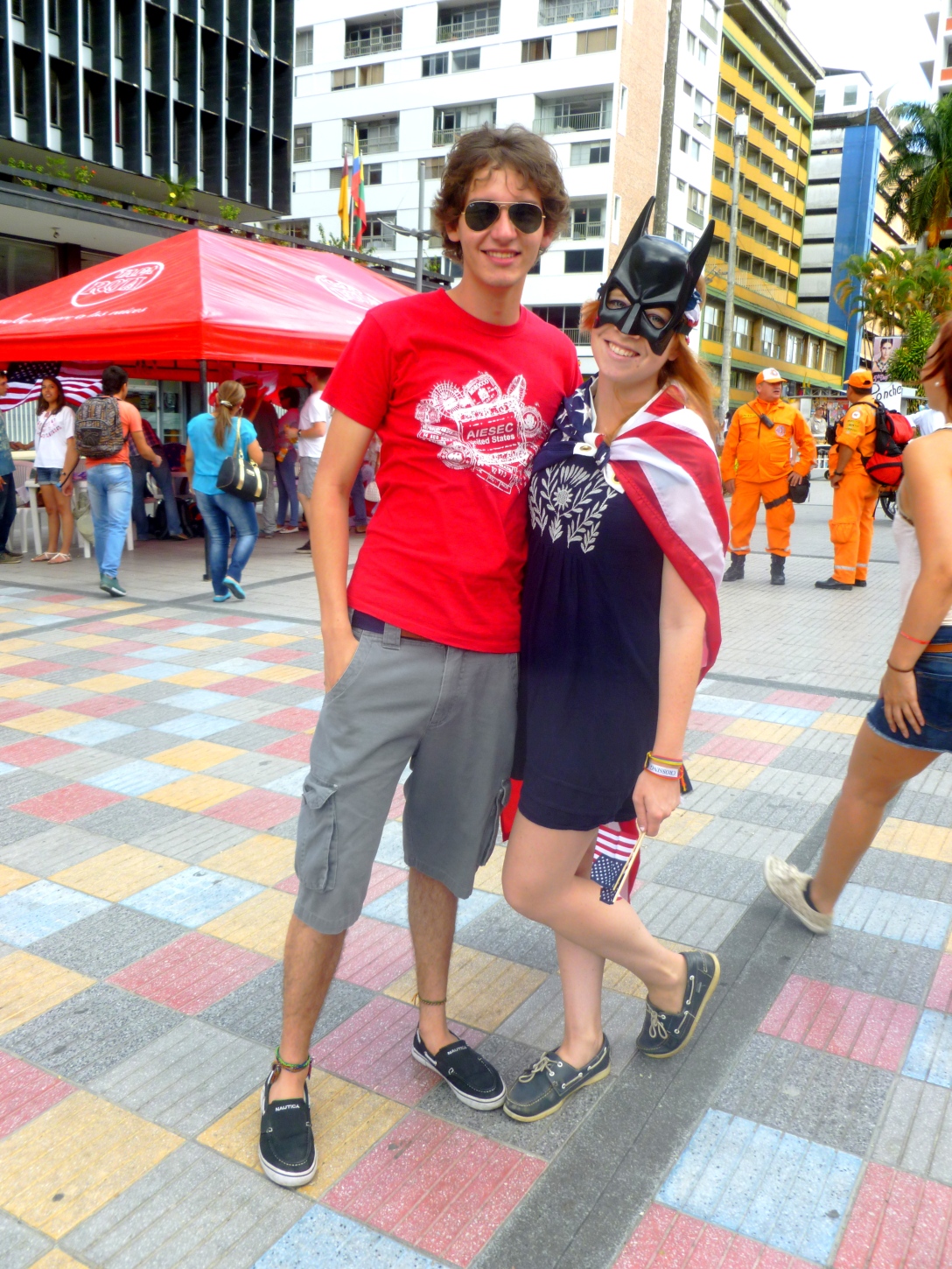 This is Ying from Malaysia.

This is Ying and Caro (Mexico).

Colombian reggae! I wish I understood more Spanish, because I’m sure the lyrics were wonderful. One song was called “Fire Babylon.”

They also had one or two local artists here. I fell in love with this painting- a mix of artistic oils and actual cooking oil- and I just imagined it hanging in my lavender library one day. Look closely and you’ll see hidden surprises.

This one was pure crayon.

The China/Hong Kong table did calligraphy for everyone. 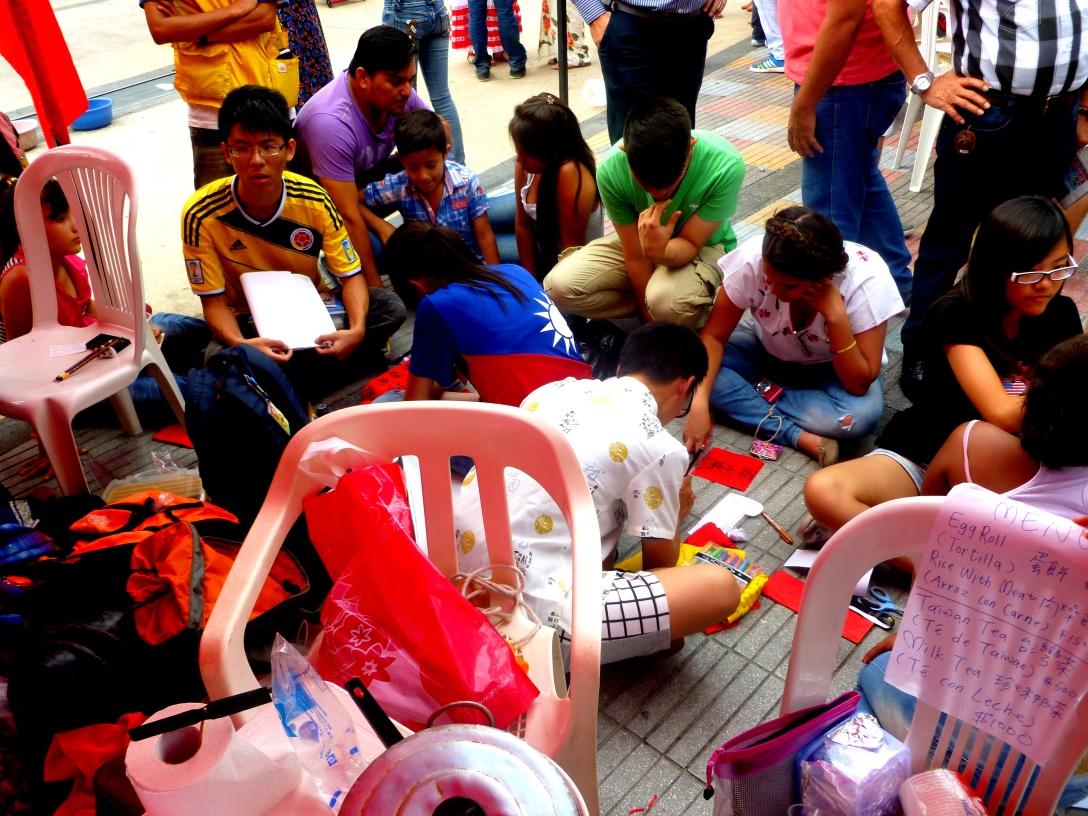 Carlos counted every. single. link. of this slinky for this girl who had never seen a slinky before. 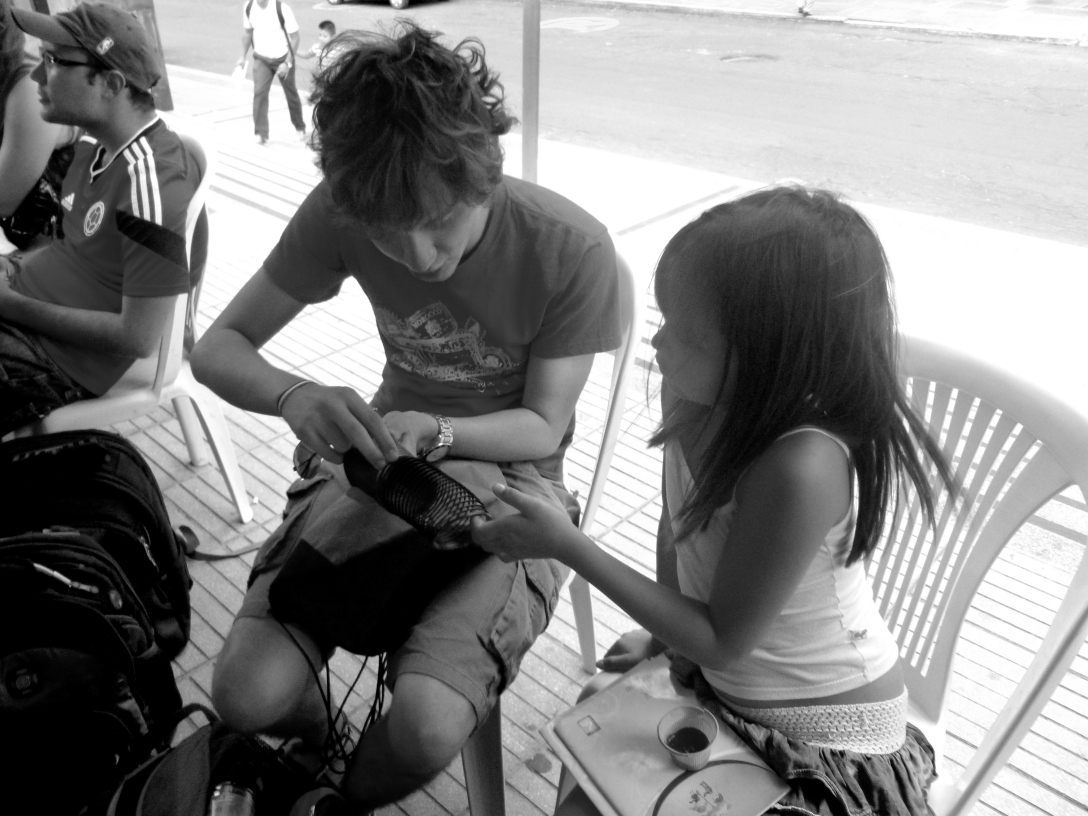 This is Ricci from Hong Kong. He is the smiley-ist person I have ever known.

He just picked up one of these pigeons and walked around with it. It wouldn’t let me hold it, though, I tried.

Before Batman, Flynn and I pretended we were Canadian, eh?

At the end of the day (we left at 8:00 pm), I had had at least 100 pictures with random Colombians and their families. One mom asked me to take a picture with her newborn child… so one little corner of the world, I’ll forever be fondly known as “That Gringa Batman.”

We also, interestingly enough, met a group of young adults from the USA- in various levels of “I’ve graduated undergrad or grad and haven’t been or have left the workforce”- who were here to teach English in a USA-government-sponsored program. They’re here until at least December. We also met a man from Kannapolis, NC, who had happened to marry a woman from Ibague, and they were here visiting her family.

The world is full of crazyrandomhappenstances, it would seem.

Here, also, are two pictures Valters (Latvia) took on his ever-present Go-Pro. One is from Lake Prado, and one is from horseback riding the other day. They’re awesome because he can track the Go-Pro’s movement and pictures on his I-phone, so you always get a good photo.

Today I go to watch the finals of the World Cup (I kind of want Germany to win, even though Argentina’s a Latin American country), and then we leave for the beach. There won’t be updates until I get back, but when I do I’ll post a few posts from the trip. And then I head home!