The day after the football game started out with our designated Bosnian Second Breakfast of gelato. This kind, which I don’t know the name of, was hazelnut or vanilla laced with a thick, creamy, chocolate hazelnut sauce that was to-die-for.

We also were approached by women handing out white strips of fabric to tie around our arms in remembrance of the genocides and human rights abuses at Prijedor, which was the location of three concentration camps (Omarska, Keraterm, and Trnpolje). After the Serb forces took over the Prijedor area (pronounced pree-yeh-dohr) the inhabitants of the area were told to wear white bands around their arms if they were loyal to the new authorities- inevitably, the majority of the population (and all that stayed safely) wore white bands, adults and children alike.

I’ll explain the Dayton Accords in more detail later, but you can see anti-Dayton sentiment at these memorials.

On our way to lunch in Old Town, stopped to take a sip of water from this fountain. It’s said that if you drink from this fountain, you will return to Sarajevo before you die. We were also really parched (In this case, parch has determined our destiny).

(Ignore the weird knee-thing going on, that’s the bum one 😉 )

Here, there are cafe shops that sell only coffee and drinks, and restaurants that actually sell real food. We stopped at this one and had Turkish/Bosnian coffee. The coffee you’ve seen previously is either a macchiatto, a cappuccino, or a shot of strong espresso with sugar that I add. 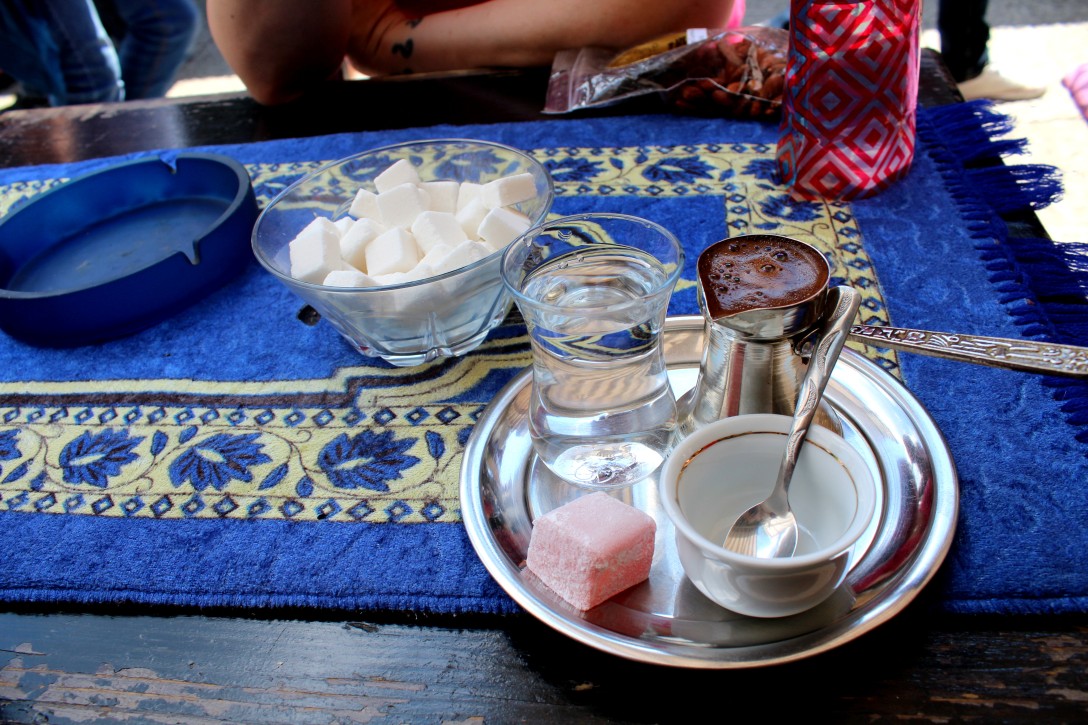 For this coffee, you’re supposed to pour the coffee into the cup and bite sugar cubes as you sip it during conversation, but that’s still awkward for me so I just put a sugar cube in the cup and let the hot coffee melt it as it’s poured. The pink square is a rose-flavoured Turkish Delight, something I actually quite enjoy.

For coffee like this in Charlotte, go to Euro Cafe and Grill on Central Avenue. Bosniak-owned, it’s also attached to a small Bosnian Market. (There’s another cafe in Charlotte that’s Serbian-owned, but I forgot the name- I’ll let you know when I confirm it’s the correct one). For lunch we had cevapi (prounounced: che-va-pee), which is the sausages you saw from the game served with a thick yogurt sauce sweeter and thicker than tzatziki.

I am so in love with the pattern un-matching here.

We also went to the old library that I talked about earlier. This library was famous for its academic contents and was stunningly beautiful. During the war it was shelled quite heavily and entirely destroyed. In the picture below, you see a cellist standing in the rubble of the library, where nearly 70 percent of the documents it housed were lost entirely. This man, a cellist with the Sarajevan Philharmonic named Vedran Smailovic (prounonced Vedthran Smail-oh-vich) had been standing in a bread line during the Siege of Sarajevo when the line was shelled by the Serbian forces from the hills, killing 22 people and injuring many dozens more. Smailovic, left with nothing else to do, sat in the rubble for 22 days subsequently, constantly playing Albinoni’s Adagio, described by Smailovic as the saddest music he knew (for the saddest music I know, listen to Barber’s Adagio for Strings as recorded by the London Philharmonic in the immediate aftermath of the 9/11 attacks). Known as the Cellist of Sarajevo, Smailovic’s story inspired documentaries and the famous Sarajevo Film Festival, used as an outlet for art and a means of reconciliation through art. It became common for Smailovic to sit in ruined buildings throughout the siege after his bread-line vigil and play his cello.

The European Union financed the reconstruction of the building, though now it serves as the City Hall and not as a library, since the contents were destroyed. The reconstruction finished last year and the result is absolutely stunning and very close to the original, though nothing can bring the original back as it was. 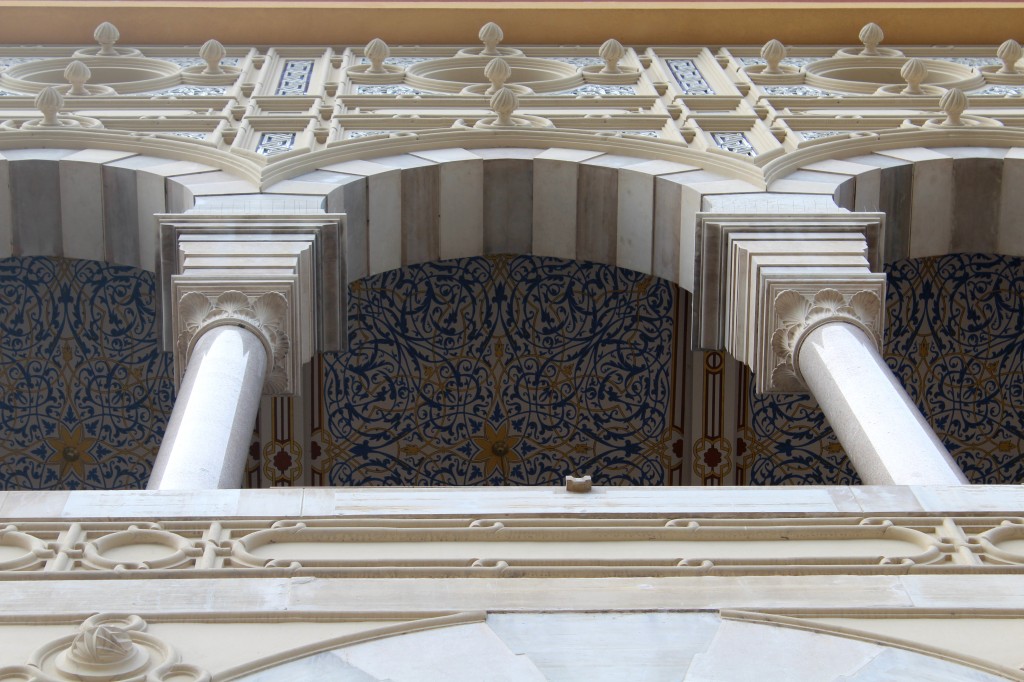 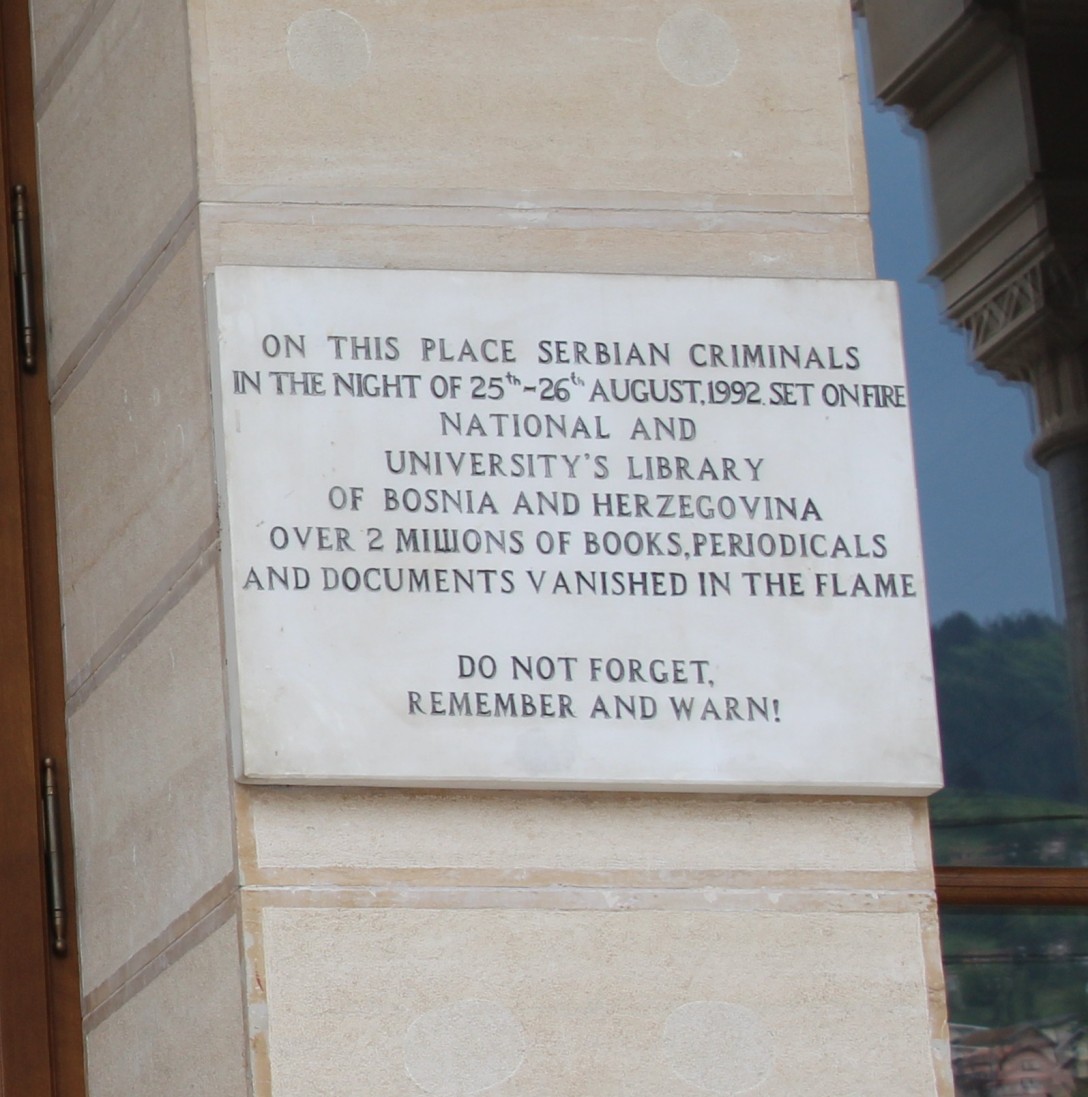 This was particularly important to me because I love libraries and it hurts me when they are destroyed (see my post on the destroyed artifacts in Syria and Islamic State strongholds). Much like the Library of Alexandria, whose destruction is purported to have set the development of civilization back by centuries and augmented the Dark Ages, the destruction of this library is also very painful. 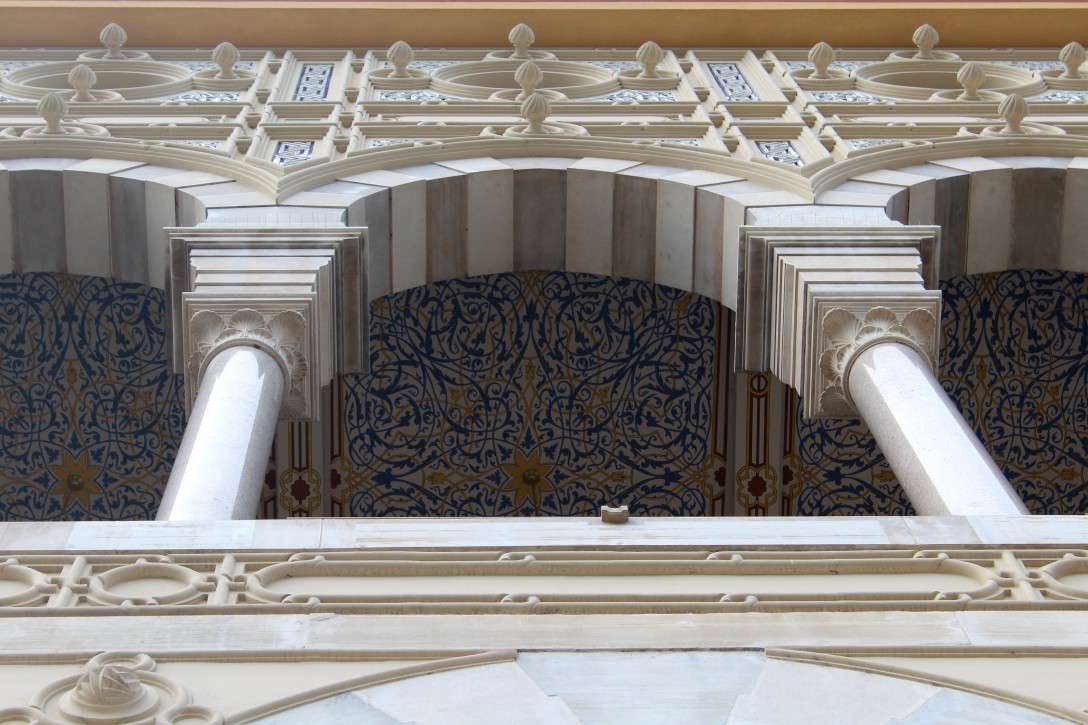 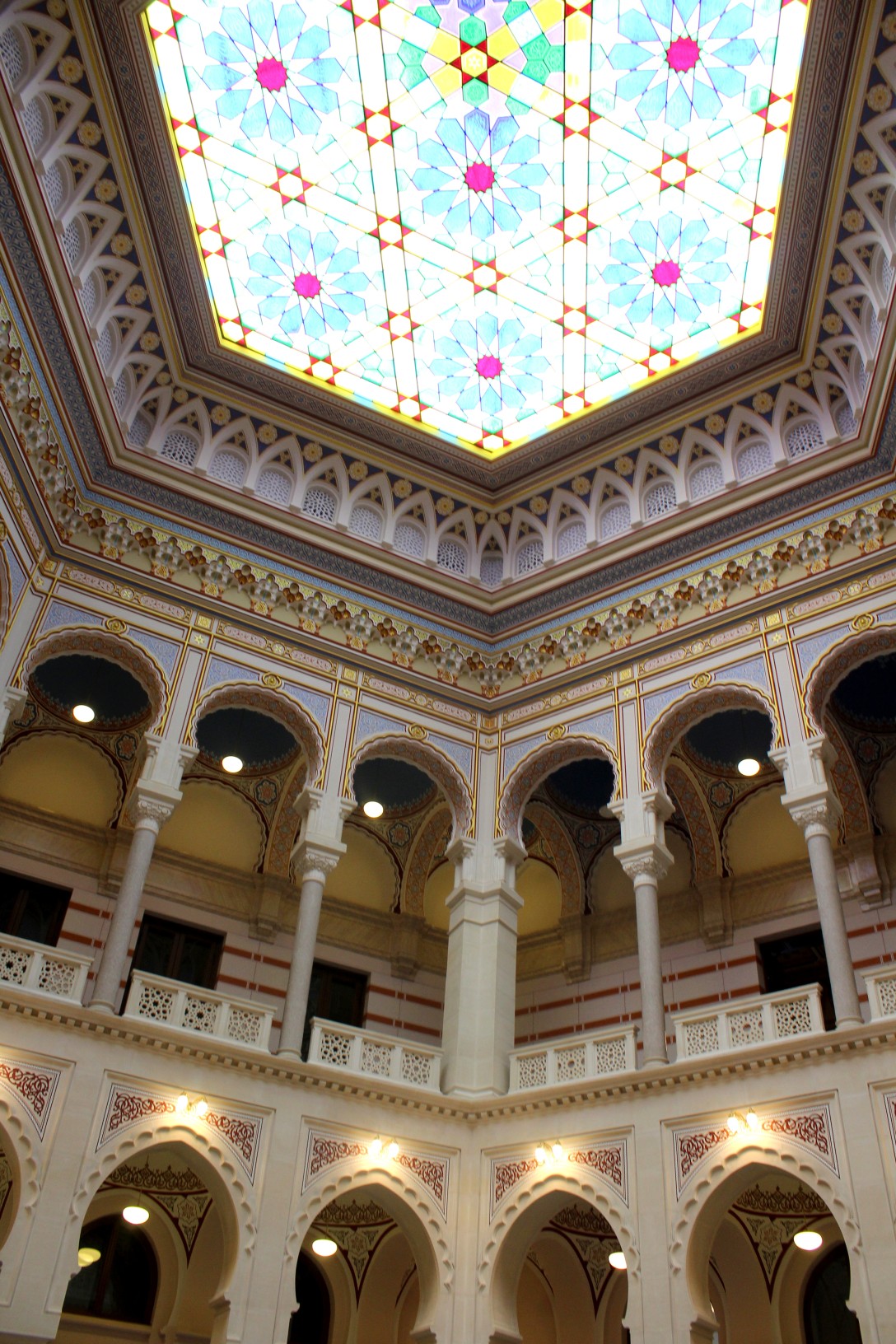 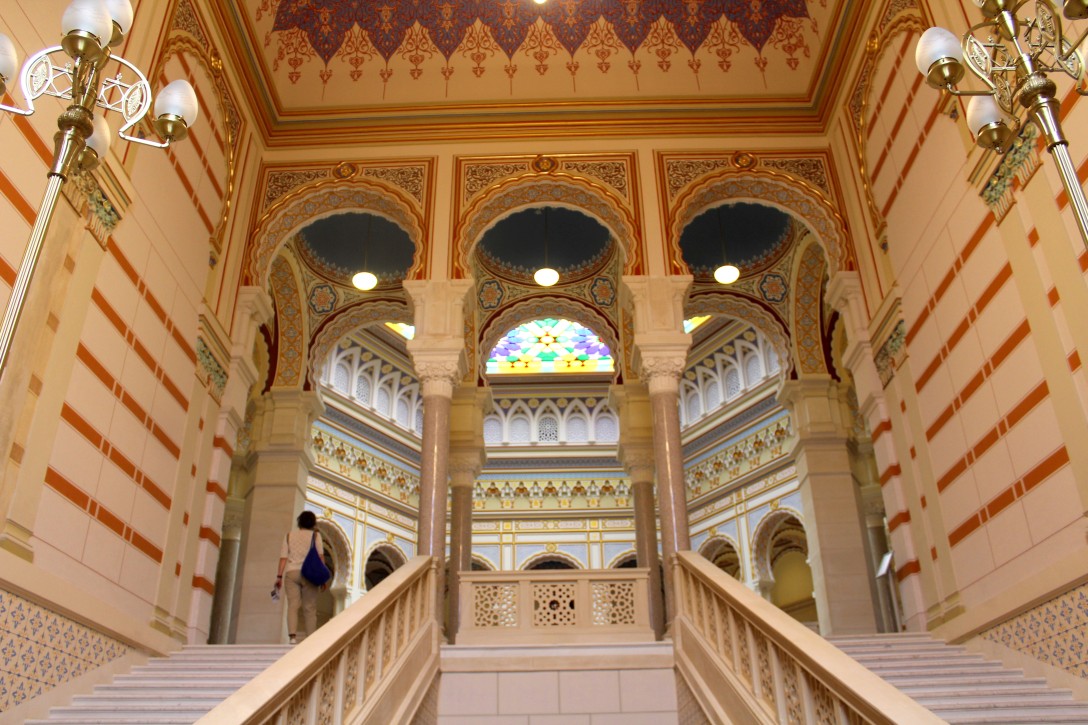 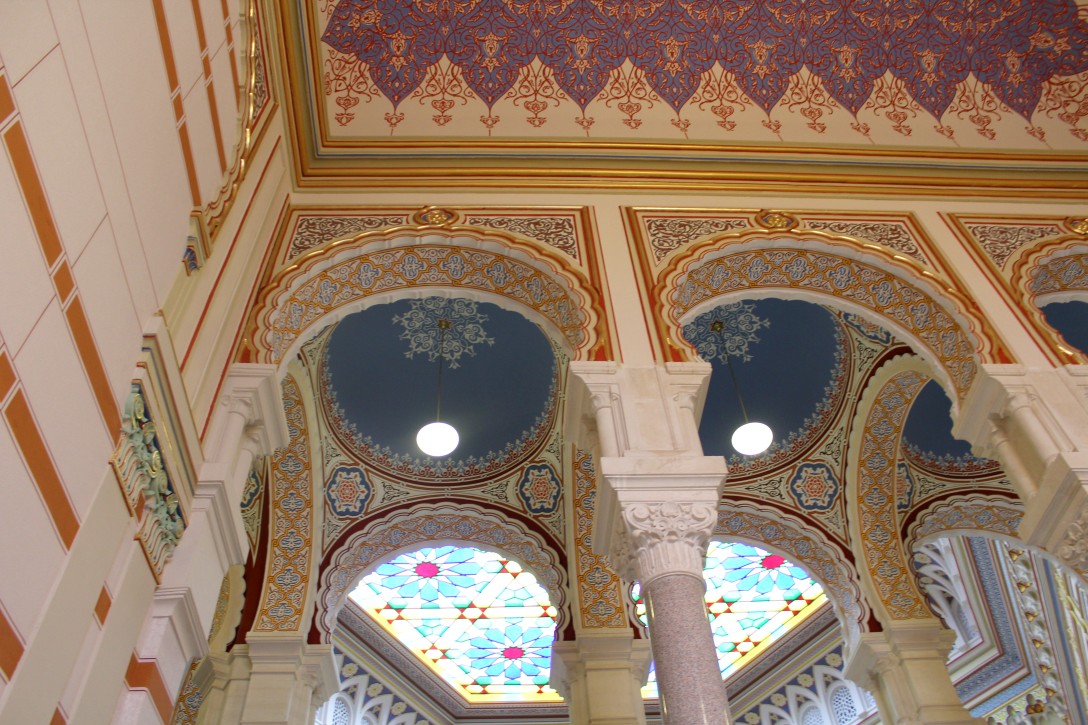 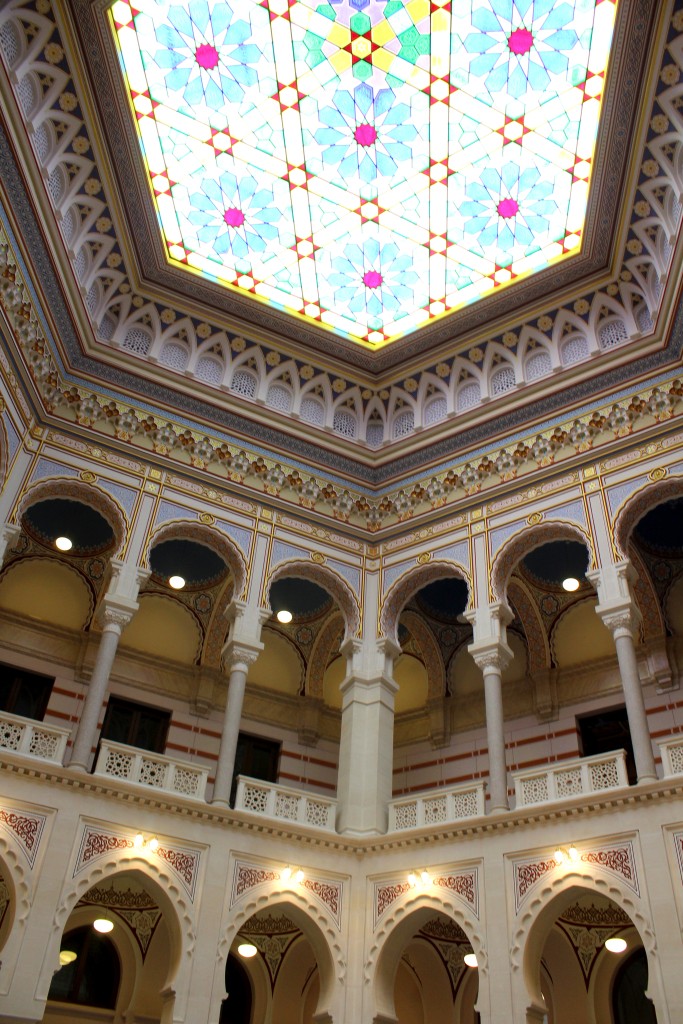 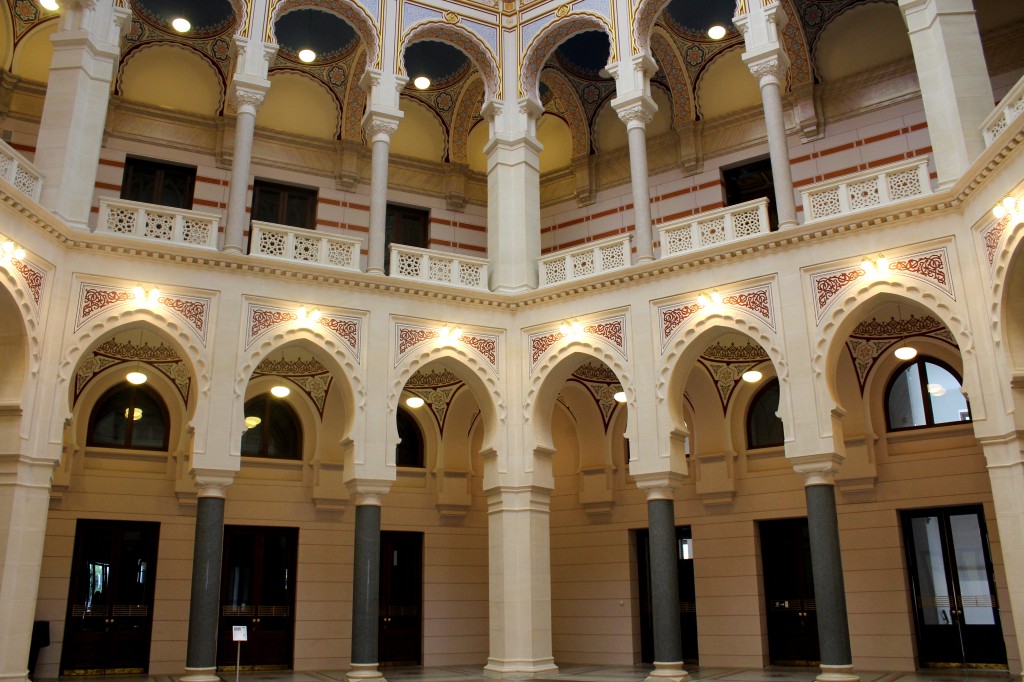 So that was the atrium- a cavernous, open atrium that was at once large but colorful and welcoming, upping my standards of my personal library. Above is Frank, a student from the University of Wisconsin Milwaukee (Maggie, Frank, and I were exploring on this particular outing).

The next room is what used to be the main reading room and looks out across the Miljacka River (the river you’ve seen pictures of). Now, it serves as a grand room and does not house books, though the general painting and architecture mirror what once was there. I imagine all the thoughts I would have while studying in a place so poetically beautiful and am sorry the world has lost all of the beautiful thoughts others more intelligent than I might have had there. 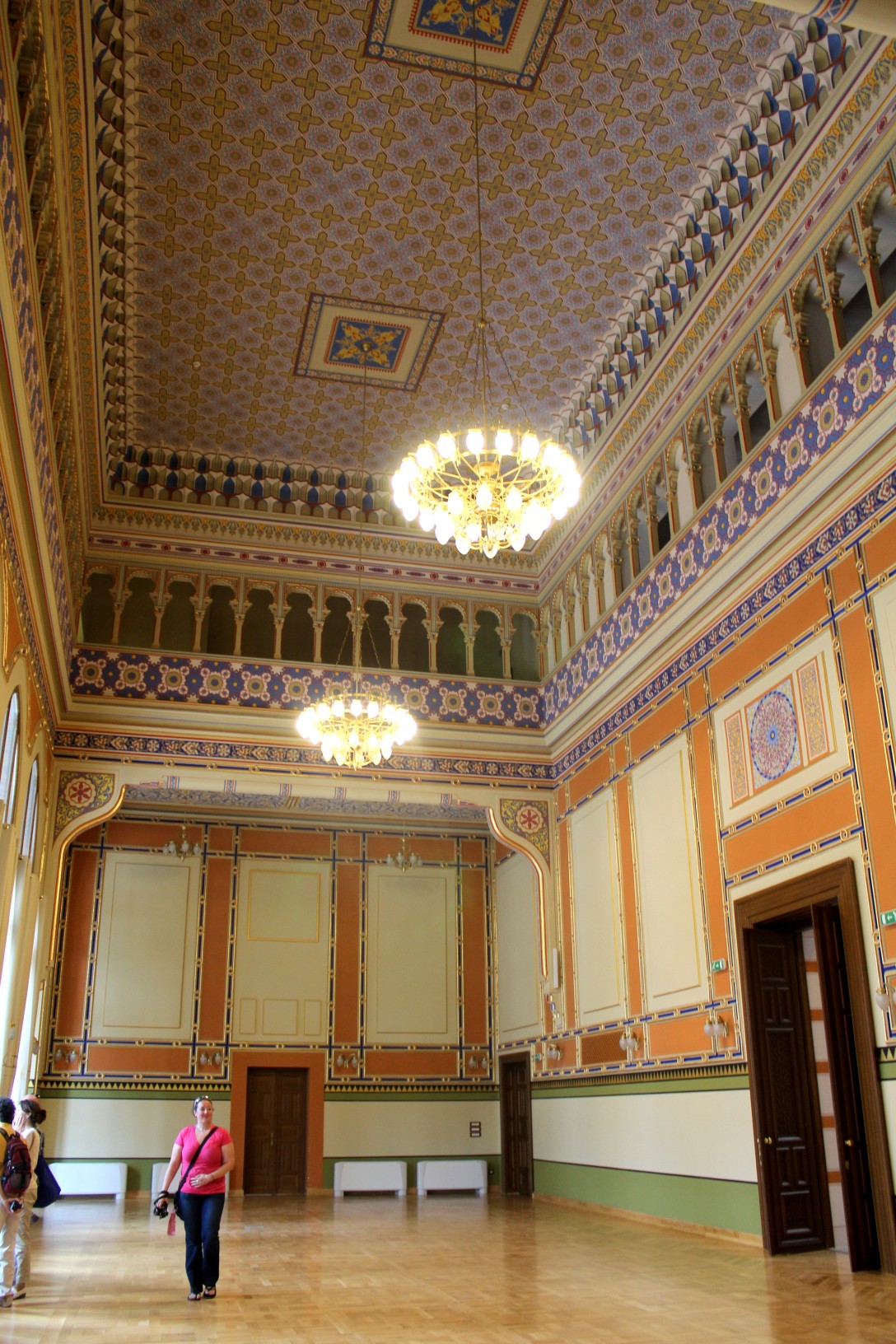 (That’s Maggie but she hates pictures so there will be few of her but she’s still awesome).

In perhaps my favorite part of the day, the light filtering in through the stained-glass window was dancing in rainbows across the purple and eggshell walls, like so many fairies from Oz were waltzing in an old Russian Court ballroom…

The view outside the library: 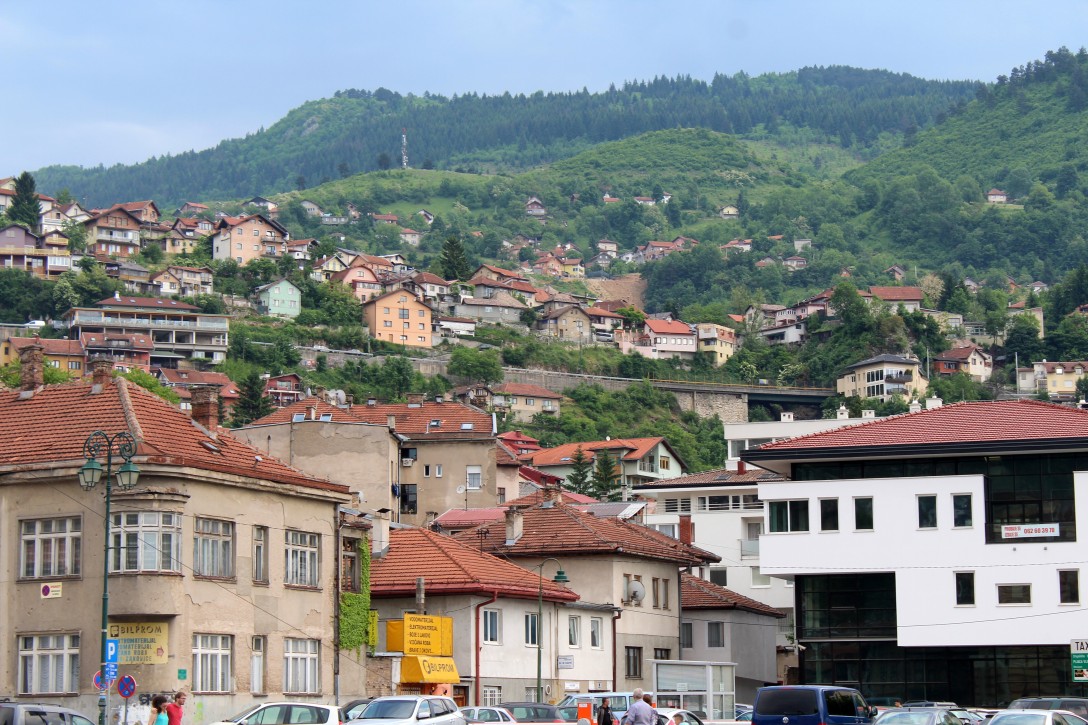 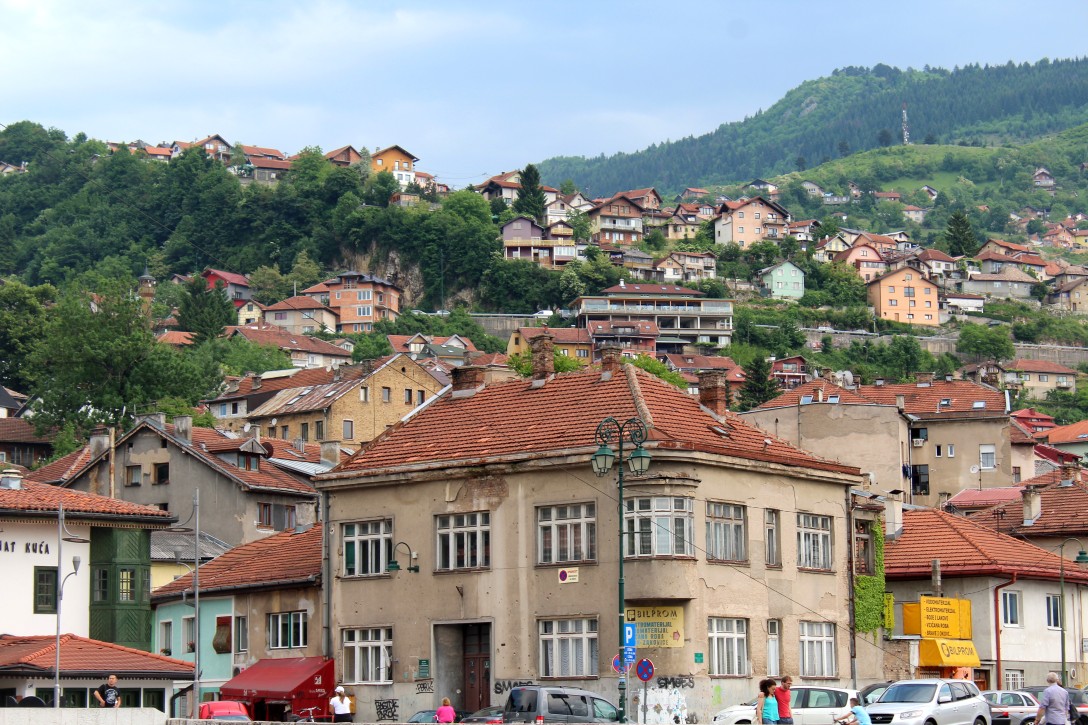 This is a monument to the place where Franz Ferdinand and his wife, Sophie, were assassinated by Gavrilo Princip, ostensibly starting the First World War. It’s smashed by a car accident, however (you can’t have an accident here for smashing into a monument).

And these are among the oldest ruins in the city, remainders of the market of the Old Town where produce had to be sold in the summer, since it didn’t spoil in the sun-repellent stonemasonry.

We ended our self-tour by sitting at a cafe for a few hours. I had a cappuccino and a hot chocolate, though on a scale of Nestle Hot Chocolate with Marshmallows to Italian Dark Drinking Chocolate, this is approximately 75 percent to the latter.

We headed to a beer festival after this but that was quite an adventure in and of itself, and that would be too exciting a blog post for one day 🙂