After about 11 hours total time sitting in the plane, I finally made it to the port city of Hamburg! I hate flying, mostly because I am on the taller side of the average man, and airplanes are not typically made for anyone over the height of your average garden gnome, so I was more than happy to get up and walk through the city.

Unfortunately, I quickly realized that on my way to my apartment, my 50+ pound suitcase did not mix well with the cobble stone that Europeans are so fond of. Every step it would grab the wheels of my suitcase and launch it onto my ankles, which inadvertently caused me to let out a noise that I think sounded similar to “Hey, look at me, the American who doesn’t know you can’t roll your suitcase across cobble stone”.

I managed to make it to my apartment without getting lost (for those of you who have ever entrusted your life to my navigational skills, you know what an accomplishment that is for me) and walked up to my building only to be greeted by a statue out front that I’m almost positive was put there for the soul reason of mocking me and how I felt for the entire plane ride.

After Getting settled in, I was instructed to promptly take the placement test that would determine in which language level I would be studying. During this test, I managed to fall asleep twice and accidentally referred to the obviously female interviewer as “Mr” (Herr, in German) for about 5 minutes before I realized my mistake. Jet lag ist eine Miststück.

After my test, I went back to my apartment and unpacked. I was pleasantly surprised to see that I had pretty much everything, including cooking utensils, already in my cabinets.

After setting up, I promptly fell asleep around 17:00.

I woke up the next morning for my 8:30 class at 8:20 – after 50 minutes of my alarm desperately failing to wake me up, so I had to throw on a beanie and run to class. I managed to get there on time, which is late in Germany, but for me on time is an accomplishment.

When I got there, the placements for classes were posted on the bulletin board out front. Somehow, I managed to charm the interviewer into putting me into the second class, one step up from beginner! Not sure how that happened, but hey, I’ll take it.

After class, the institute rented us a “Stadtrundfahrt” (city tour bus), so I finally got to see the whole city and take some pictures. 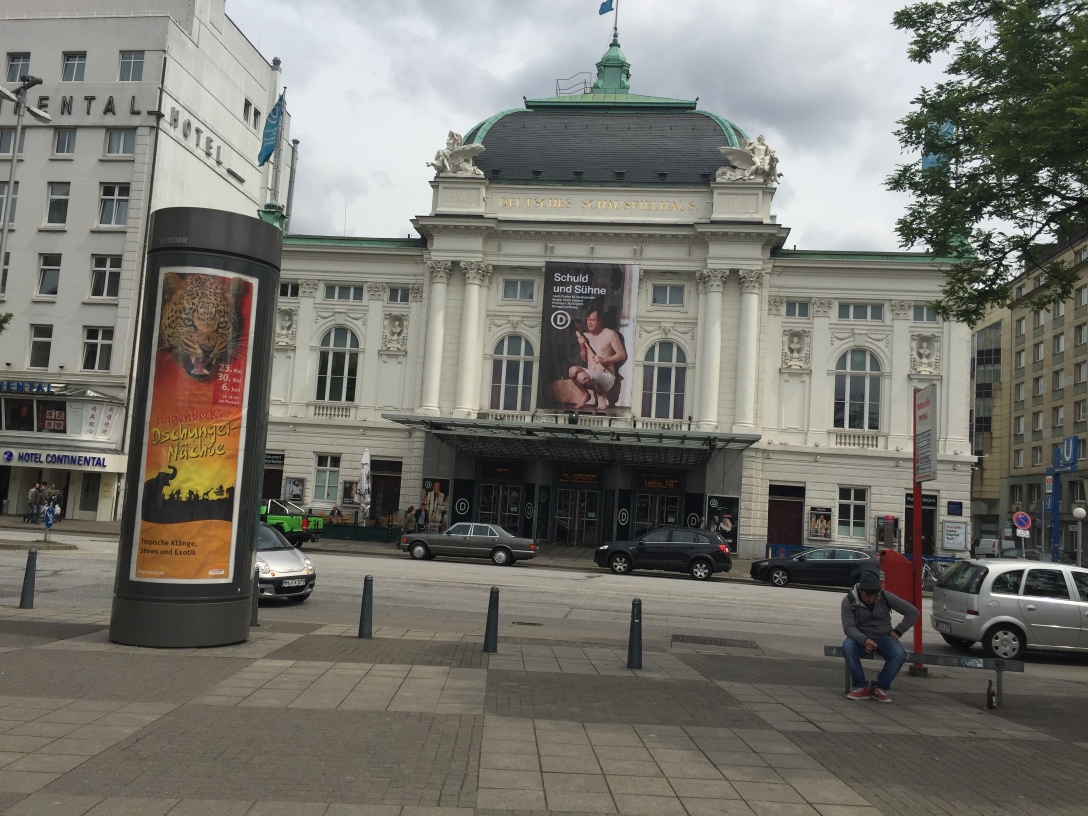 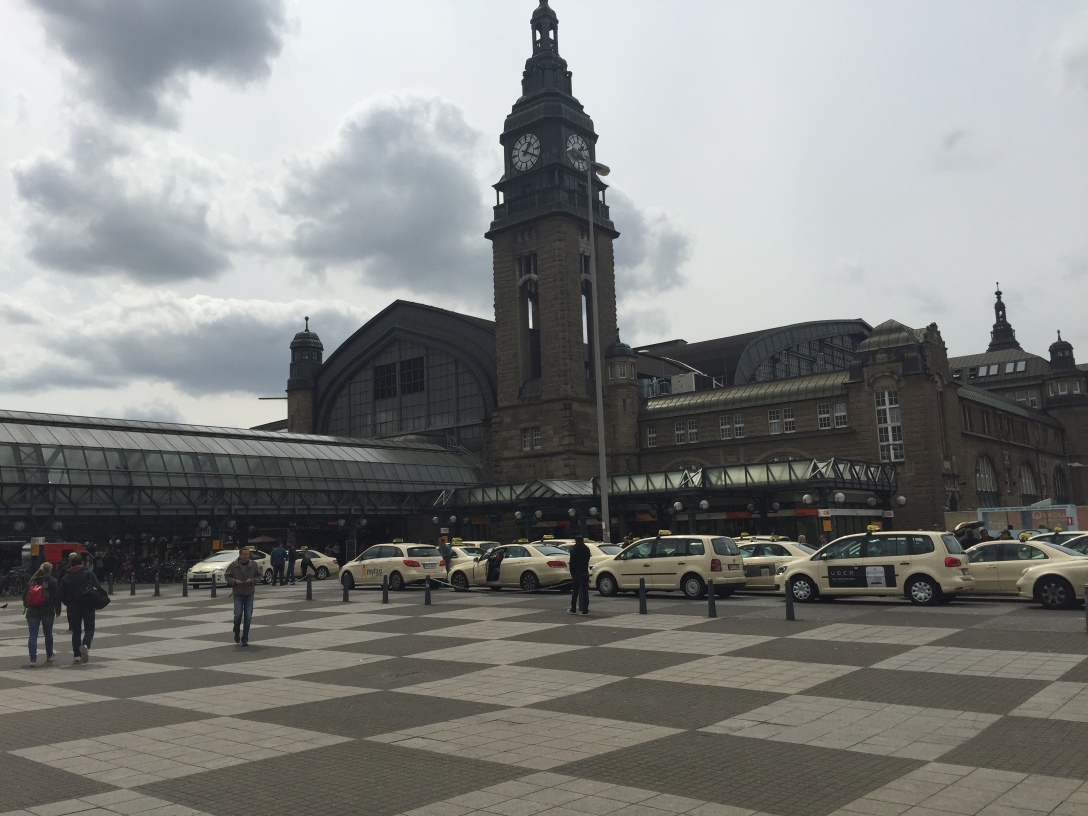 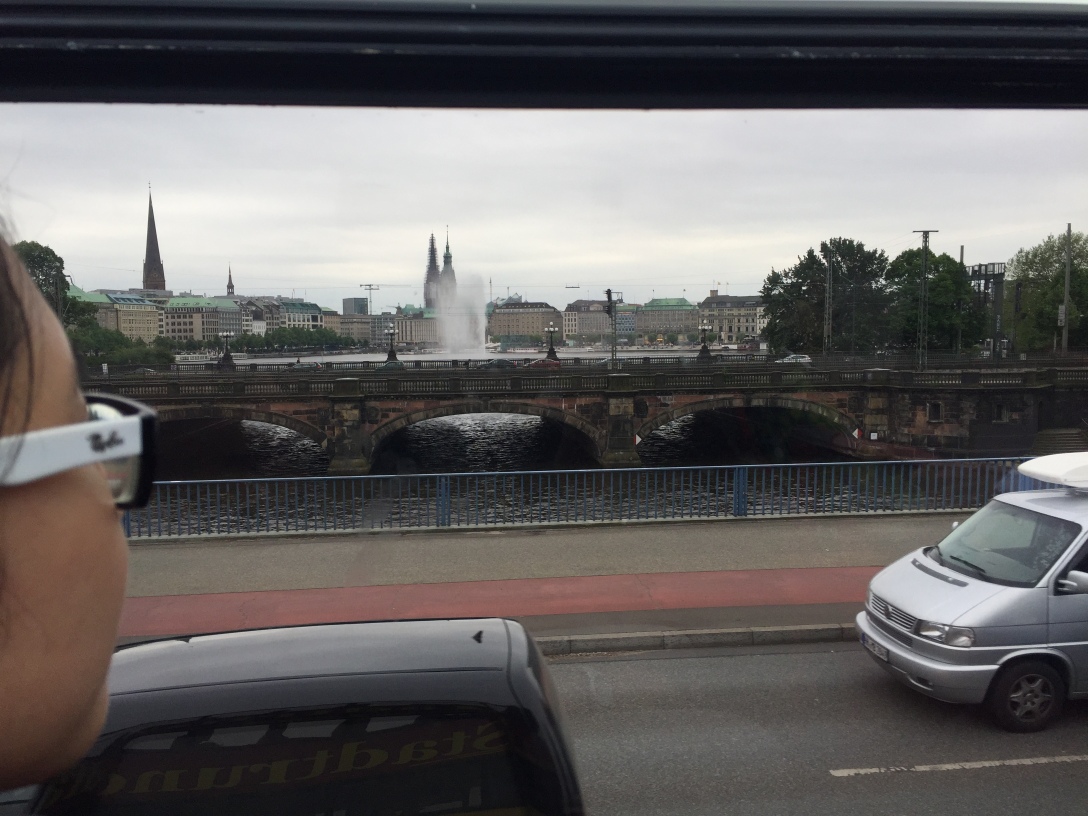 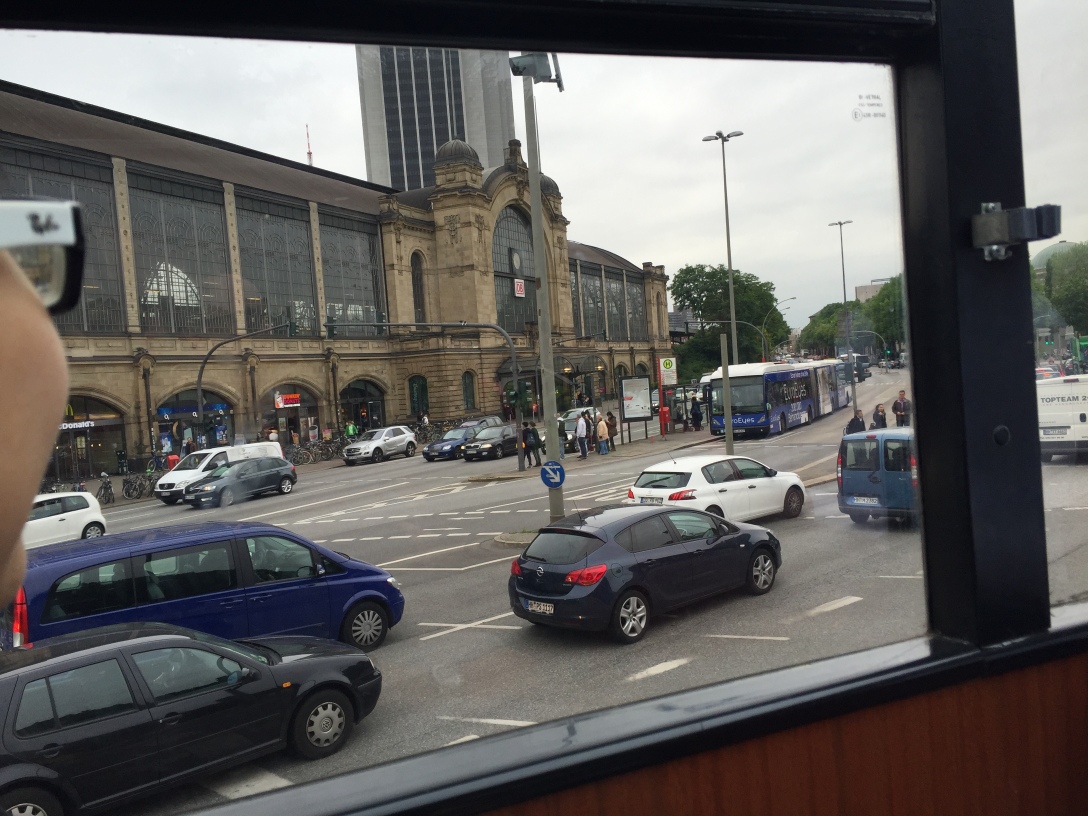 During our tour, we drove past a Mosque that stood out beautifully against the beige and dark red brick buildings of Hamburg.

There’s a huge amount of  “Bäckereien” here, but My favorite so far is a little chain cleverly named “Dat Backhus”. 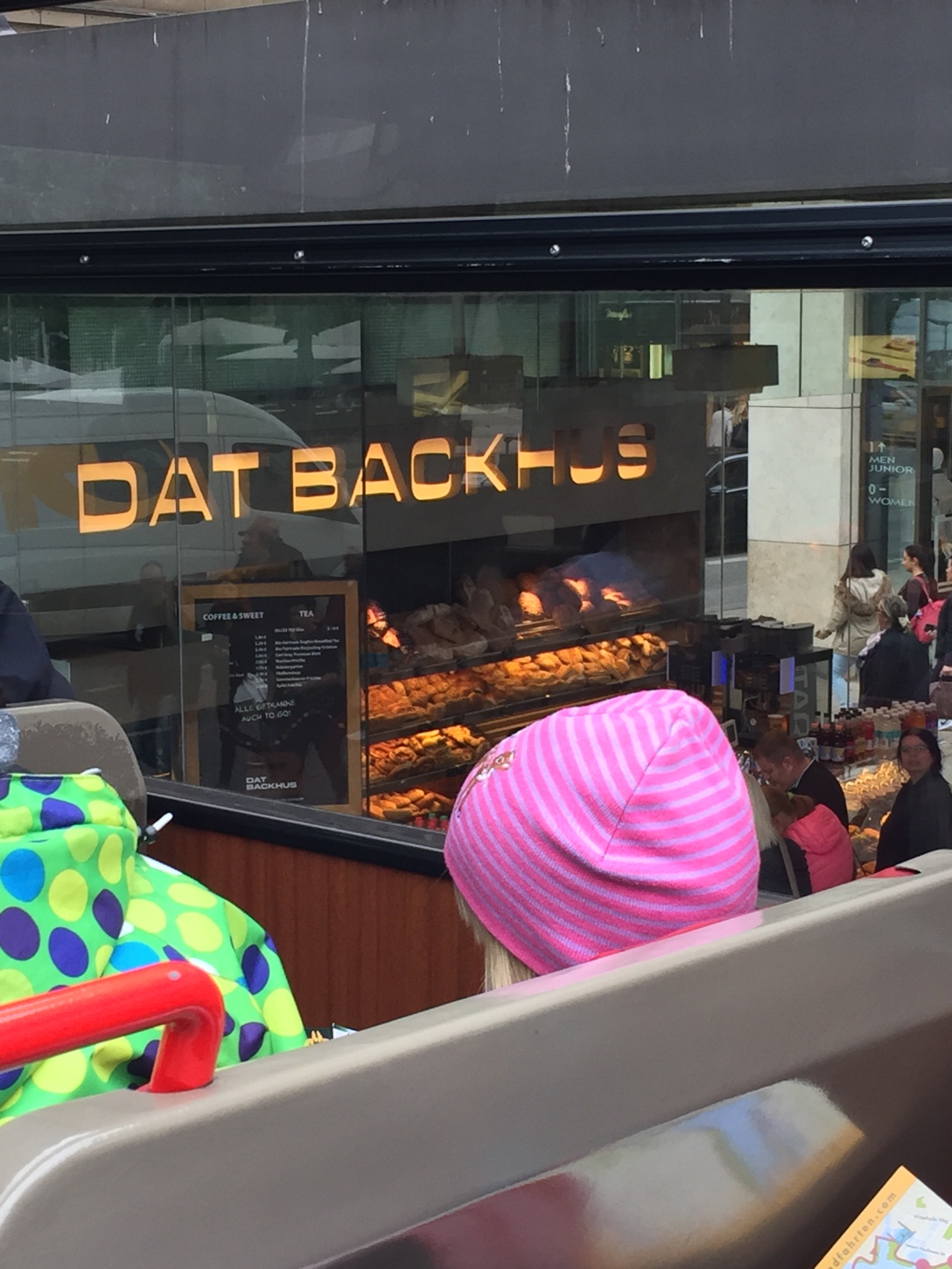 It turns out the US isn’t the only place who’s government is terrible at allocating tax money! This building built to look like waves of the North Sea, locally named “Elphi”, was originally estimated to cost 241 million euros, but is now looking like a good 75o million euros. 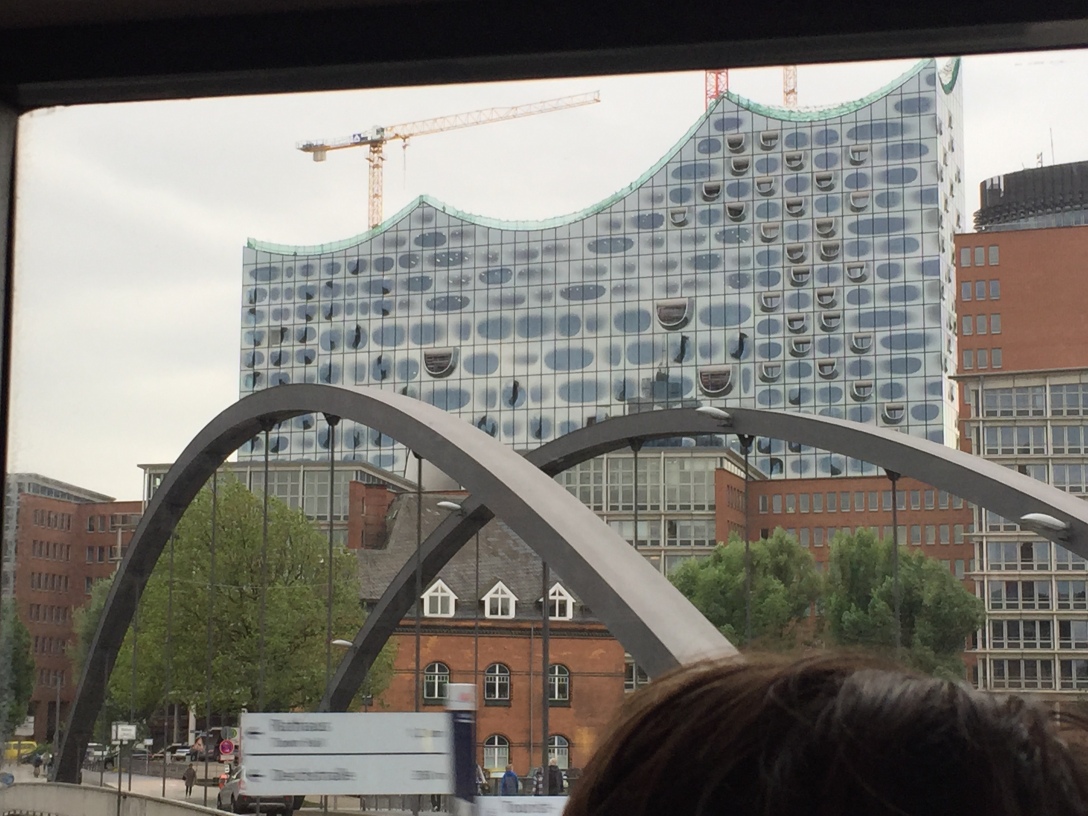 After the tour, I made the brave journey to find a grocery store, as the last thing I had eaten was a croissant for breakfast on the plane. I managed to find a nice grocery store, similar to a harris teeter but smaller, and was pleasantly surprised that I could buy all my groceries here for about 28 euros.

I took the U-bahn back to my place, and made pasta with some sauce I bought that was like a mixture between marinara and Sriracha, so heaven, and sat next to my window and enjoyed the view as I ate.

After Dinner, I met with Thomas, a friend who lives in Hamburg that Steven (my boyfriend) introduced me to. We went to his place and got to know each other while drinking beer and wine made here in Hamburg, and listening to Helene Fischer, the German equivalent to Kylie Minogue, who apparently has the German gay community following of Lady Gaga.

It was a long first day, but I got to see a lot of the city, and hopefully met a good friend for when I’m here for the next two months. All in all, I’d say it was a pretty successful first day.