Mostar was a special place to me during my research for Bosnia previous to coming here, and I plan to go back if possible when one of my friends arrives from DC for a week there (if my schedule allows, of course).  The segments below about Mostar are from previous research, and it helped a lot to physically see it (though it’s changed a lot of my thinking anyway living here in Bosnia).

We rolled up in the bus and on the main streets, you still see buildings that look like this: 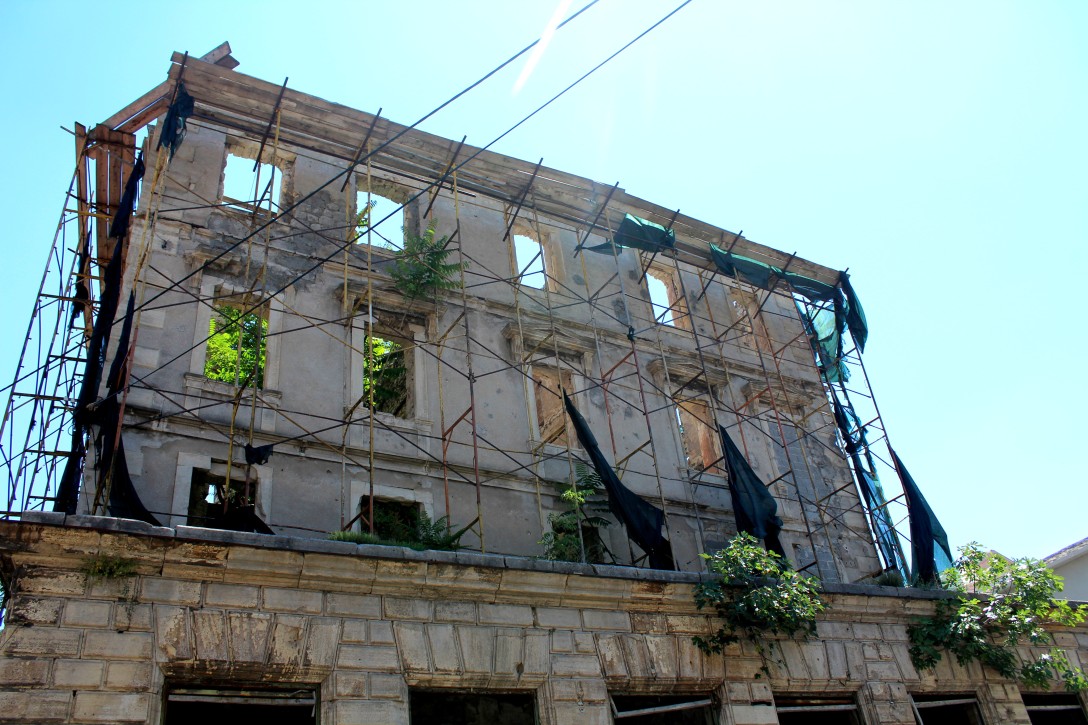 But turn to your right, and you see this, an entrance to a walk-only cobblestone area. 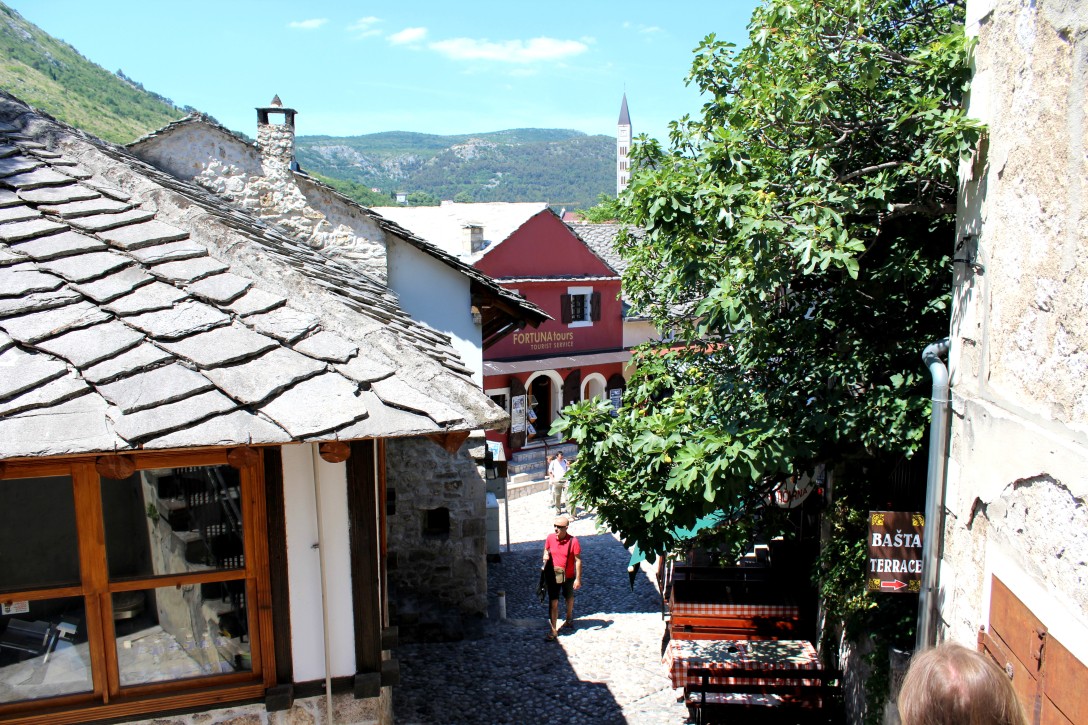 Mostar is a divided, ancient city in southern Bosnia [Hercegovina]. Built in medieval times along the Neretva River, the two sides were joined by a bridge constructed in 1566 by architect Mimar Hajrudin. The most architecturally innovative bridge at the time of construction, it became known as Stari Most, or ‘Old Bridge.’ In fact, the town’s name, Mostar, itself shares the Slavic root word for bride, or мост (mohst).

Now, though, you can see all worlds- a Muslim one, a Croatian one, an old one and a new one. 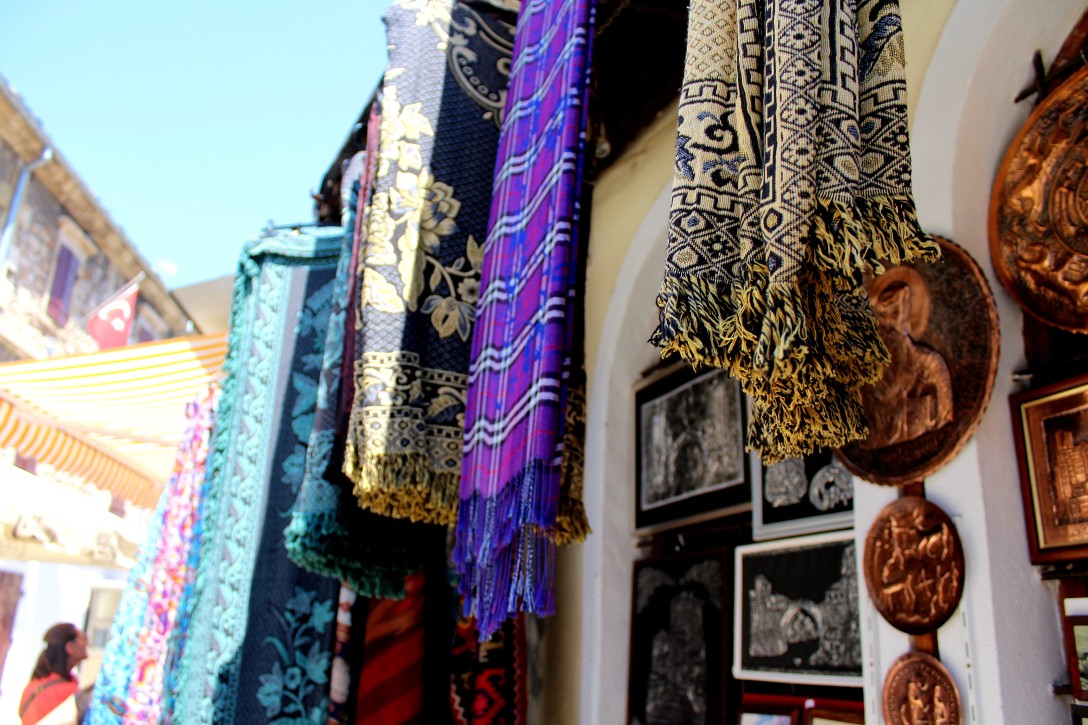 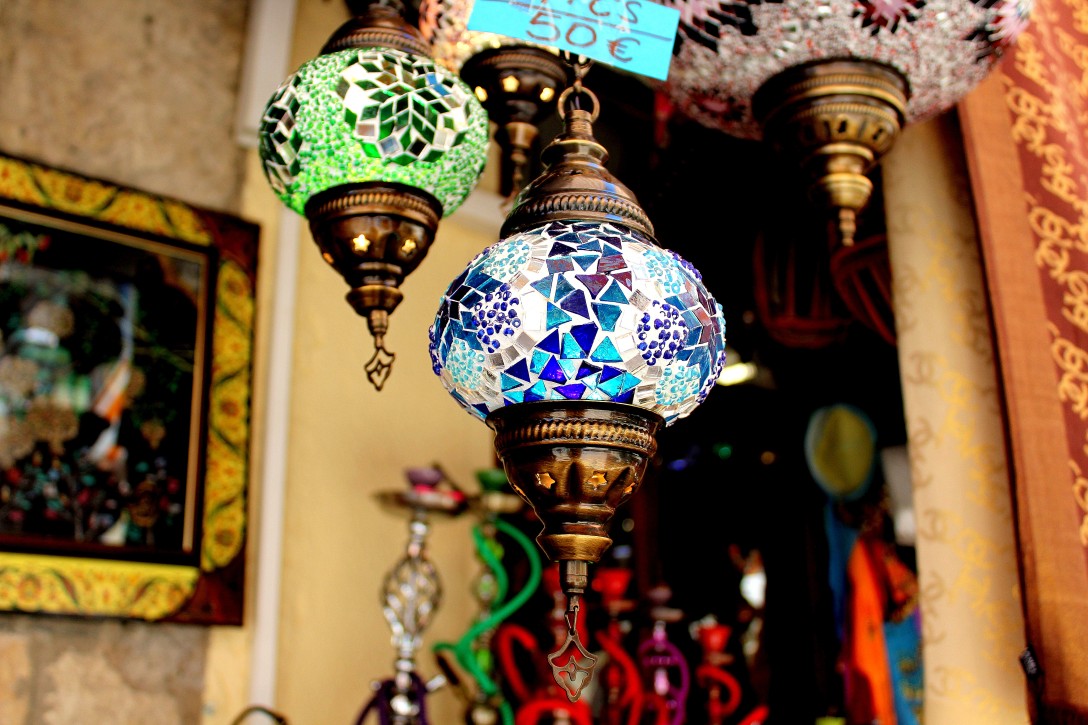 First, we went to a mosque, where Professor Dardagan explained a bit about the history that I described above.

Next, we went to a traditionally Turkish home. 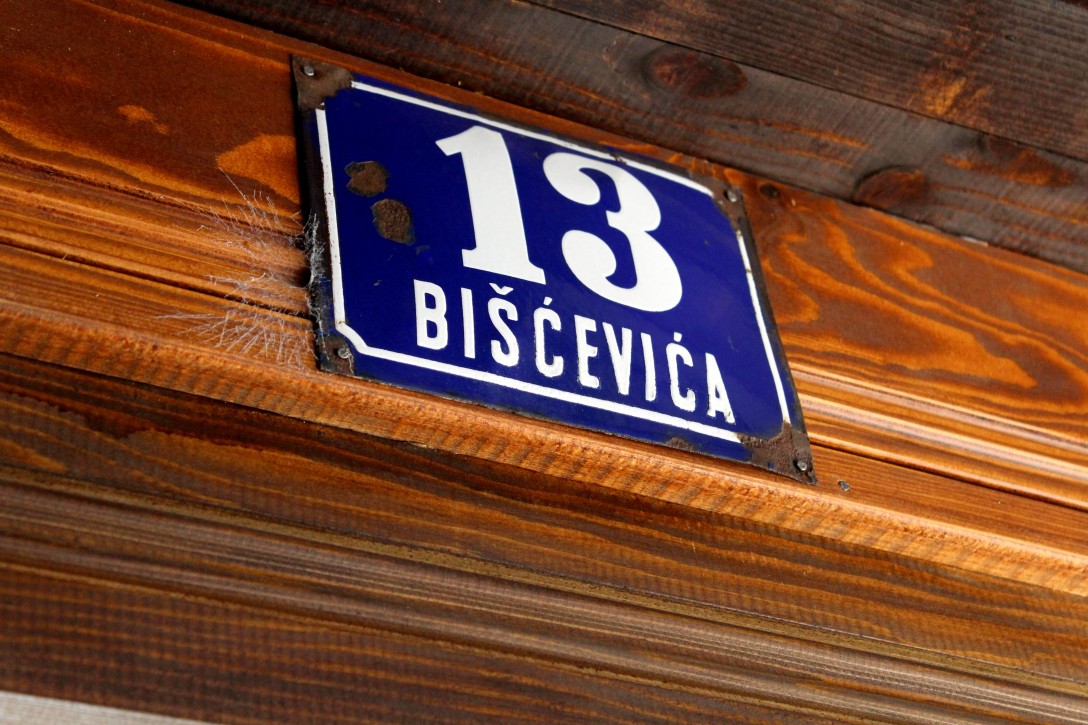 The outside area, shown below, was for the horses, catttle, and whatnot.

Inside this was the courtyard, meant for everyone to mingle. Almost every Turkish house had a fountain in the middle because water plays an important symbolic role. 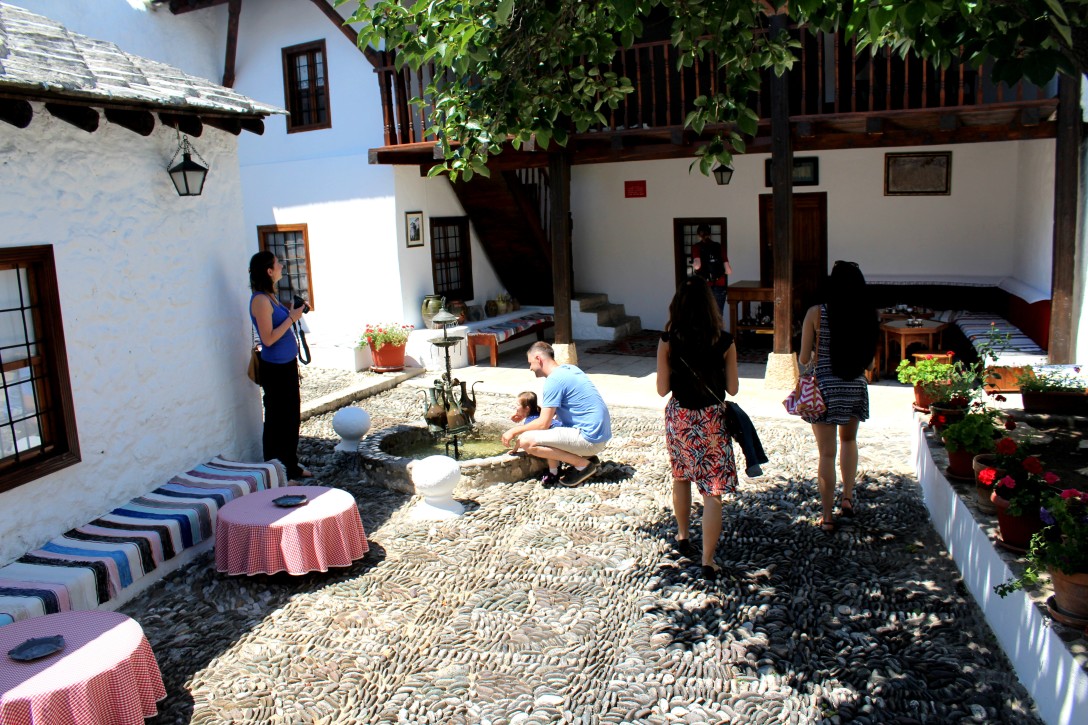 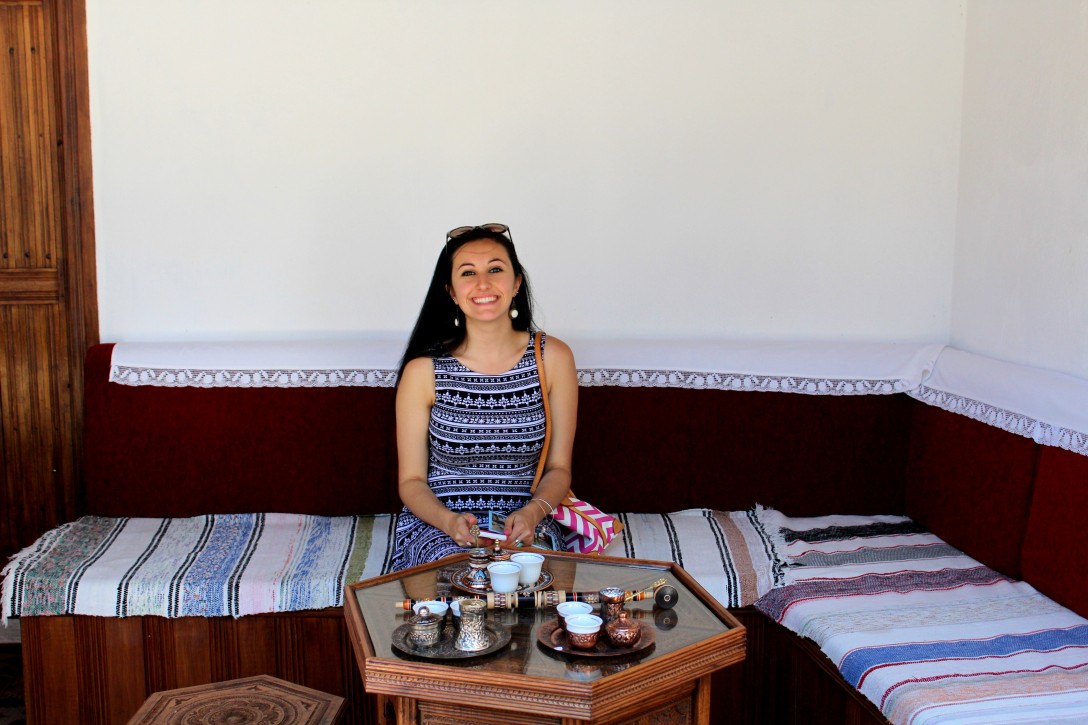 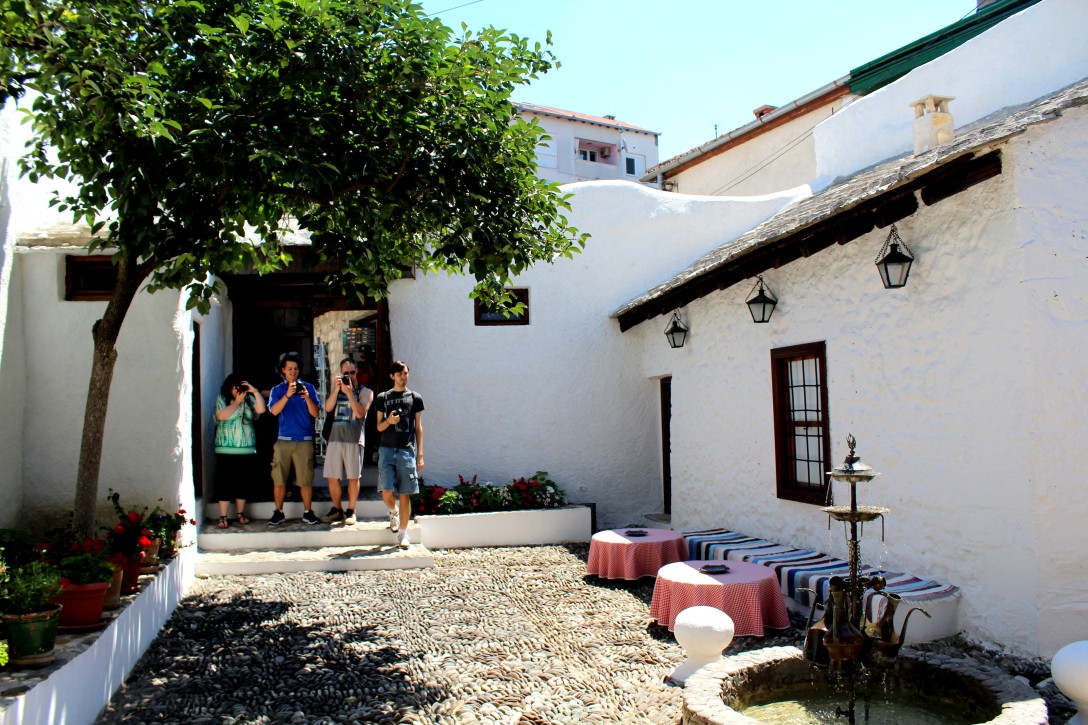 To go inside, however, you had to take off your shoes and climb these old, small, rickety stairs. Everything was covered in carpets woven here, the family carpet-loom, on a balcony overlooking the courtyard.

This was the women’s bedroom:

And this, my favorite room in the house, was the men’s sitting room. It had a beautiful view, was cool because of the whitewashed stone walls, but offered an amazing amount of light and comfort. New library goals set.

They had traditional Turkish wear for women (ironic, since this was a room for men), that I elected to try on. 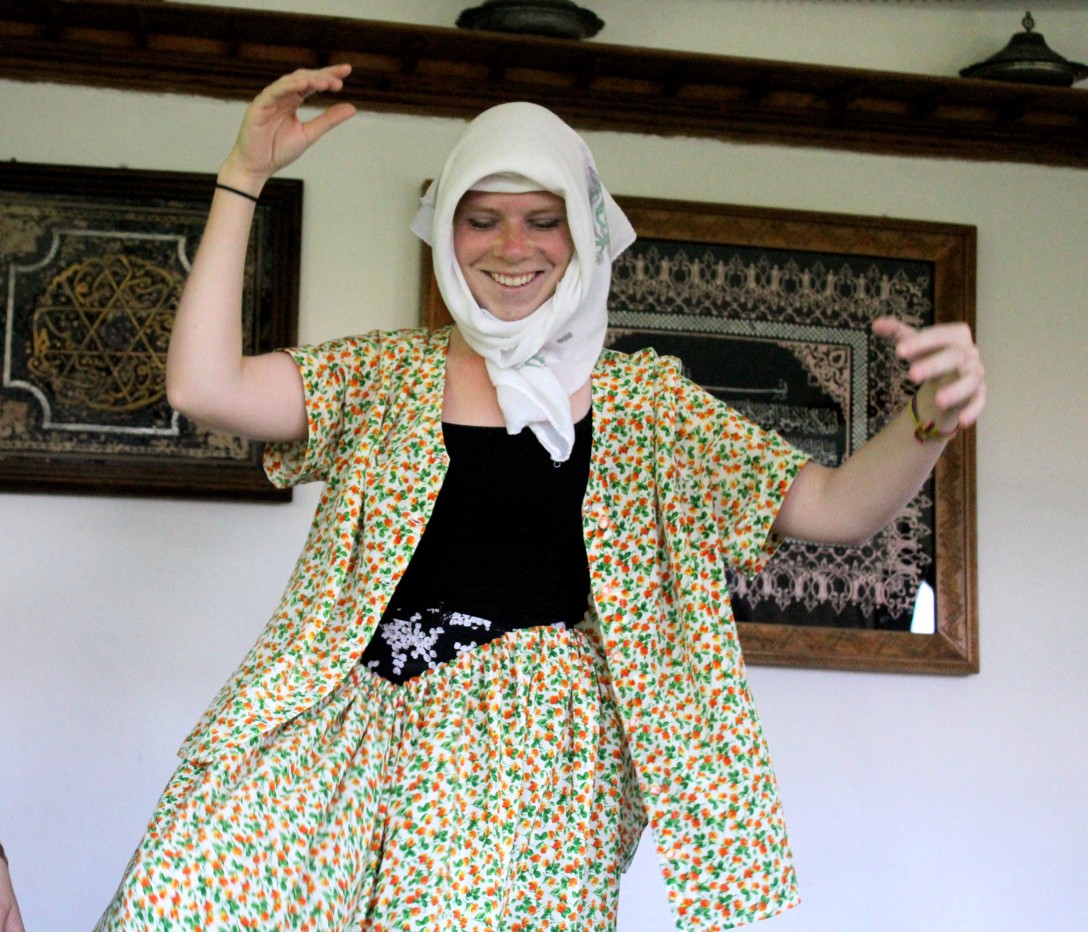 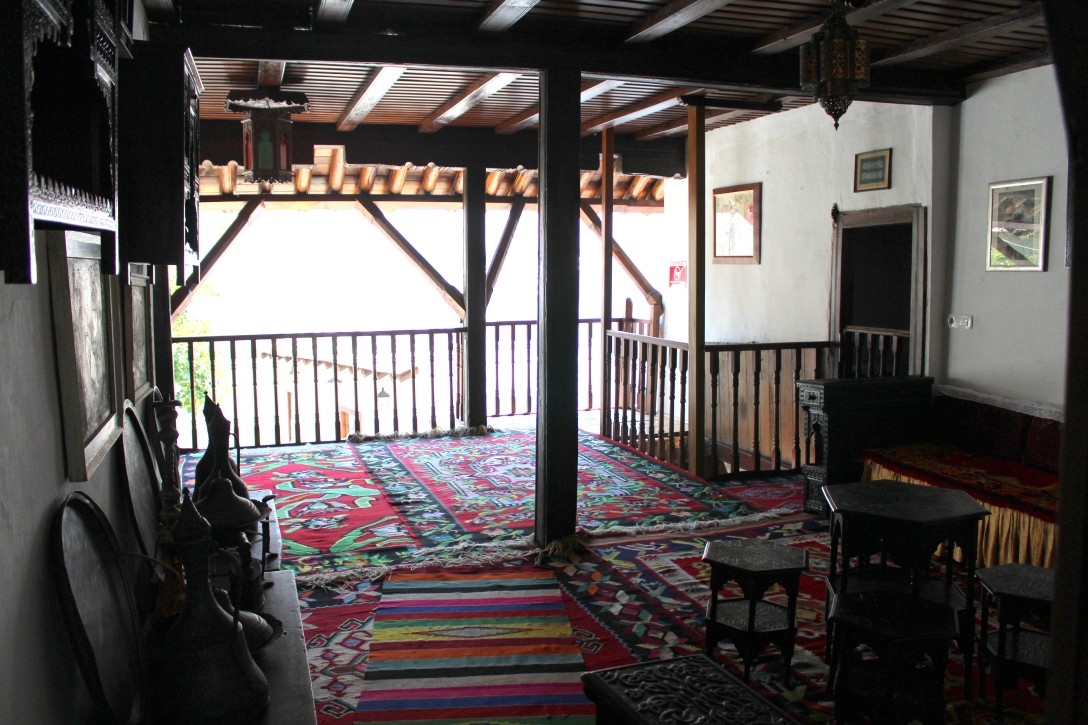 The kitchen was located downstairs and full of utensils used to make coffee, tea, burek, and other traditional dishes. 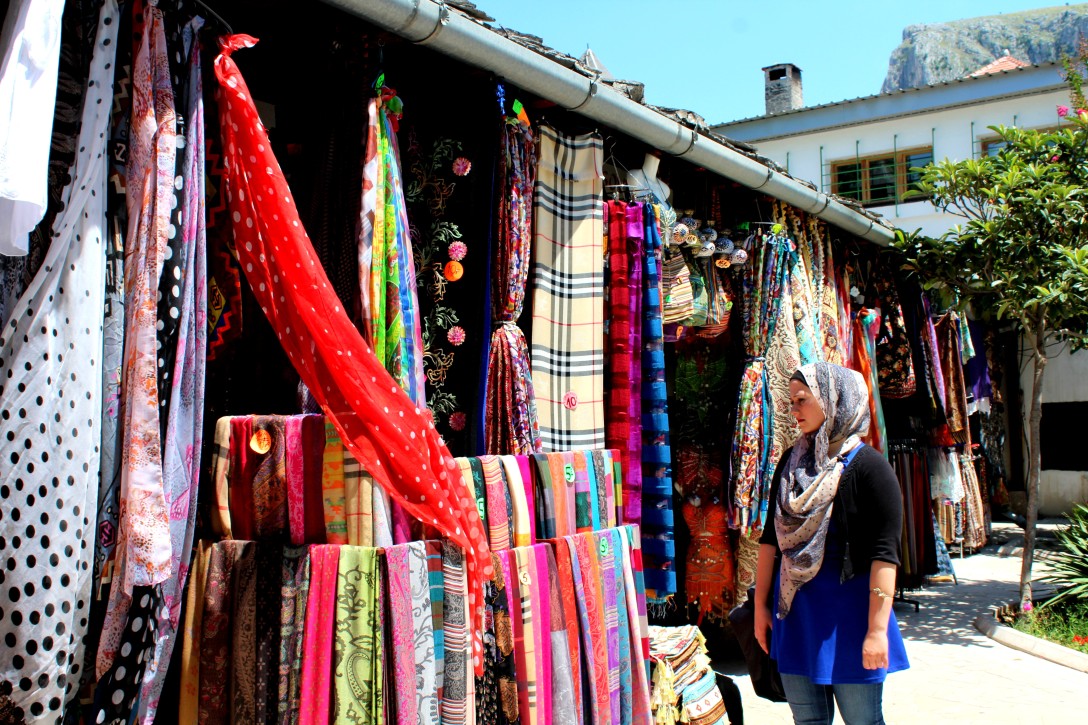 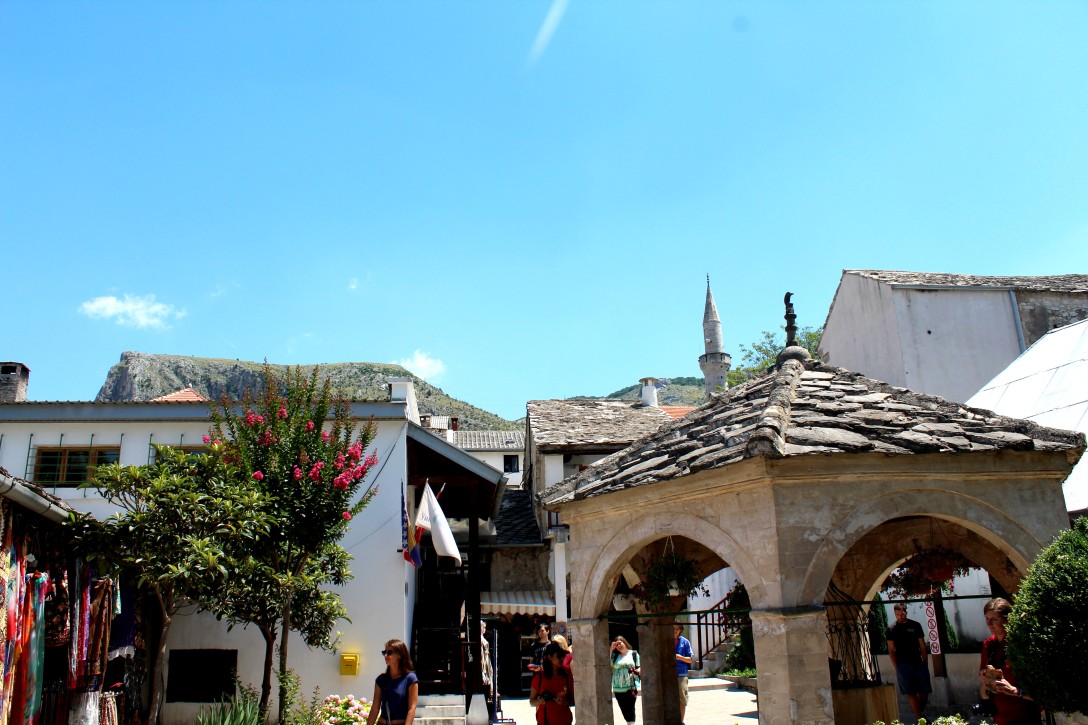 We went to another, larger mosque, where I had to wrap my legs in a cloth to enter. The small platform in the back is the space for women (only men are allowed to go inside and worship), and the vine design is unique to mosques in Mostar, though because impressions are not allowed, forms of calligraphy are what decorate most mosques. 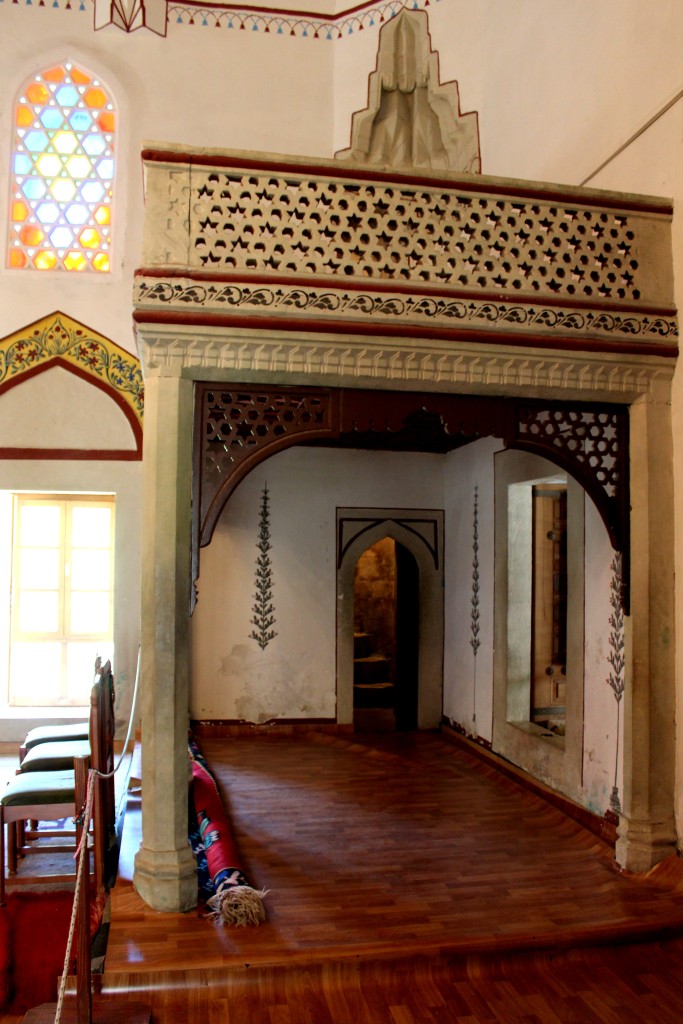 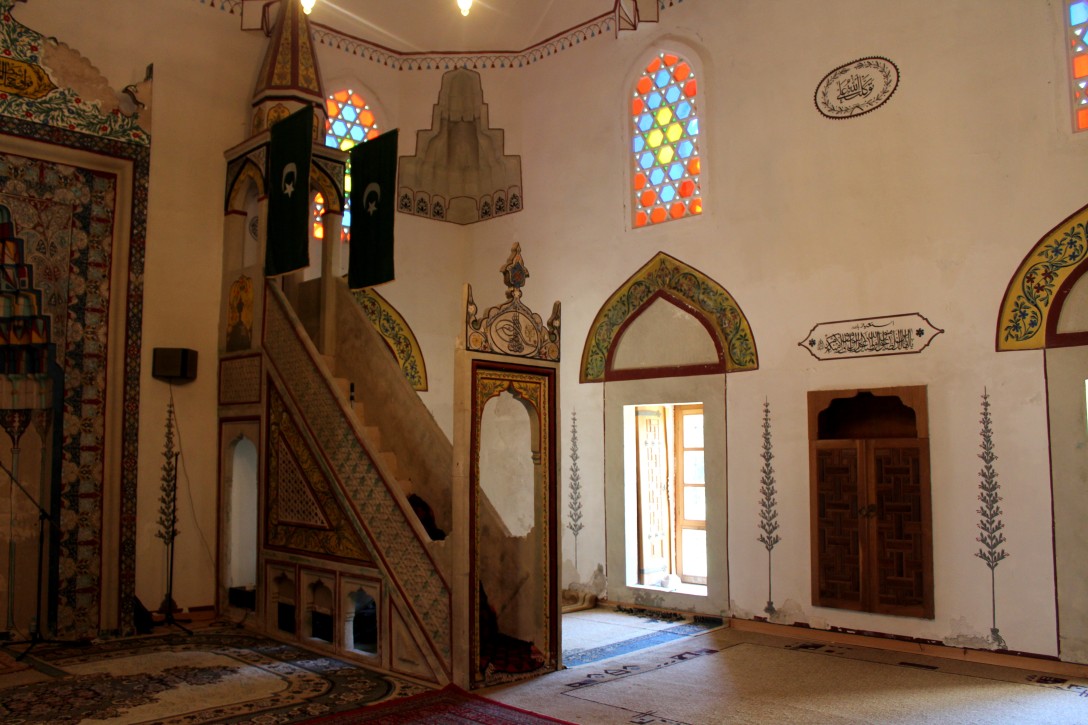 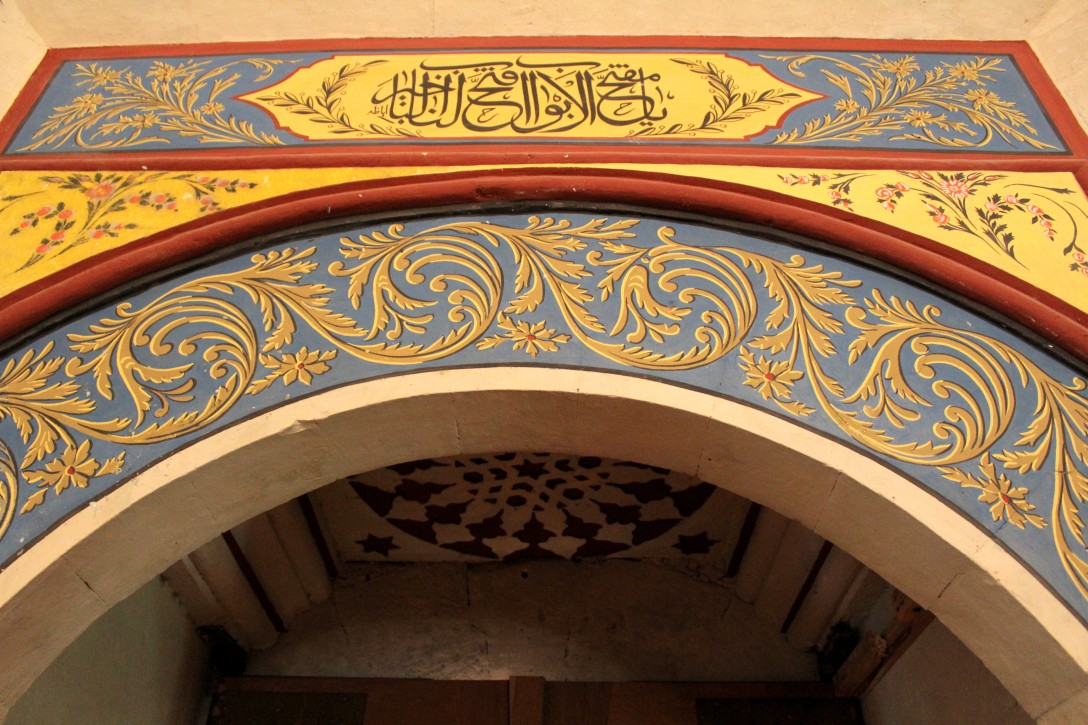 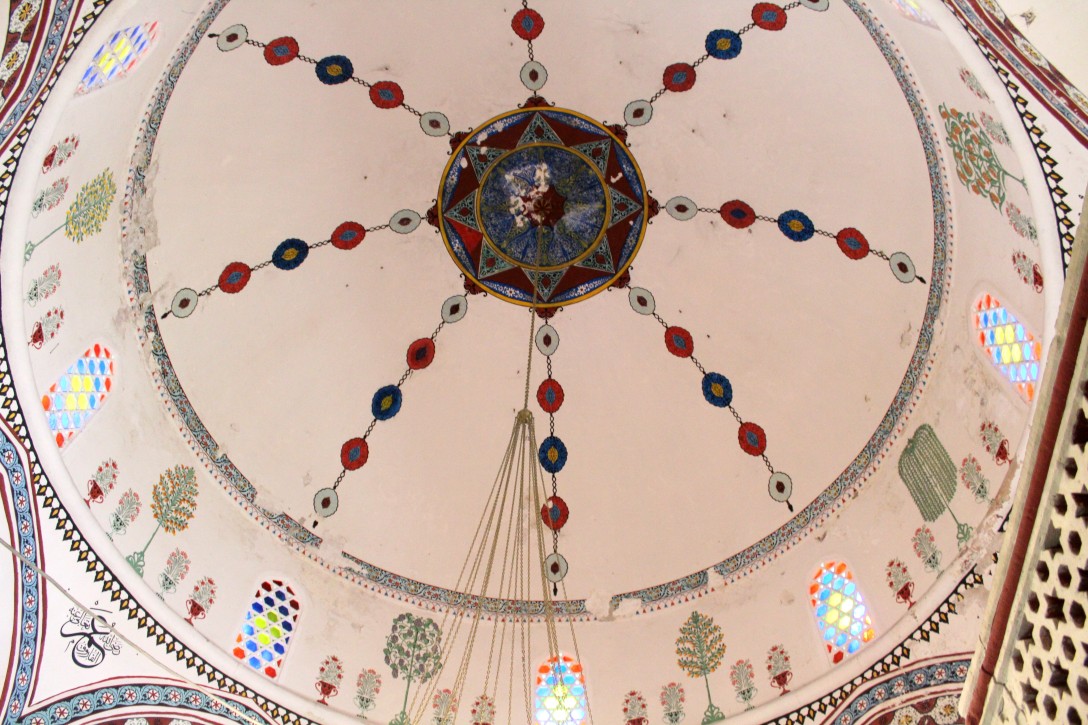 I paid 10 km to climb the minaret, which was absolutely tiny and quite tall. Arnela entered first, reminding me of the witch making her path to Rapunzel. 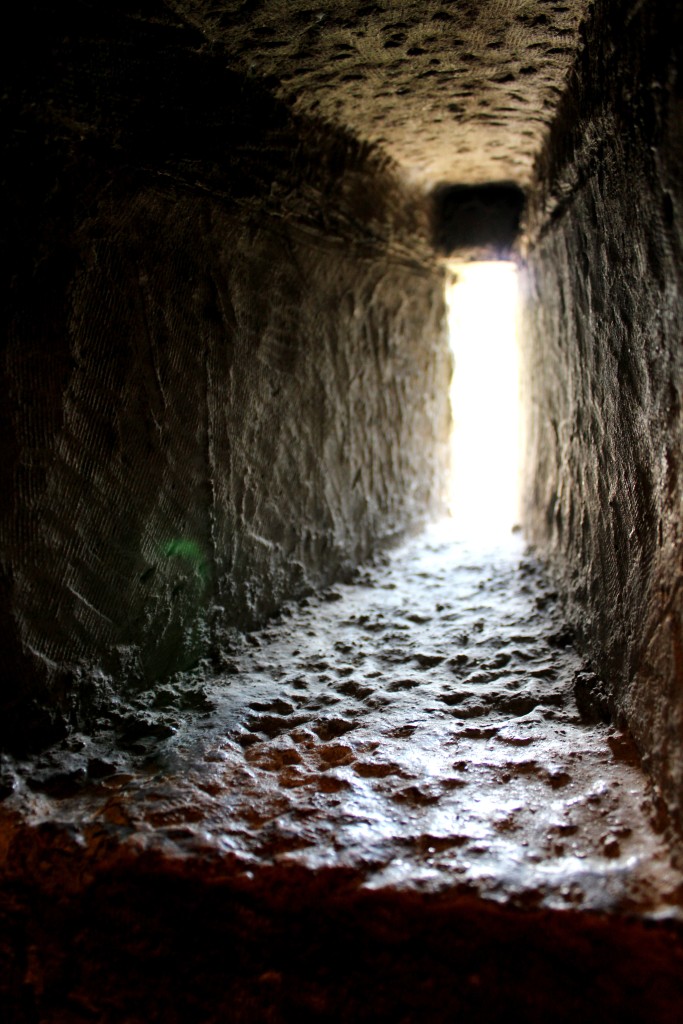 After a long, dizzying climb, we emerged to this view of Mostar. 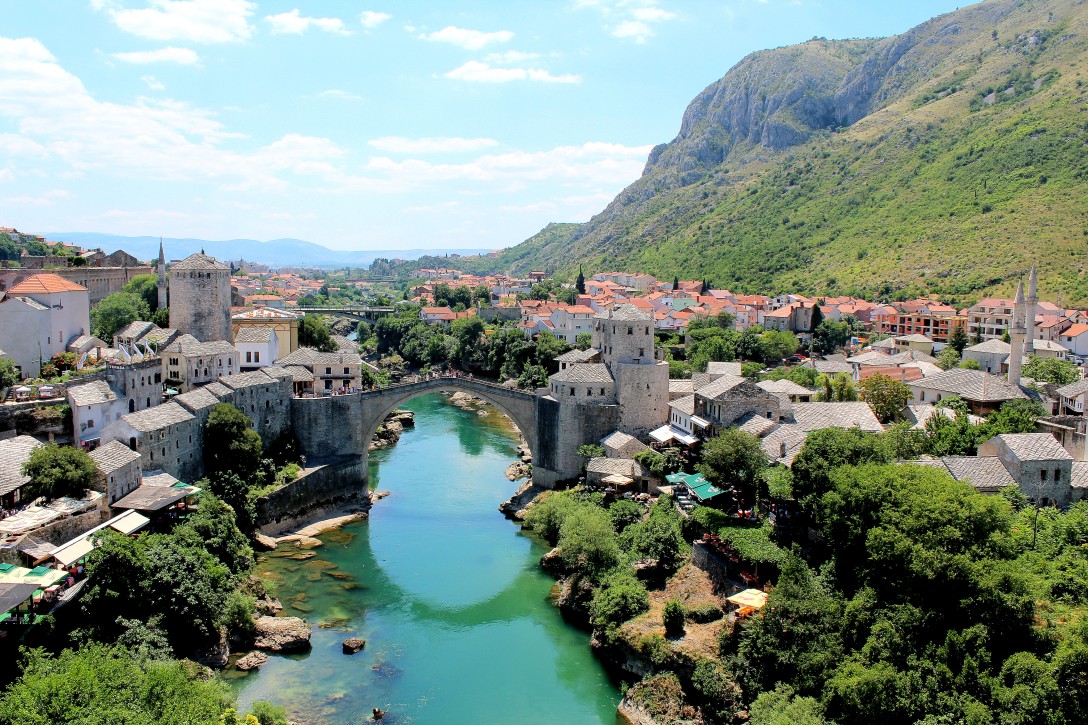 The semiotic apogee came on November 9, 1993, when Croat forces destroyed the bridge, bombing it at the apex and watching as it fell into the river, turning the water red and sparking the observation that, ‘the war even makes the bridge bleed.’

Mostar experienced the international response through OSCE, IFOR, SFOR, the UN, and others, as well as the response after the Dayton Accords. After these ceased, though, Mostar was still a divided city, though perhaps not through the extreme overt violence it had experienced before. The two sides were still divided; the government was split ethnically, Croat and Muslim students attended different schools at all levels with different curriculums, and neither side traveled to the other. Mostar became the site where micro peace approaches were taken because they were needed. 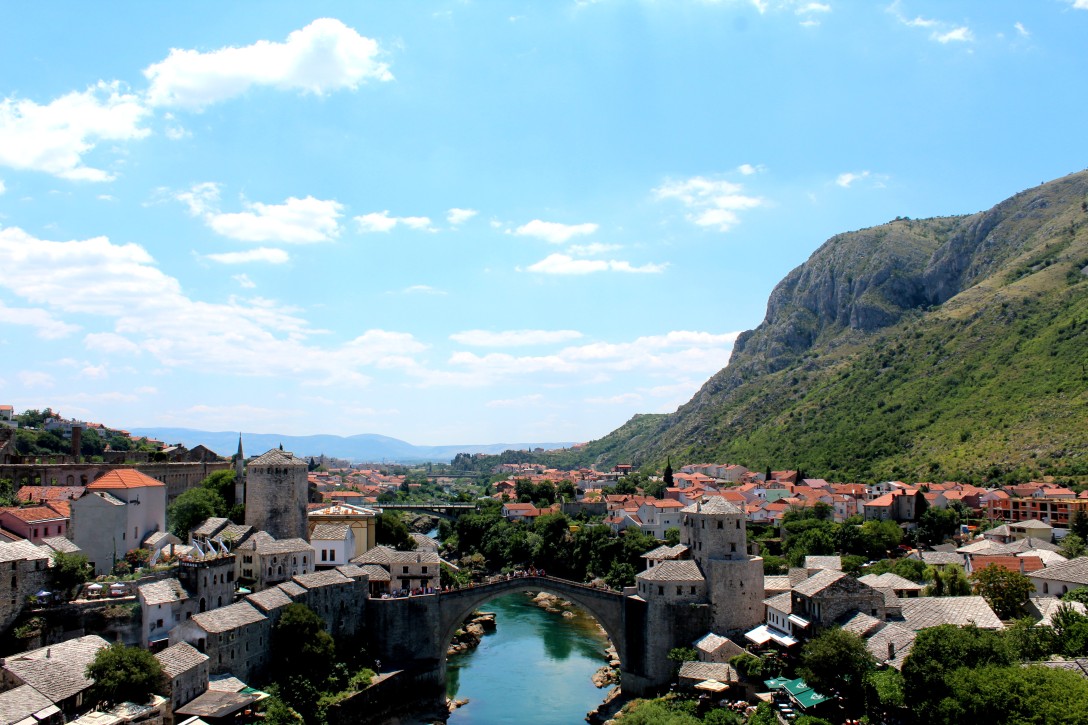 In 2004, the bridge was reconstructed under the auspices of UNESCO and the Mostar monitor from the Contact Group in as close a replica of the old one as possible, a literal bridging of the divide between the Croat west and the Bosniak east…The French architect responsible for the construction, Giilles Pequeux, hired both Croatians and Bosniaks to work on the bridge. When he realized that the ancient construction of the bridge had included both European and Muslim methods of stonemasonry (adding to the semiotic significance of the bridge, that when it was constructed so many centuries ago it was done so by both Christian Slavs and Muslims), he asked France to finance a school of stonemasonry, where he taught both Croats and Serbs both ways of stonemasonry so that the bridge could include them, as the old one had (Ignatieff, 2002). And so the bridge was constructed by Croats and Bosniaks in a replication of a bridge constructed centuries before by both Muslims and Christians, in an effort to connect Croats and Bosniaks torn by war.

Michael Ignatieff, director of the Carr Center at the Kennedy School of Government at Harvard University, wrote a piece for the NY Times magazine in 2002 on the construction of the bridge. After elaborating on the metaphoric significance of the reconstruction, he observes that of the bridge construction: ‘Whatever other people want to be, they do not want to be forced to be us. It is an imperial mistake to suppose that we can change their hearts and minds. It is their memory, their trauma, not ours, and intervention is not therapy. We can help them rebuild the bridge. Whether they actually use it to heal the city is up to them’ (Ignatief, p. 4). Despite these doubts, the process of including everyone, and the imitation of what previously existed as a display of what might be, was a promising development. More than ten years after Ignatieff’s piece, the bridge, while not a panacea to Mostar’s problems, has no doubt fulfilled part of its potential as a means of peacebuilding in a divided society.

The other side of the minaret looked like this (the water is naturally that color). 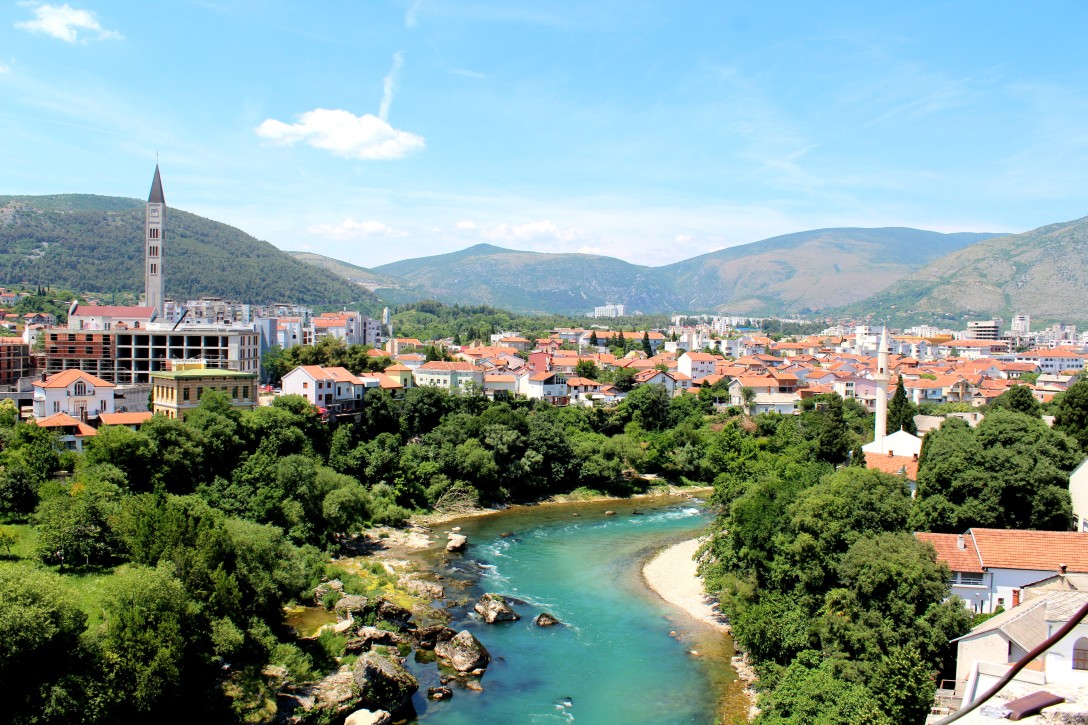 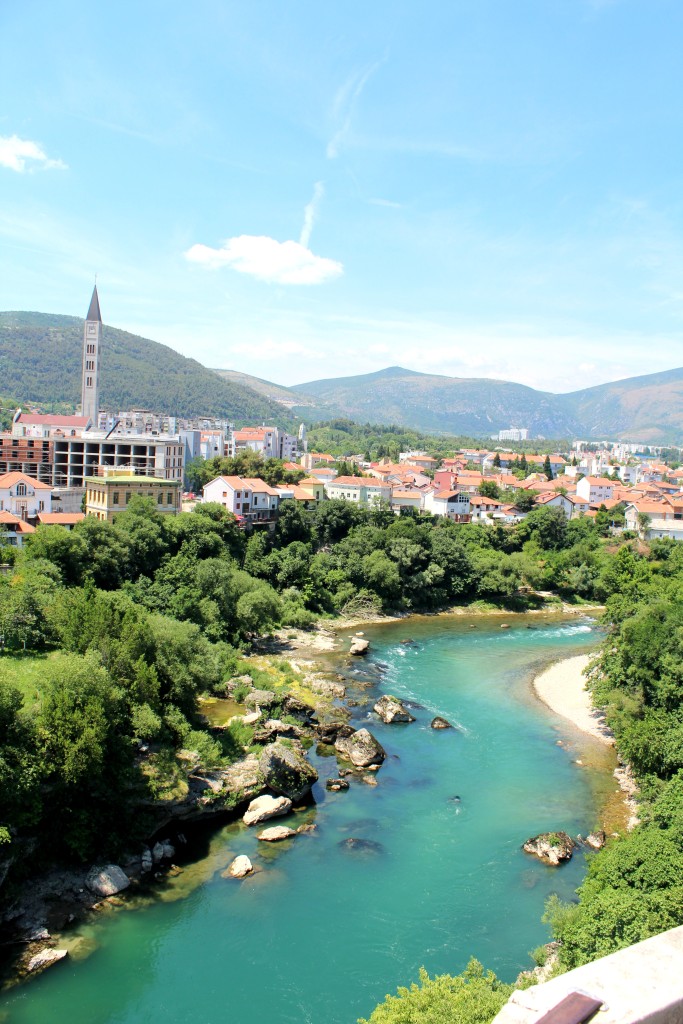 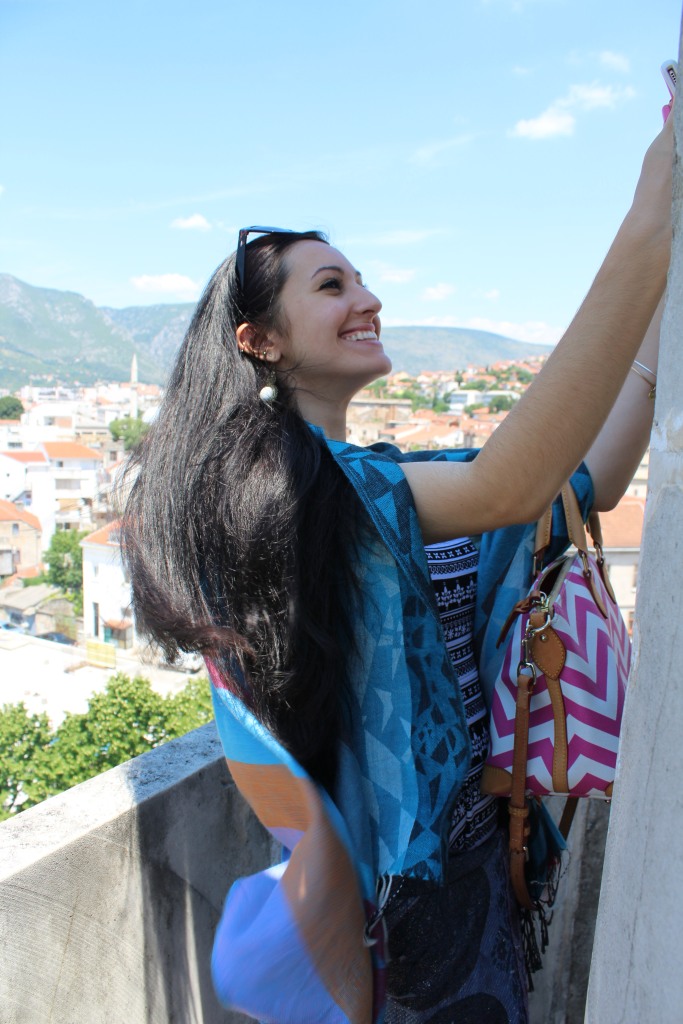 We quite took the opportunity for pictures, though I could have easily sat up there for hours with nothing but the wind and the occasional pigeon for company. 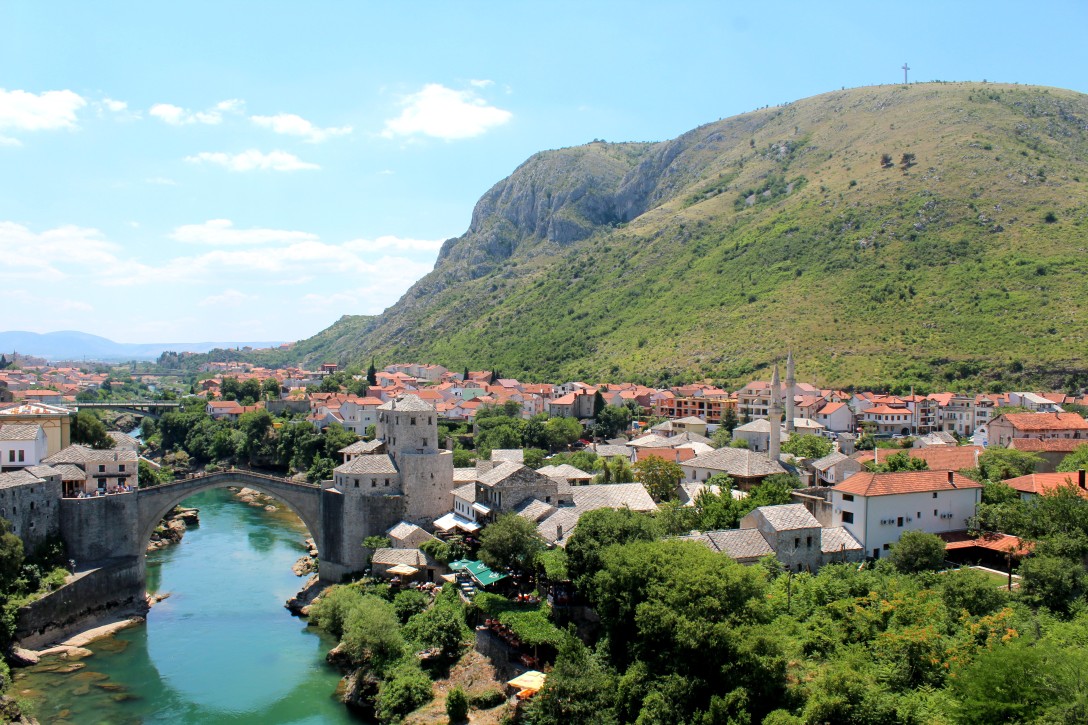 Tomorrow we’ll go down the minaret and across the bridge!